Away relatively early to head up into the Pyrenees above Pamplona and check out the wooded hills before crossing over in to France.  My last Spanish birding and after today equipment away for the long drag through France to the Calais - Dover ferry.  Birding to be resumed, hopefully, once back in the UK when I hear Rutland Water and Frampton Marsh calling.  No sooner had I left the hotel and I continued to witness many Common Swifts which, to me, suggests that there is till not only a plentiful supply of insects but that these birds are also finding suitable nesting sites.  The occasional Barn Swallow but regular sightings of both Wood Pigeon and Magpie.

No sooner out in the countryside and I cam across a pair of Carrion Crow and another in the the foothills.  I also managed o come across a couple of Buzzard but it was the first Black Kite of the journey that was really impressive. I also had a a couple of Common Kestrels and, of course, local House Sparrows and Spotless Starlings.

Having reach the recommended site up in the wooded Pyrenees and paid my car entrance to drive to the local reservoir, I settled down in the h of finding a woodpecker or two.  Chaffinches calling all around me and much evidence of previous work by the woodpecker gangs judging by the rotten trees and their tell-tale holes but then a movement away to my left.  Bins on the subject and look very much like a Great Spotted Woodpecker hammering away at the side of the tree but more often than not out of site.  An amazing amount of cascading sawdust as a result of the bird's endeavours.  Photograph taken as best I could and then the bird was away.  That was to be the only woodpecker seen but on looking at the camera it would appear that I had made a mistake; not a Greater but a Middle Spotted Woodpecker.  Then, once a more detailed examination of the bird it was deemed to be the very rare White-backed Woodpecker!  Knowing the size difference between the British Great and Lesser Spotted Woodpeckers you (wrongly) assume that the same would apply when considering Middle Spotted or White-backed.  My best piece of advice might be to think of the alternative name for the Greater Spotted being a Pied Woodpecker with a large white slash on the wings.  This is not the marking of the White-backed Woodpecker which appears about the same size but with more of a "rounded" rather the "flat" head.  What a wonderful turn-up for the proverbial book as far as I was concerned.

Then, on the way back to the car park a (northern - European) Tree-creeper on a fallen log at the side of the narrow concrete road that beat a hasty retreat to the neighbouring trees.  Enough for a good view and listen even if no time to reach for the camera.

Wonderful views as I cross over the top into France and, on the almost summit on the Spanish side, a chance to watch a trio of soaring Griffon Vultures.  As far as France was concerned, the only birds of note were the occasional Buzzards and a Jay that flashed across a mountain road in front of the car.  But, approaching Poitiers, I did come across a single Turtle Dove on the ground; just goes to show that some survived the migration guns and even the local huntsmen. 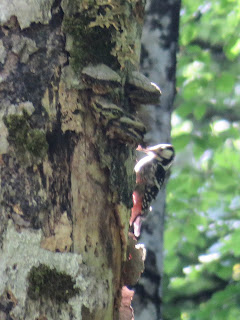 Check out the accompanying website at http://www.birdingaxarquia.weebly.com for the latest sightings, photographs and additional information
Posted by Bob Wright - The Axarquia Birder at 05:20