A little cloud but still warm as I made my way to Charca de Suarez for a morning visit with friend Derek Etherton.  Steve and Elena Powell also attended but somehow manage to miss us as they, presumably followed out track but about 400m in arrears.  Eventually met up when we all retired back to my house for roast lunch prepared by Jenny.

Whilst it might be true to say that there were no too many birds on view, it is easy to take for granted the number of Red-knobbed Coots, Purple Swamphen and a rather lovely Purple Heron.  Approaching the site the drive along "Turtle Dove Alley" produced both Collared Dove and a couple of Bee-eaters followed by Zitting Cisticola and the usual House Sparrows and Spotless Starlings.  We even had a Hoopoe on the wires moving down the concrete track and a second was recorded after leaving the site to make our way back to the motorway.

Entering the reserve a couple of Backbirds and many Nightingales, including youngsters still being fed by parents, along with rather vociferous Reed and Cetti's Warblers.  The Laguna del Taraje was rather quiet with a couple of Common Coot and Moorhen with well-grown youngsters as well as a couple of Mallard families.  And all the time the continuous calling of Turtle Doves, a lovely sound to behold.  A Grey Heron flew over and then a very brief appearance by our first Purple Swamphen of the morning.


Moving on to the Laguna del Alamo Blanco even less activity - at first.  Yes, the resident White Stork was back on site along with two pairs of Black-winged Stilts.

A high and distant Booted Eagle flew over in front of us and then we found the single Little Ringed Plover at the back of the water.  All that activity and almost missed the Water Vole that suddenly swam out and back into the reeds.  More Common Swifts, Barn Swallows and House Martins feeding above the water.  Then movement in the flowering grasses towards the back revealed a small flock of feeding Common Waxbill.  What busy little birds these are, never really still for long periods.

The Laguna de las Anas held very many Common Coot and a couple of Little Grebe along with  maybe a score of Mallard.  A second Grey Heron flew in to settle on the island in front of the hide where we also had good numbers of Moorhen.  Just the one Black-headed Gull on site.

A stop to watch the active Spotted Flycatchers before reaching the Laguna del Trebol where we found all our Red-knobbed Coots along with a well-concealed Purple Heron.  Now we also had Pallid Swifts flying over the water.

Continuing on round a re-visit to the first water produced nothing extra whereas the Laguna del Alamo Blanco now had a trio of Black-rumped Waxbill feeding on the grasses along with their Common Waxbill cousins.  Finally, as we made our way back to the gate, lovely to see a fly past by a Sparrowhawk, our second raptor of the morning. 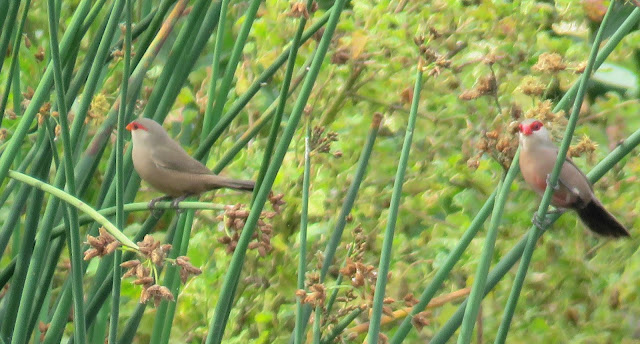 Check out the accompanying website at http://www.birdingaxarquia.weebly.com for the latest sightings, photographs and additional information
Posted by Bob Wright - The Axarquia Birder at 03:36