Another lovely sunny day so able to spend a few hours up at the Charca de Suarez near Motril.  Not a lot of birds about and very strange not to see the resident White Stork but still some lovely sightings.  On the other hand, a short pre-visit trip up to the picnic site at Velez de Benaudalla was an almost complete waste of time with as early as 9am picnickers already arriving along with a group of at dozen older (18-22) lads who already had car doors open so the the "music" could blast out.  Not much chance of a Chaffinch nevermind the local Spotted Flycatchers, potential Golden Oriole and the Dipper, if still breeding at its traditional site.  So, picking up a Black Redstart on the track back if was straight off down to the Charca and taking the "Turtle Dove " Alley route which produced Common Swift, Kestrel, Zitting Cisticola and a large number of Spotless Starlings.


Once at the Charca,  good views of the local Blackbirds and the House Martins and Barn Swallows were up and around.  First stop at the Laguna del Taraje produced families of both Mallard and Moorhen along with a pair of Coot and many vociferous Nightingales and Reed Warblers.  A lone Purple Swamphen put in a very brief appearance and after hearing the calls I was joined by a pair of Turtle Doves but too many branches in the way to try and get a photo.  Then the first of the morning's Cetti's Warblers started off with a great blasting of sound very close to hand.


So on to the Laguna del Alamo Blanco which was very quiet by usual standards.  A pair of Black-winged Stilt and a handful of mallard until I spotted the small flock of very active feeding waxbills, on this occasion mainly Black-rumped but still a few Common Waxbill.  A Heron flew over followed by a few Common Swift and the occasional House Martin and Barn Swallow.  Then a single Snipe put in an appearance at the far end of the water.


More life at the larger Laguna de las Aneas but mainly Common Coot and Mallard though the result of this year's breeding did also produce a few Red-knobbed Coot.  A very close Little Grebe was surely a bird of the year judging by its diminutive size albeit in what looked like perfect adult plumage.

However, I did also note that our visiting Spoonbill was still at the reserve and even found the resting Heron.


A stop at the small spinney produced the first Spotted Flycatcher of the morning along with a quite handsome Serin.

Waking down toth Laguna del Trebol I had the occasional Yellow-legged Gull fly past overhead and at this water, again very quiet, just a few Red-knobbed Coot and a White Wagtail.  A number of House Sparrows looking over this water from the far side and good to see that Red-knobbed Coot number 290 is still with us as a long-surviving breeding bird.  Not sure, but this individual must be at least seven or eight years old.  A Little Egret dropped in and promptly lost itself behind the reeds and there were certainly many Collared Doves about.  A handful of Goldfinch and then strange to see a beautifully-plumaged Rock Dove feeding on the grass at the side of the track as I made may way back to the gate; no intention of flying away so letting his beauty be appreciated by all. 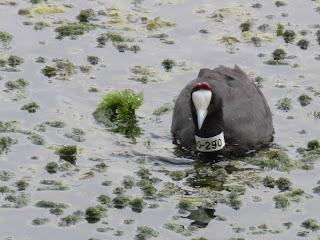 Finally, driving back along Turtle Dove Alley a small party of Red-rumped Swallows and a single Great Tit.  And just when I thought I was finished for the day, whilst having a drink with Steve and Elena back in Frigiliana a lovely male Hoopoe drifted past the terrace. 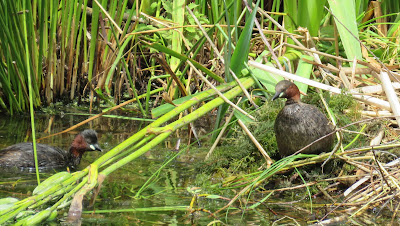 Check out the accompanying website at http://www.birdingaxarquia.weebly.com for the latest sightings, photographs and additional information
Posted by Bob Wright - The Axarquia Birder at 05:12