Nerja - and what a surprise!

Off to Nerja this morning along with Derek and Barbara Etherton and Jerry and Barbara Laycock in search of the visiting Allen's Gallinule.  Much searching up and down the lower River Chillar on both sides but no luck.  The bird was last reported two days so it may have departed, either by natural means or via the stomach of one or more of the numerous cats that we saw!  However, not all bad news in that we managed to record at least 25 species including a first (female) Reed Bunting for the year, not a common species out here, and then a Wryneck which hung around for almost half an hour giving good views.

Almost as soon as we arrived on site we had both White and Grey Wagtail along with House Sparrows and then a Common Sandpiper.  A number of Blackbirds were busy feeding and drinking whilst above a steady movement of Rock and Collared Doves along with Spotless Starlings.


The occasional Greenfinch was seen and then both Goldfinch and Robin.  A Blackcap was taking advantage of what looked like a leaking water pipe to actually take a shower!


Working our way back up stream Derek and I were watching a female Reed Bunting when attracted by Barbara (Etherton) who had  found a Wryneck.  What a lovely surprise as the bird seemed faithful to the immediate area for almost half an hour and was still present when we were joined by Ricky Owen and Kevin Wade, both of whom had also driven up from south of Marbella to try and locate the Allen's Galinule. 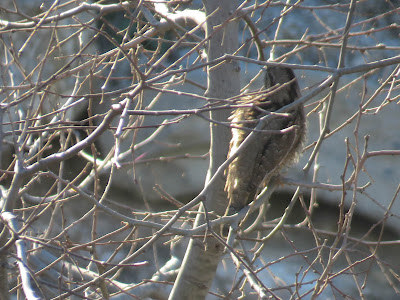 A Cetti's Warbler suddenly started "shouting" its presence and then we were also made aware of the numerous Chiffchaffs feeding in the bushes and trees below.  Sardinian Warbler were seen and then a pair of Linnet.  Lovely to see the Serins with the males looking very handsome in their fine, yellow livery and one could not help but be deafened by the Great Tit singing above us.


Two Meadow Pipits near the water and then a pair of Stonechats.  making our way home we even had a Little Egret upstream of the road bridge.

Check out the accompanying website at http://www.birdingaxarquia.weebly.com for the latest sightings, photographs and additional information
Posted by Bob Wright - The Axarquia Birder at 11:51