Well, here we go again as John and Jenny Wainwright take off to the south-west in search of the recently seen Red-breasted Merganser, Rose-coloured Starling and Sociable Plover.  Two out of three is better than nothing and only dipped on the starling!

We arrived at Huerta Grande earlier than expected due to lack of traffic, so this gave us time to get to Barbate marshes.  Apparently there was a huge rainstorm last night (30th), so the water levels are very high everywhere.

Plenty of Meadow Pipits and Goldfinches in the grasses and thistles respectively.  A few Stonechats and Crested Larks about the track, while on the islands we found Audouin´s, Black-headed, Lesser Black-backed and Yellow-legged Gulls and just two Sandwich Terns.   As we got out of the car at least forty Stone Curlews rose up from the foreshore and headed to one of the islands, a few stragglers were noted but out of reach of our cameras.  A small flock of Ringed Plovers were logged as was a single Kentish Plover, lots of Little Egrets and Grey Herons about though.  Then a Redshank flew in to the front of the Stone Curlew island and was joined very quickly by another then a single Greenshank.  As we drove further down the track Spanish and House Sparrows were logged as were Grey Plovers.  In the trees here we located Chaffinches,Black Redstarts, White Wagtails, Robins and Linnets, while above us Lesser Kestrels and Crag Martins were noted.

We then drove down towards Barbate stopping at all the watery mud flats.  Cormorants were in good numbers as per usual, but not much else we then went down to the estuary by the road bridge, but no sign anywhere of the Red-breasted Merganser, that had been reported.

On the drive back a male Hen Harrier and a Common Buzzard put in and appearance.
Lots of Large Whites, Painted Ladies and a single Pale Clouded Yellow butterfly today.
Tomorrow its La Janda.

A chilly wind but warmed up later.

We headed for La Janda to search for a lifer - that being the Sociable Plover - that had apparently been at La Janda for a while now.  On the way logging Great Tit, Griffon Vultures, White Wagtails and House Sparrows.  As we approached Tahivilla village, Cattle Egrets, Spotless Starlings, Collared Doves, two Ravens and a Stonechat were noted.

As we entered the La Janda area three separate flocks of Lapwings rose off the fields and landed three fields away.  But not to be out done we did get good views of Spanish Sparrows and Corn Buntings, while on the harvested rice paddies we saw Spoonbills, Great White Egrets, White Storks and nearly a dozen Common Cranes.  On the plough we logged Linnets, Corn Buntings, Crested Larks and Stonechats, atop a pylon a Common Buzzard was seen and on the power lines two Lesser Kestrels were noted.

We started on the main track whereupon the Lapwings rose up again, it seemed to me that every time the Spotless Starling flock flew up it disturbed the Lapwings also, but I digress, after ten minutes of scanning the flocks we spotted the Sociable Plover - this is the juvenile/first winter bird not the adult, but it was still a good find for us.  On the right of the track a female Marsh Harrier appeared and put up even more Lapwings, but this time they included at least thirty Golden Plovers.  More Common Cranes were spotted here also, well over a hundred this time.  A Purple Swamphen was seen walking through the reeds and a Kingfisher passed us going downstream. 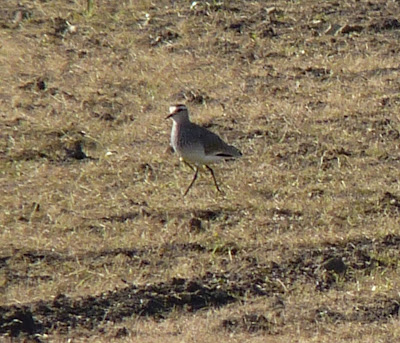 Moving on Green Sandpipers were seen in the rice paddies and a group of Glossy Ibis flew over.  In the bushes and grasses Chaffinches, Chiffchaffs, Zitting Cisticolas, Stonechats and Linnets were seen and a covey of Red-legged Partridges flew out also.  Common Kestrels were noted on the pylons as we turned right onto the track for the dam.  As we passed through "Egret Alley", a Little Owl was spotted on the  irrigation frame and Goldfinches flew off the water pools and a Blackcap started singing.  Further along close to the farm we logged two male and two female Pheasants, Jackdaws and a Sparrowhawk. We drove down to the bottom of this track seeing Great White Egrets, Black-winged Stilts, Buzzard, Ravens, Red Kite and a Blackbird.

Retracing our steps we headed for Barbate marshes, on the way four Egyptian Mongoose ran across the track to our front.

Barbate Marshes:
We have only come down here, to get our year ticks as we were here yesterday 31/12/2018.  But we did get and unexpected surprise, the Red-breasted Merganser was on an island among a group of Cormorants, not at the fishing village as we were informed.


Sounds like an incredible couple of days John and Jenny with lots of good sightings.  Now if only I can get out and about I might improve on my resent year total of 4 - yes four!


Check out the accompanying website at http://www.birdingaxarquia.weebly.com for the latest sightings, photographs and additional information
Posted by Bob Wright - The Axarquia Birder at 04:28