Following a request received through Birding Pal I had the pleasure and privilege of introducing a visiting American birder to the delights of three of my favourite birding sites in Andalucia.  A very early retired attorney from Baton Rouge,Louisiana, Tammeryn has spent much time in the States, and other countries, improving her birding skills and is here on a Spanish tour based on Madrid.  Perhaps a future visit to our region might introduce Tammeryn to the delights of the Donana National Park and the Odiel Marshes.  However, Tammeryn arrived a week ahead of schedule so that she could spend some time in Andalucia and, at the same time, take in some of the local flavour during her five night stay in Malaga.  The following itinerary was agreed:

Tuesday afternoon:  Collect in the city centre then off to Laguna Dulce and Fuente de Piedra for the afternoon.
Wednesday:  Drive down to Cadiz so that, after taking in the Roman remains at Bolonia, we could spend some time at Barbate
Thursday:  A full day in La Janda

Lots to see and lots of driving but by the time we returned to Malaga at 7pm on the Thursday I think we had seen all our target birds other than a Spanish Imperial Eagle whilst in La Janda.  Also, probably because the vast amount of water at Fuente de Piedra, we were unable to find an Avocet.  On the other hand we did find the Red-breasted Merganser, Lesser Kestrel, a first Barn Swallow of the year, Great White Egret and a range of raptors including Griffon Vulture, Osprey, Marsh and Hen Harrier, Black Kite, Black-shouldered Kite, Buzzard and Common Kestrel. 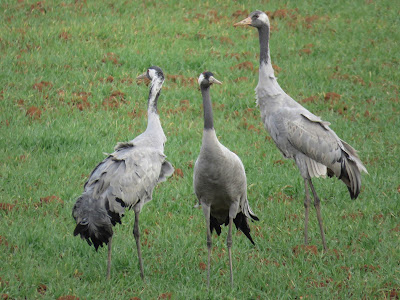 Other notable sightings included Golden Plover, scores of Glossy Ibis, a score of Spoonbill, Grey Plover, Kentish and Ringed Plover, Redshank along with a Stone Curlew and a number of Audouin's Gulls at Barbate and La Janda.  Laguna Dulce produced a flock of about 400 Cranes but thousands at La Janda.


Flamingos at Fuente de Piedra plus ducks including White-headed, Gadwall, Teal, Shoveler and Common Pochard but no doubt the highlight of the Laguna Dulce was getting up close to the flock of about 400 Cranes.

No doubt the Red-breasted Merganser and Grey Plover were probably the highlight at Barbate along with a number of Sandwich Tern at Los Lances beach.  On the other hand, in the late afternoon it was lovely to see the tightly-packed flock of about 50 Flamingos.  Then, of course, there was the search for the Bald Ibis.  Not seen at the marshes and a visit to Barca de Vejer revealed the nesting site but too early for the birds to be nesting.  So, as a final resort, a stop at the local golf course.  Despite looking everywhere and turning round in the far car park still no Bald Ibis.  The, as we set off for our overnight hotel, Tammeryn said, "Stop!  back up a little."  From the first tee we looked down the fairway to the and bunker and, sure enough, Tammeryn had seen the dark silhouette actually down in the bunker and we were able, at last, to get a distant view of a Bald Ibis.

Not content, Tammeryn took a walk don the adjacent path towards said bunker and came back with closer photographs.  It turned out that the Bad Ibis that was now out of the bunker was a second individual.. Also from her position she could see a hidden pool on which a number of Mallards were dabbling and up against the fence in the reeds a further nine Bald Ibis.  Do they roost in the reeds?


Having found one we then found very many Red-legged partridge plus a few Pheasants at La Janda which also produced the range of raptors referred to above plus Purple Swamphen and both Common and Green Sandpiper.  One of our memories of this visit will be taking to the water.  Having driven down the avenue towards the "smelly farm"which holds the Cattle Egret breeding site and crossed the bridge we were confronted by the lake across the track.  No way we could follow the dry stretch to the left as the steepness of the bank would surely have turned the car over.  Five minutes spent trying to fathom the depth of the water and we had seen no other vehicle since the single 4 x 4 that passed us upon first arriving on site.  Did this mean that we were lucky in that there were no other birders present or the others knew that the track was impassible?  Eventually we decided to turn round and take the long way round to Benalup and approach from the far side.  Half-way down the avenue I noticed that a car was approaching form behind so stopped, got out and spoke to the driver.  He and his passenger insisted that the road was passable; keep to the water and drive to the left, my usual tactic.

So, turn round again and approach the lake, engage second gear, wind up the windows, check that the tractor was still working in the field about 800 metres away and go for for it at a steady, consistent speed.  Great way to clean the underside, side panels and almost the roof!  But we made it which also meant that, having birded, we could return the same way!  And then of course, the return part of this drive produced Black Kites, Booted Eagle, a lovely male Hen Harrier, Black-shouldered Kite and so on. By the way, bare in mind that my car is NOT a 4 x 4!


Many of the species recorded will appear more than once as I list the species sen on individual days.

All in all, a final total of 80 species.  A most enjoyable two and a half days and I trust that Tammeryn was able to take some pleasant memories away with her.


Check out the accompanying website at http://www.birdingaxarquia.weebly.com for the latest sightings, photographs and additional information
Posted by Bob Wright - The Axarquia Birder at 10:25