The rains have come at last.  Absolutely through it down last night and again this morning - as forecast for the East Midlands.  It stopped mid-morning so took the car to the local garage o collect a morning paper then continued on to my local patch at Rutland Water to undertake some more experiments with the new camera and had an interesting ninety minutes before returning home and the la5test light rain.  Hopefully that's it for the present o that we get some dry weather from mid-week to help make the visit to the Annual Birdfair more enjoyable and also a day out at Gibraltar Point near Skegness before setting out on the long car journey back to Mezquitilla.

Both Wood Pigeon and Heron as I approached the North Arm and although the water appeared quiet there were good numbers of Greylag Geese and Mute Swan with a few Egyptian Geese and the usual local Cormorants.  (I would add that all birding this morning undertaken with just the trusty binoculars.) A handful of Great Crested Grebe and a score or more of Coot along with Mallard, Wigeon and Gadwall made up most of the smaller water birds along with at lest three Little Egret.  On the far bank a number of resting Black-headed Gulls.  Just the single Moorhen noted.  A few House Martin were feeding over the water as I left to make my way to the main Visitors Centre.

Driving along the connecting lane to Eggleton a couple of Crow in the first field and then at least twenty Jackdaw before seeing a couple of House Sparrow and Collared Dove as I passed through the village.

From the Visitors Centre only a few Coot to be seen but a Great White Egret on the far bank was a lovely sight.  In front of me a handful of Mallard and about the same number of Tufted Duck. Sand Martins from the nearby artificial nesting site were feeding over the water.  Only Black-headed Gulls to be seen from the Larus family.

A stop at the feeding centre where I intended to use the camera proved disastrous.  For some reason all the feeders here remain completely empty so the only bird that eventually explored the area was the Dunnock with at least three present.


On round the back of the water via Manton Bay passing a single Magpie and a large flock of Rooks to make a stop at the Lyndon Centre where I found far more activity.  Here the feeders had been kept topped up and were being regularly used by Blue and Great Tit with mainly youngsters, and more of the latter, taking advantage of the available food.  Ere long they were joined by both Goldfinch and Greenfinch along with the occasional Chaffinch and just beyond a riving charm of at least fifty Goldfinch, including very many juveniles, were feeding on the thistle seeds.  Just the one moulting male Blackbird but out on the water and nearby good-sized flocks of Canada Geese and Mute Swan plus both Greylag and Egyptian Geese.  Many Cormorants along with Coot, the occasional Moorhen and a small number of Mallard.


A couple of Osprey drifted past to add to the single bird seen from the main Visitors Centre but neither landed on the local nest.  I was informed that 27 Osprey had returned this year with eight successful pairings raising young and a further pair, almost certainly both young birds attempting their first breeding, which produced a single chick but was found dead on nest and very much under weight (800 rather than about 1300gms) when the nest was checked.


In addition to Black-headed there was also a small flock of Lesser Black-backed Gulls on the far bank and then, right in front of me through the glass, a rather lovely Common Whitethroat.  Soon after a Chiffchaff put in an appearance and a handful of Barn Swallows was seen over the water before the final, 38th, bird of my short visit was a Common Starling feeding on the feeders. 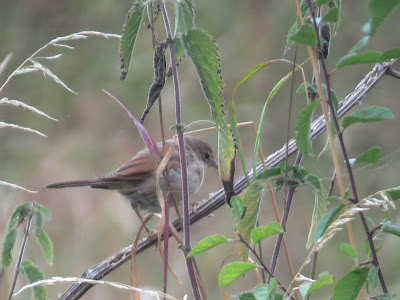 
Check out the accompanying website at http://www.birdingaxarquia.weebly.com for the latest sightings, photographs and additional information
Posted by Bob Wright - The Axarquia Birder at 10:04