First day of the month and barely into when up, breakfasted and away to arrive at my local birding patch back in the UK, Rutland Water, just before 7am. Kestrel still roosting atop a tree on the way and then a good-sized flock of Rooks approached my destination.  Naturally, welcome by the resident Wood Pigeons, Collared Doves, Jackdaws and Crows.  First stop was at the main feeding area in front of the Visitors Centre and they must all be very bust as all the hoppers seemed to be empty, not that that stopped no end of juvenile Blue and Great Tits searching for food along with a smaller number of adults.  Whist there I also recorded Chaffinch, Greenfinch and Goldfinch, Robin, Dunnock and Blackbird.

Walking towards Lagoons 4 and 3 I could not but not notice that all the marquees are now in place in readiness for Birdfair in a  couple of weeks' time.  I would imagine that the workforce managed to complete most, if not all, of the erections before our few heavy showers last week-end.  No doubt the coming week will see the placement of temporary toilets and other facilities.

A stop at Redshank Hide overlooking Lagoon 2 produced Coot, lots of Sand Martins, Great Crested Grebe, the first of very many Canada Geese, Teal and Mallard and Black-headed Gull.   On to Sandpiper Hide overlooking lagoon 4 and, at last, the sun to my right rather than right in front of me.  An Osprey was resting on the nesting platform but before I could get my cam,era out the bird was away.  However, withing a couple of minutes he was back complete with a fishy breakfast and this time I did have the new bridge camera at the ready.

Lots of resting Shelduck,  Mallard and Black-headed Gulls here along with eight Little Egrets and a Grey Heron.  Mute Swan numbers were good, and on other main waters, and certainly both the above gulls and Common Terns seem to have had a very successful breeding season with chicks now well grown.  Also present very many Greylag and Egyptian Geese.  Off to my far left the usual small number of Great Black-backed Gulls and a few Lapwing.  Moorhen and Little Grebe out in an appearance and then my first of two Snipe for the morning.

Then it was on to Lagoon 3 with my first stop at Shoveler Hide.  No Shovelers in sight but I did add Gadwall to the already seen Mallard and Teal.  Lots of Great Crested Grebe and duck numbers are beginning to increase.  On the shore a pair of both Common and Green Sandpiper.  Immediately below the hide at the water's edge a Reed Warbler was foraging for food.

A walk round the corner to the Smew Hide overlooking the back of Lagoon 2 revealed the many breeding Common Tern and there certainly seemed to be a plentiful supply of small fish for the rapidly growing youngsters.  Just the one male Common Pochard but more Teal and Gadwall and then the sight of a lone Great White Egret.


A brief stop at the Buzzard Hide to checkout the rear of lagoon 3 conformed large numbers of both Mallard and Tufted Duck with handfuls of both Canada and Greylag Geese dropping in.  However, having seen another Snipe on the far side of the water, I was rather delighted when the bird flew across and settle very close at hand to me left.  Only when taking a closer look at the quickly captured shots did I see the second, larger bird in the background.  So completely different in size but the length of bill on the smaller, darker bird would seem to confirm it as a Common Snipe whilst the lack of baring, clear white, would also suggest that the larger bird was also a Common Snipe.  Very strange indeed!  The smaller bird looked the correct size for Common Snipe so, if not an adult and youngster, what might the larger, paler bird be? 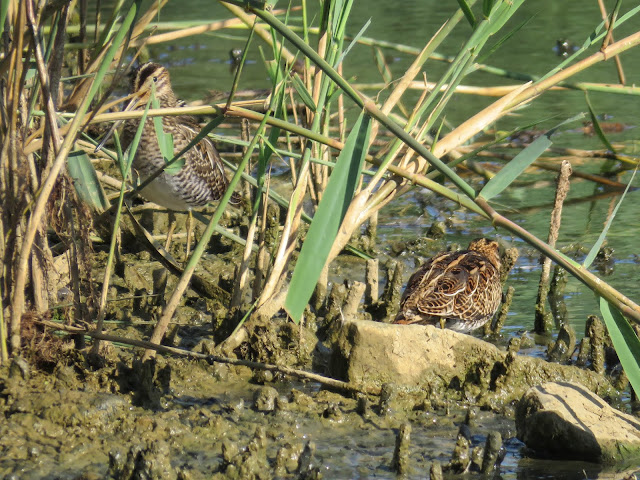 Walking back to the car I added Blackcap, Magpie and Barn Swallow then drove up to the North Arm, recording Common Starling at the corner farm on the way,where I picked u p scores of Cormorants along with more Little Egrets and four Curlew. A small group of birders (Twitchers?) were on the neighbouring field either watching or trying to find the juvenile Purple Heron that has been present for the past few days, but not for me.


My next and final stop was at the Lyndon Visitors Centre to see if the local Tree Sparrows were about; they were not.  But there was a regular feeding female Yellowhammer along with many Blue and Great Tits, mainly juveniles, along with Dunnock, Blackbird, Goldfinch, Greenfinch and Chaffinch.  A single Whitethroat was seen on two occasions.along with another Curlew in addition to many gulls, terns, Cormorants and ducks.  A visiting Glossy Ibis has been present in Manton Bay for almost a week but, as with the Purple Heron, I was not going to chase around for a "tick" when they are a common bird back in Spain.  Four "ground rats" below and a single "Tree Rat", aka Grey Squirrel, on the feeders before I finally headed for home having spent a most enjoyable and very quiet three hours, mainly completely on my own, and recorded 50 species.

Photographs take with the new Canon SX60 HS bridge camera.  Very light and pleased not to be carrying the EOS 7D and long lens but will I be happy with the end result in terms of quality?

Check out the accompanying website at http://www.birdingaxarquia.weebly.com for the latest sightings, photographs and additional information
Posted by Bob Wright - The Axarquia Birder at 07:18