A calm dry and warm day as I set out from home just after 8.30 and arrived at RSPB Frampton Marsh about an hour later passing a good-sized flock of Rooks along with Collared Dove, House Sparrow and Common Starling as I approached the entrance to the reserve where I was greeted by a number of Wood Pigeons in and above the trees.  Fortunately, there was a little broken cloud cover so making the temperature more bearable as certainly by the time I returned home mid-afternoon the skies had cleared and it was very hot and humid with the local temperature reaching 30C.


With the Visitors Centre yet to open I headed on down the lane to park at the end near the steps up to the embankment overlooking the marshes.  Lots of cattle about in the fields which will hold thousands of visiting geese come winter but already signs that birds are on the move.  Fifty plus Canada Geese resting near the only water and on the neighbouring "stream" feeding Black-tailed Godwits with some still in full breeding plumage.  A single Grey Plover, yet again in mainly summer plumage, was a delight to see and then a good number of Ruff including many juveniles before picking out the handful of Little Ringed Plovers and a couple of Ringed Plover.  A Moorhen wandered out from the vegetation at at the every end a family of Coot and looking up the stream to my right not only the first of the very many Mallards to be seen later on but also a couple of Oystercatchers.  A Reed Warbler or two were still singing and a small number of Lapwings were quickly added to the morning's sightings.


Before leaving this very productive area I watched most of the Canada Geese take flight to the wet, northern side of the road so revealing the single Egyptian Goose and a foraging Pied Wagtail.  A walk up the slope to the top produced a handful of Meadow Pipit but nothing seen on the marsh itself.  Looking back over the main reserve there were lots of Black-headed Gulls and no shortage of both Canada Geese and Mallards.  Also seen were the first Little Egrets and a couple of Grey Herons.  More extensive searching with the scope produced a first Snipe for the morning along with Common Sandpiper, Redshank, a single Curlew Sandpiper, Dunlin and resting Little Grebe.


Time to head back to the car park, passing both a Chaffinch and very small charm of Goldfinches on the way, and check the main pool from the Visitors Centre.  Hundreds of ducks to be see; mainly Mallard but also Teal and the occasional Shoveler.  At lest four Spoonbill sighted and the local Greylag Goose flock.  A single Barn Swallow flashed by the window and at that point I set off to explore the three main hides.

All was relatively quiet at the 360 Hide with nothing but dry land to the north but some water and mud to the south.  Studying this area I not only found a quartet of Avocet abut at least a dozen Snipe and maybe another ten Ruff, again mainly juveniles.  A pair of Shelduck were resting away to my left and then a small flock of Linnet came to explore the site in their search for food.


Next it was to the far west of the reserve to check the small area of water to the right of the East Hide where the recent Pectoral Sandpiper had been recorded.  I could see good numbers of birds as I approached and once inside added the Mute Swans, Little Egret, Grey Heron and more Avocets.  More Lapwings and a flock of Dunlin which also held a couple more Curlew Sandpiper - but no Pectoral sandpiper.  A few Shelduck and Teal rested on the bank of the furthest water and then a large "brown lump" hiding in the grass.  As it moved clear I could see it was a goose wearing a collar ring.  Eventually it was sufficiently exposed to get the scope on the preening bird which turned out to be a Pink-footed Goose; one had been reported the a few days previously but difficult to identify as it had remained hidden in the long grass.  Strange that the idea f the neck ring is to make it easier to identify - but which way up?  At first, along with a neighbouring birder whose attention I had drawn to the strange brown object, suggested the number might be S7M.. but seen when the bird had its head lowered to preen it could just have easily been 4 (or V) LS!  Meanwhile, a lone Little Ringed Plover was wandering the mud immediately in front of the hide and a couple of Common Terns were recorded.


Making my way back to the Visitors Centre I stopped to make use of the Reedbed Hide overlooking the back of the main pool.  Simply a mass of Mallard and there must have been approaching two thousand Black-tailed Godwits roosting as a , mainly, large single flock.  I had been told that a pair of Garganey were present here whilst in the previous hide and I certainly saw a pair of "strange" ducks. Certainly we found, there were at least eight birders in the hide all the time, a female Pochard and eclipse-plumaged Wigeon along with more Teal but this particular duck looked very much like a Mallard/ Domestic cross.  But, eventually, we found the pair of juvenile Garganey. On a nearby island with the resting group of mallards a single roosting Black-tailed Godwit looked strangely out of place but not so the single Herring Gull or nearby flock of Black-headed Gulls.


Eventually back to the Visitors Centre to report my sighting and a drive to my original parking place before making my departure where I, too, found the previously sighted Wood Sandpiper along with the still-feeding Black-tailed Godwits and Ruff.  With 50 species recorded during my stay it had proved a most enjoyable visit and I expect to return in a couple of months when next back in Stamford. 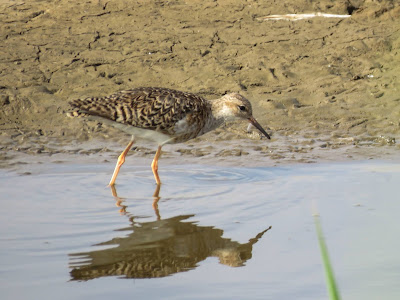 Check out the accompanying website at http://www.birdingaxarquia.weebly.com for the latest sightings, photographs and additional information
Posted by Bob Wright - The Axarquia Birder at 08:44