With rain forecast for the intended visit day, Thursday, we made the trip a day earlier.  In the event my Belgian friend, Marieke and I had a fabulous day out and, yes, it did rain heavily on the Thursday morning.  (Looks like we might be in for some damp underfoot weather when we visit the annual Birdfair at Rutland Water on Friday!)

Less than two hours away from Stamford (why don't I make this trip more often?) we were greeted by a single Magpie and the first of many migrating Barn Swallows overhead. The outward journey had already produced both Rook and Common Starling so we were very much looking forward to catching up with the reported visiting Spotted Crake at the the reserve.  But first a welcome cup of coffee and a shared cake of very rich and gorgeous taste!  The short walk down past the haven to the Wash Viewpoint produced Black-headed Gulls and the first Redshank of the morning along with a hovering Kestrel.  Immediately above the small raptor was a single Common Swift.  Both Little Egret and Wood Pigeon were recorded along with at least thirty Common Seals Phoca vitulina resting on the top of a narrow drain as the tide made its way out and not to return for another four hours.  In the far distance we could see a steady passage of small waders along the shore of the Wash.

Back to the car park to collect telescope and camera and then head off along South Marsh Road towards the dunes and beach.    A stop near Bean's Hole to look at the activity in the small trees produced a couple of lovely Willow Warblers before resting at the view point overlooking the Shorebird Sanctuary.  From this vantage point we found a trio of Oystercatchers until panning left (north) which revealed that there must have been well in excess of a thousand of these delightful pied waders but nothing in comparison with the 5000 plus Knot that continually moved south along the coast.  On the water's edge we also recorded Sanderling and Turnstone and then the first of the  Sandwich quickly followed by Little Terns.  Also on the beach, so tempting to jump in for a paddle, both a single Cormorant and Curlew and a few Herring Gulls.  But we had not yet finished for reaching the end of our walk before heading inland up Mill Hill we also came across a small flock of about fifty plus Black-tailed Godwit.

Passing a number of Goldfinch, mainly juveniles, and some Linnets we arrived at the hide overlooking The Mere.  Now we eagerly expected/hoped to get a sight of the visiting Spotted Crake.  Two birders already in the hide who reported that the bird had put in an appearance less than ten minutes previous and that they had managed to get photographs.  And so we settled down to wait whilst, at the same time, noting what else was on the water.  A pair of Mute Swans with three well-grown cygnets, Little Grebe also with three youngsters, both Coot and Moorhen with well-grown young and, of course, a couple of Mallards and even a female Teal.  A Carrion Crow passed over at the back but still no sign of a crake after forty minutes plus and, getting on towards 2.30, we were now both a little on the hungry side. 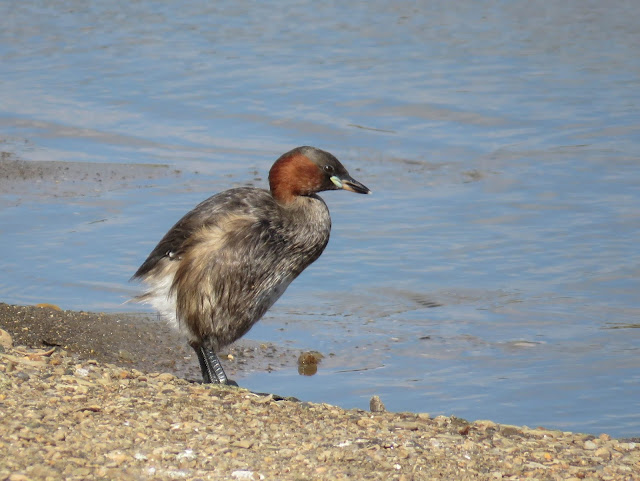 A Snipe took up residence right in front of the hide giving excellent views.


Time to move on and take the inland track on the east side of West Dunes back to the main car park recording both Jackdaw and another Magpie on the way.   A quick comfort break then the short drive up to the Beach Car Park from where we collected everything necessary before heading off to the northern hide overlooking Tennyson's Sands and the large, freshwater pool in front. Here we enjoyed our picnic lunch whilst checking out the many birds, mainly a mix of Black-headed Gulls and Avocet but also Cormorant, more Snipe, Black-tailed Godwit, Teal, Mallard and a handful of Lapwing.


Then the good and the bad news!  Looking way south we could see a mixture of birds on the southern water so the promise of more to come when we visited plus the bonus of, whilst looking at the reed edge, a Water Rail wandered out for a short look around before disappearing from whence it had come.  Bad news?  We were joined in the hide by a couple who we had previously met in the Mere Hide and informed that within ten minutes of our departure the Spotted Crake had put in a very short appearance, measured in seconds, but very clear as only about three metres distant.  Isn't that just the way of birding!

The visit to the hide overlooking water of Jackson's Marsh was very profitable.  Hardly had we arrived and seen at least a quartet of Snipe than we added a Greenshank along with both Canada and Greylag Geese.  Lots of Avocets and Black-headed Gulls and a few more Lapwing and Teal.  A passing Marsh Harrier put everything up and when all had settled back down again we could see more Black-tailed Godwit along with a handful of Dunlin and a Common Sandpiper.  Not only were we able to also find both Shelduck and Tufted Duck but also a Yellow-legged Gull.  A lone Pied Wagtail worked the beach below us as a Meadow Pipit flew over and, at the northern end of the water, we also identified a trio of Common Tern.

Time I think to call it a day given that we still had a two-hour return journey so back to the car, passing a male Chaffinch on the way, to lose everything apart form binoculars and camera and one last check of The Mere for that elusive Spotted Crake.  It was not be our day but we did have a passing Sand Martin and on returning to the car added Collared Dove.  Then it was the drive back along the point adding both Blackbird and House Sparrow to give a final tally of 53 species.  So ended a very enjoyable day at a truly beautiful site.


Check out the accompanying website at http://www.birdingaxarquia.weebly.com for the latest sightings, photographs and additional information
Posted by Bob Wright - The Axarquia Birder at 10:51