Our forecasted rain seemed to come early so once domestics and ABS business out of the way, I took myself off to Fuente de Piedra for the morning. On arriving I was looking forward to, hopefully, watching Black Terns and, maybe, even White-winged Black Terns, feeding over the "pond" on the left of the road approaching the Visitors Centre.  Fat chance; no pond and no water under the boardwalk nevermind the scrape which was now a veritable dust bowl.  What to do, what to do?

In the hoe that there might be something loitering about in the reeds seen from the boardwalk, and influenced by the coach load of five-year olds that arrived at the same time, I set off with scope and camera left in car.  Apart for the resident Rock Doves and Spotless Starlings my first sightings were of Barn Swallows feeding over the empty pools and then a air of Jackdaws making their way back to the Visitors centre.  The only bird found from the boardwalk was a distant Woodchat Shrike.

A walk around the edge of the scrape and up to the Mirador produced nothing other than a male Sardinian Warbler.  From the Mirador I could see hundreds of Flamingos lined up in what appeared to be no more than a damp patch; one continuous long line.  Jackdaws and House Sparrows behind me as I made my way to the Laguneta at the back but, strangely, noticed that the small pool on the right was quite full and included a couple of Coots, one with two and the other with three chicks (Cootlets?).

But what a treat the Laguneta was with plenty of water and even more birds.  Maybe as many as fifty Flamingos and a good flock of resting Black-headed Gulls. The to the ducks, especially having seen a handful of Red-crested Pochards fly over me as I approached.  More Red-crested and also a number of Common Pochard plus the occasional Mallard.  A single Gadwall paddle left and far off to the right was a male Shoveler.  Nut on the opposite side a pair of very active White-headed Ducks making their intentions well-know to the accompanying females.  maybe just worn out as there was another male looking absolutely worn out and recovering on the near bank!

Also on the water a pair or two of Little Grebes along with Moorhen and the island contained many Avocet.  Whilst the Nightingales sung heatedly around me and a handful of Linnets and House Sparrows fed on the ground to the front of the hide, the White Stork was sitting very tight on her nest atop the tall chimney so, presumably, at the incubation stage. However, it was not the Barn Swallows and House Martins feeding over the water that held my attention but, rather, the pair of Black Terns that were occasionally joined by the summering Gull-billed Terns.  What a lovely sight. 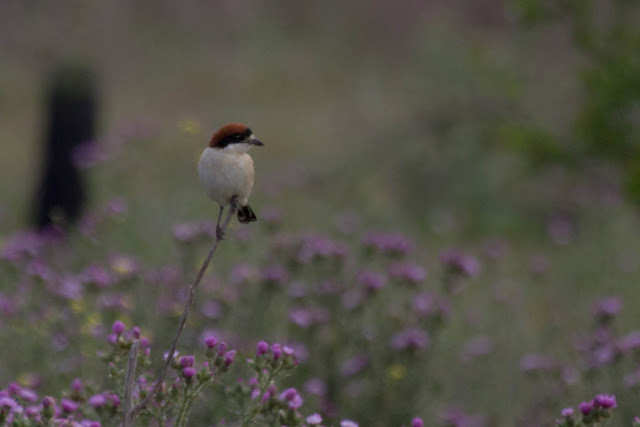 With the youngsters now about to join me it was time to depart and head off back home noting a single Black-winged Stilt of the "hidden" pool and a further Woodchat Shrike and a male Stonechat just as I approached the main road.  The home ward journey aso produced Hoopoe, Blackbird and Collared Dove as I drove through Mollina.


Check out the accompanying website at http://www.birdingaxarquia.weebly.com for the latest sightings, photographs and additional information.
Posted by Bob Wright - The Axarquia Birder at 12:55