A sunny day in the country

Well,it was until mid to late-afternoon when it clouded over, became almost overcast but still warm, and then a few drops of rain followed by a very light shower as I drove on home from Alhama de Granada.  A lovely day, though, with over forty species at three specific sites; the Rio Cuevas below Solana produced the first target bird, a Golden Oriole, the second a little further on at the Montes de Malaga did not produce either Hawfinch or Firecrest but a new species for the year by way a Wren and then, finally, on over to the Upper Cacin Valley where I found Rollers but not a Great Spotted Cuckoo.  But I did have close sighting of a 15 Black-bellied Sandgrouse.

Parked up in the dry river bed at the ford on the Rio Cuevas I immediately had both Blackbird and Barn Swallow and then a family of Goldfinch drinking in a small area of free running water.  A pair of Red-rumped Swallows flew over and whilst there were both Collared Dove and House Sparrow about it was the first of the male Chaffinches that caught my attention.  Next the Serins were down to drink along with both a Sardinian Warbler and a Nightingale.  Even a female Blackcap made use of this small section of clean, running water.  The Thekla Lark was, perhaps, expected but not the sudden sight of a Sparrowhawk above the trees at the top of the slope.

A short walk below the ford produced the fist calling Golden Oriole and it was certainly being challenged in terms of excitement by the male Cuckoo calling loudly from close by.  A handful of bee-eaters were about and resting in nearby trees along with a single Common Kestrel. But the Golden Orioles continued to serenade me, even if they are areal so-and-so to actually find when resting in the Eucalyptus trees, and were almost contemptuous of the competition put up by the local Hoopoes.


On over to the Montes de Malaga by way of Colmenar and park near the little museum so I could take a walk through the valley.  Spotless Starling and Chaffinch at the start and then a lovely Short-toed Eagle overhead.  The calling Wren caught my attention and then put in a fleeting appearance by way of confirmation.  Great Tit, Blue Tit and Blackbird noted as I walked back and a large gathering of House Martins picking up mud for their house building requirements.

Collared Doves as I entered the local track to take me straight to the almond orchards in the Upper Cacin Valley in search of both Roller and Great Spotted Cuckoo.  No sign of the latter and I was rather surprised to find the Rollers with a pair in the old tree that had been previously used, especially having been told that the tree had been taken over by Little Owls.  Both House Martins and Barn Swallows in the air as I entered the site and then my first Crested Lark, so both Thekla and Crested seen today.  A Common Kestrel in the air and then a pair of Magpies as I continued to work my way in and out of the trees. 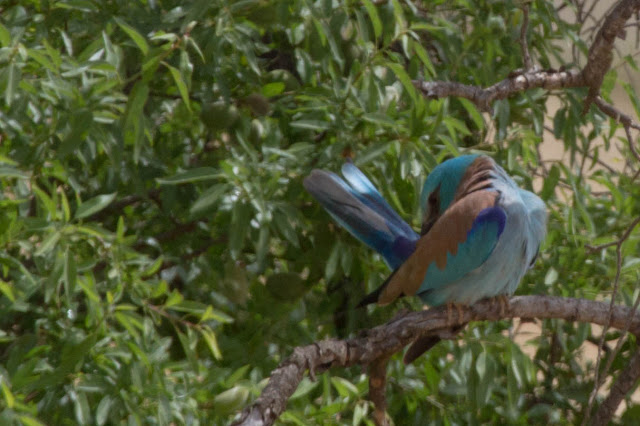 One last sorte to the far end of the site and I was suddenly aware of a shape on the ground.  No sooner had I stopped than ten Black-bellied Sandgrouse took to the air from the neighbouring ride.  But my bird remained sitting whilst I happily snapped away and  he/she and a partner, that I had not previously seen, simply stood up and walked away like a pair of Red-legged Partridges.  A very pleased smiled on my face as I made my way back to the road via the old ruin, but no Little Owl present, and I also recorded Bee-eaters, an Iberian Grey Shrike, Crested Lark, Corn Bunting and Stonechat.  Driving down the country lane to make my way home I also picked up more Chaffinches and a couple of Woodpigeon and then, passing a much-depleted Cacin reservoir, noted the Mallards, Common Pochards, Moorhen and Coot.

Finally, driving through the "Magpie Woods" to the north of Ventas de Zafarrya I had an Azure-winged Magpie cross the road in front of me to be quickly followed by a couple of Jays.  Not a bad way to end the day even if the sun had by now disappeared. 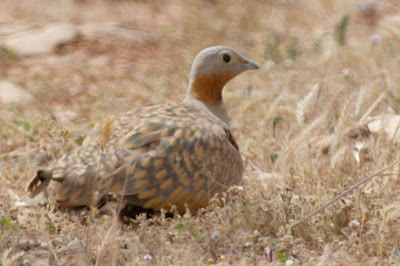 Check out the accompanying website at http://www.birdingaxarquia.weebly.com for the latest sightings, photographs and additional information.
Posted by Bob Wright - The Axarquia Birder at 13:14