My Belgian friend, Marieke Berkvens, arrived late Sunday evenings for two nights before going on down to Tarifa for the rest of the week.  The plan was, therefore, to visit the Guadalhorce today and then meet up next Sunday to undertake the "Osuna Triangle", which should guarantee the sight of Rollers.  However, reading a late email from John and Jenny Wainwright before going to bed I saw that they had recorded a Red-footed Falcon, so come the morning a change to the original plan for today.


Instead of the Guadalhorce we set out to visit four sites just over the border in Granada province.  First call was to the Arroyo Marin to see if it had recovered form the recent damaging fire and hopefully pick up both Great Spotted Woodpecker and Hawfinch, then on to the lower quarry at the Sierra Loja for the Eagle Owl.  Next stop an introduction to the Huetor Tajar site then on to the Upper Cacin Valley for, hopefully, Great Spotted Cuckoo, Roller and a few Black-bellied Sandgrouse.  What can I say?  No Hawfinch or Great Spotted Cuckoo, no Eagle Owl and certainly no target birds on the "sandgrouse site" but the very last bird seen was a Turtle Dove, our first of the year, so not all bad news.

Passing the brand-spanking new and still unoccupied prison in all its pristine glory before arriving at the Arroyo Marin we saw only three gaol-birds; a Spotless Starling and Blackbird escaping over the high fence whilst the Hoopoe seemed more intent on breaking in by the same route!  On arrival at the main track into the arroyo we took a side track and parked up before walking to the little bridge over the stream to an accompaniment of scores of songsters.  Just like a continuous dawn chorus.  Lots of Nightingales singing along with Wren, Chaffinch and Blackcap.  A Blackbird then a Sardinian Warbler crossed the track and on the far side a couple of Azure-winged Magpies and a Jay flying out of the olive grove.  Then the local Cetti's Warblers let forth with their noisy siong.  A male Golden Oriole passed over head and on our return walk to the car we saw both male and female take off from a full-leafed tree to head overhead back up the stream.  Both Rock and Collared Dove were seen and overhead a couple of Crag Martins.  Next up were Goldfinches and a Great Tit with a Stonechat posing conveniently in a tree top.  Progress down the main track in the car came to an abrupt halt when we reached the chain across the road just before the turn off to the old ruin.  We could still hear lots of Golden Orioles and also saw both a number of Woodpigeons and a single male Blue rock Thrush.

A brief stop to visit the main, lower, quarry on the track up to the Sierra Loja behind the motorway service station duly provided both Black Wheatear and our first Woodchat Shrikes of the day.  Barn Swallows were flying around along with Crag Martins in the quarry itself.  No sign of the Eagle owl at its traditional nest site but we did add both Serin and Linnet plus calling Red-legged Partridges before returning to the service station for a welcome cup of coffee and a warm reception from the breeding House Martins and local House Sparrows.

Our this stop was to explore the path alongside the growing field at the far boundary of the small town of Huetor Tajar.  Relatively quiet at this time of the year but there were a number of both Spotless Starlings and a mixed flock of House and Tree Sparrows along with a number of Crested Larks.  After seeing a female Blue-headed Wagtail we spent a few minutes watching the (mainly) House Martins and Barn Swallows gathering mud from a large puddle created by the irrigation system.  A short circuit round the now dry Cacin river itself saw us find both Common Sandpiper and Little Ringed Plover at the edge of the large "puddle" where normally there is a ford across the river.  Naturally, loads of House Sparrows along with Spotless Starlings all making use of this scarce water supply for both drinking and washing.

Then it was time to stop for lunch and greeted by a pair of Greenfinches before realising our big mistake; today is a public holiday so no menu del dia available!  Nevertheless, a lovely meal and so on to our final stop of the day in the Upper Cacin Valley to see if we could find both Great Spotted Cuckoo and Roller.  As you now know, we were to be completely unlucky.  But on the way we did find both Woodchat and Iberian Grey Shrike along with our first Bee-eaters.  A Magpie presented itself and working our way through the almond orchards we even had a few more Azure-winged Magpies.  No Little Owl on the old ruin but a pair of Lesser Kestrels were working the fields and appeared to be feeding on the wing as they picked up flying insects and the along came a pair of Common Kestrels to add to the fun.  Perhaps they had been drawn to the site by following the feeding Common Swifts.  Working our way towards the far end and start of the return journey home we found our last bird of the day sitting atop an almond tree; our very first Turtle Dove of the year.  Now that's a lovely way to end a long and rewarding day. 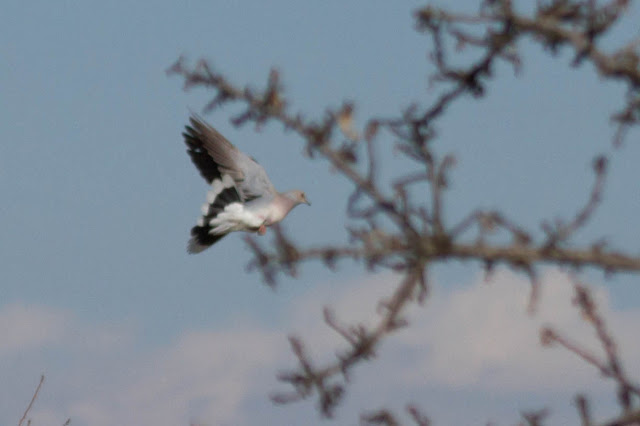