Zapata and the mountain trail above El Burgo.  Sounds like a trip into bandit country - and once would have been!  Up very early to meet up with Barbara and Derek Etherton plus Micky Smith to be down at Zapata before daybreak to have a reasonable chance of seeing the newly-returned Red-necked Nightjars.  However, it was the very many Nightingales that we heard first on arrival and after the briefest glimpse of a Red-necked Nightjar then a few circuits did eventually bring us to a stop where we could hear a very close individual.  No sooner heard than the bird flew up in front of the car and disappeared into the darkness.  Wonderful!

With light breaking and a walk towards the river we could make out Black-winged Stilts and overhead the remarkable sight of a White Stork which then landed to rest in the water itself.  On the far bank Moorhens, Mallards and Little Ringed Plovers whilst, overhead incoming Night Herons and Cattle Egrets. With the improving light we then had our first raptor as an Osprey passed overhead making its way upstream  Around us Greenfinch and Serins along with Blackbirds and Collared Doves.  The first Barn Swallows put in an appearance and the riverside revealed both Common and Green Sandpipers.  A pair of Gadwall appeared out of nowhere on the water.

Around us we continued to listen to the numerous Nightingales and then a Cetti's Warbler joined in the morning chorus.  Yellow-legged Gulls, Jackdaws, Common Swift and Red-rumped Swallows were added to the overhead birds as we moved on down to the reed-bed.  Here we added Reed Warbler, Goldfinch, Sardinian Warbler and Blackcap along with a Zitting Cisticola and a pair of Grey Heron.

A short break for breakfast and then we made our way inland through Ardales and up to the long mountain track above El Burgos.  The most enjoyable aspect of this track, apart from the fabulous views, was the lack of company.  After a couple of hours a single car passed us and we were not to see our second and final vehicle until we left the site another two and a half hours later.  No shortage of Corn Buntings and especially Chaffinches as made our way having already added Blue Tits and Great Tit along with Rock Dove on the way.  The woods produced the anticipated Blackcap, Coal Tit and Short-toed Treecreper, a quartet of Jays and a handful of Mistle Thrush.  Further on a couple of Hoopoes crossed the track in an open space and we also found Wood Lark and a Cirl Bunting.

One of the delights was to also find a rising Sky Lark and then a Sparrowhawk circling high over the trees followed by a passing flock of about fifty Bee-eaters.  Close by we also encountered Stonechat, Thekla lark and Linnet.  Eating our picnic lunches and looking towards the steep cliffs we were able to add Chough and Crag Martin along with a few soaring Griffon Vultures.  Not so much the Blue Rock Thrush that Derek found with the scope but the sudden sound of what sounded like some form of car or electrical alarm.  Not our mobiles and the proverbial penny dropped as first Micky, then Derek and I realised that we listening to a calling Scops Owl, a real revelation.  And so on to the end of the track picking up a trio of Alpine Swifts above their breeding cave and both Woodchat Shrike and Woodpigeon along the track itself.  A final raptor on the mountain was a high Bonelli's Eagle.

Making our way back to the cars parked near Zapata we called in at the Rio Grande where we found plenty of Black-winged Stilts and Little Ringed Plovers along with Moorhen and Mallard and, finally, our first Little Egret of the day.  A Buzzard circled above in the distance and the journey home produced at least three Kestrels on the electricity pylons alongside the main road.  A great day's birding with five new species of the year for me in wonderful company.  But I certainly needed the sleep at the end of the day! 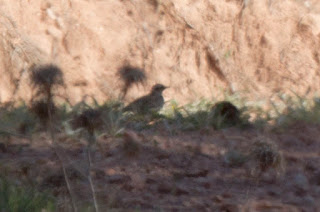 Check out the accompanying website at http://www.birdingaxarquia.weebly.com for the latest sightings, photographs and additional information.
Posted by Bob Wright - The Axarquia Birder at 09:41