Up early and out of the house by 7 to enable me to arrive at the first causeway at Las Norias, surrounded by those very fashionable plastic greenhouse slums, by just after 8.30.  My first impression was that there was very little about, mainly a few Coots, Great Crested Grebes and Red-crested Pochards.  The odd Moorhen put in an appearance and I soon found a couple of foraging Reed Warblers at the water's edge.  Having noted the pair of Little Grebes I then scoped


along the reeds at the water's edge and was absolutely thrilled to see a Little Bittern appear to walk out of the water and stand posed on the red edge giving super views.  Unfortunately when I eventually decide to retrieve the camera from the car the bird had advanced into the reed out of sight.  No point looking up the water towards the top end as the sun was now up and very low making visibility almost impossible so off to the plastic factory and park up to check the rest of the water.

This end was even quieter.  Great Crested Grebes on the mucky end pool and a lonely Grey Heron.  The Red-crested Pochards were further way and when looked at from the bottom road I even found a pair of Gadwall.  meanwhile, away from the water, the usual assortment of Blackbird, Collared Dove and Spotless Starling but nothing exciting.  But then a Night Heron flew over so not all bad news.

So of to Roquetas de Mar with the first stop at the small pools on the track towards the lighthouse.  A good number of Black-winged Stilts and as I rounded the corner I was just in time to see a Squacco Heron before it disappeared down the other side of the bank.  On the other hand, the bird did reveal the Purple Swamphen that was wandering around the reeds.  Again, not a lot of birds present but I did record Little Egret and a few Common Pochard in addition to more Red-crested Pochards.  A distant Marsh Harrier was not unexpected and then, parking at the far end to check out the island, a lovely mix of birds to be seen.  Unfortunately, presumably due to lack of birders, the reeds had grown quite tall and were beginning to thicken so very difficult to get clear views but sufficient to reveal another Squacco Heron and a Spoonbill resting alongside a handful of Red-crested Pochards.  It was also here that the Cattle Egrets had gathered to feed.

At the very back of the water I was able to pick out a trio of Black-necked Grebes in what looked like full summer plumage and the occasional Moorhen.  A mixture of Yellow-legged and Black-headed Gulls were also present.

All done and time to drive round to old salinas with a first stop at the picnic pool where I found dozens of Mallards, mainly resting on the bank, along with a few Common Pochard and a single, male White-headed Duck.  Strange bird this; he wanted to join the Mallards to see if any food was going begging but swam in disguise with his head tucked into his back.  Quite weird to watch reverse mode.  So, with a pair of Crested Larks feeding on the tack I set off to check out the main pools and, best of all, not another person in sight; the area was entirely mine!

Lots of Black-winged Stilts but then, at last, the Little Ringed and Kentish Plovers put in an appearance.  A distant view of a Collared Pratincole which then took to the air was rather lucky but fifteen minutes later I was to realise that these were nesting birds with at least a score in the air at any one time.  Lovely birds to watch as they fly around like either under-sized terns or overgrown swallows. 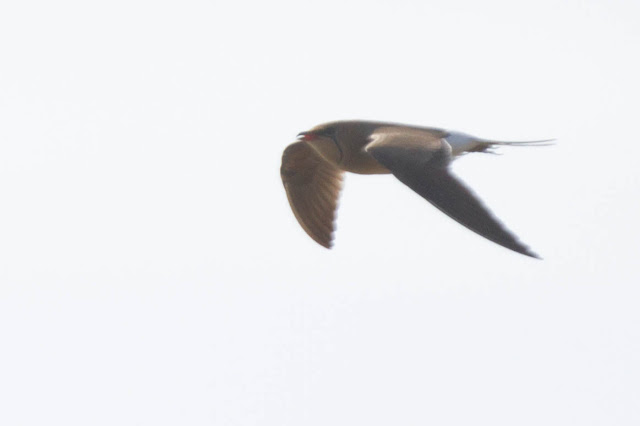 A handful of Dunlin was found and then a small flock of what looked like Golden Plovers.  Certainly not Grey Plovers yet they had many similarities of Dotterel so record shots take to try and solve the mystery on the computer when I returned home.   (Watch this space, as they say.) A long way down the salinas and checking out the side track I picked up a number of (Iberian) Yellow Wagtails and finally found the main flock of, presumably, non-breeding Flamingos.  Mainly Black-headed Gulls here but closer examination did reveal a pair of Slender-billed Gulls. 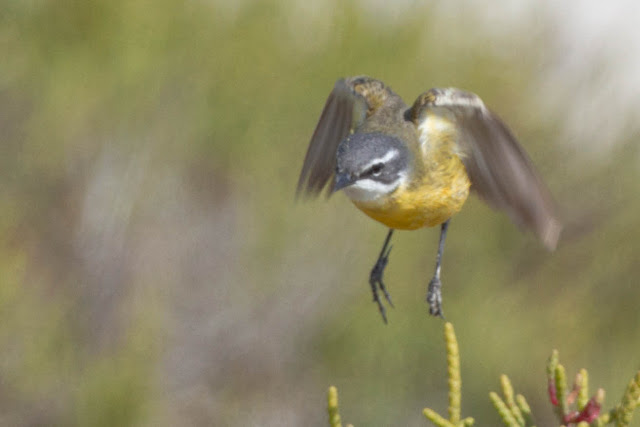 About a score of Avocets present but they, like the Flamingos, were a long way down the track.  And also a single Common Redshank working a pool.


Making my way back via Las Norias on the homeward journey, I picked up both a Magpie and a Stonechat on the wires before heading back through the greenhouse from Roquetas de Mar.  It was also here that I saw my first and only Barn Swallow of the day.  Nothing to add at Las Norias other than a single Cormorant which had arrived for its lunch-time rest.

Check out the accompanying website at http://www.birdingaxarquia.weebly.com for the latest sightings, photographs and additional information.
Posted by Bob Wright - The Axarquia Birder at 04:10