Osuna for the Great Bustards

First birding trip of 2017 and need to make sure that the new eye gets as much practise as possible - albeit Jacinto might now tell me that it should be rested!!  Collecting my visiting Dutch friend, Lisette Heikoop from neighbouring Caleta we drove over to Osuna where we met up with a further six members of the ABS,  Then, after a suitable coffee to keep us initially sustained, we joined forces to travel in just the two cars on the anti-clockwise circuit of the "Osuna triangle" in search of our two main target birds, the Great and Little Bustards.  A great birding day was to follow in great, cheerful company and, I am sure, enjoyed by all.

No sooner had we driven round to the country lane behind the petrol station than we saw our first Red-legged Partridge.  For the rest of the day it seemed that there was not one single kilometre that we did not see at least three, if not five or six, of these tubby little birds either running the fields or posing before undertaking the former.  The Red-legged Partridges seemed to be everywhere and we must have encountered approaching an hundred during the course of the day.  Either there is no shooting take place at the moment or the area is going to be awash with wildfowl next autumn!!!!

Also in this arable area either side of the now defunct new high speed rail track we were encounter numerous "little brown jobs", mainly Linnets and Spanish Sparrows but also Crested Larks, Stonechats , Zitting Cisicola, Sardinian Warbler, Chiffchaff and Corn Buntings.  Indeed, so many Linnets and Spanish Sparrows never mind flocks they looked more like swarms.  There were a number of House Sparrows and Chaffinches and Sky Larks were also recorded.  In terms of raptors it was mainly Buzzards but also a good number of Red Kite sightings along with a few Kestrels and the occasional Marsh Harrier.  In addition to the raptors, there were regular sightings of the occasional Raven.

Approaching the first of the high bridges over the empty rail track a flock of eight large birds flew past low to our right.  Not the suggested Cranes but Great Bustards.  Stopping the cars we found that not had the birds landed in a green field but with the use of bins and scopes concurred that there was a total of 24 of these large birds, all strutting their stuff but not yet in full breeding display.  Not only the Great Bustards but a number of Iberian Grey Shrikes were also noted and, indeed, during the rest of the day.  On leaving the site we came across a single Little Grebe resting/feeding in a small water deposit!

Then it was onto the abandoned track to drive down to the low viaduct over the pools and much to our surprise there was actually a little water still to be seen.  To the left a total of 8 Snipe along with Wood Sandpiper, Green Sandpiper and a rapidly disappearing Common Sandpiper plus Ringed Plover whilst on the banks in front of us leading up to the farm a total over 50 White Stork.  But best of all, on the drying ponds below us to the right we found both Meadow and Water Pipit along with White Wagtail and, possibly, the sighting of the day a pair of Black-bellied Sandgrouse giving excellent views to all.  Shame that we all birders concentrating on what we were looking at rather than one of us reach for the camera!  Above regular passages of large flocks of Lapwing and, on closer inspection, a good number of Golden Plover mixed in with their company.  Gulls seemed to be exclusively of the Lesser Black-backed variety.  Just before reversing to take the track back to an open gate we looked at the viaduct railings where we had a pair of Rock Doves on the left and a preening Red Kite immediately opposite.


So it was on to La Lantejuela for a quick snack and on the way we picked up our first Black-winged Kite thanks to Lisettes's sharp eyes.  She also found the second individual on the way back to our meeting place and in total managed to record three individuals.  Black Redstart, Greenfinch, Serin, Goldfinch and many more Linnets were also seen.  At the town we managed to get a restricted sight of the lake from the road where we added Mallard, Shoveler, Pochard, Black-necked Grebe plus a few Moorhens.

After tapas and a drink our next stop was the surprisingly wet Laguna Osuna where, in addition to a single Back-winged Stilt we had large flocks of Lapwing and Shoveler along with at least half-a-dozen resting Stone Curlew.  Both another Green and Common Sandpiper and lovely to see the over-flying Red Kites.  Working our way back to Osuna along a farm road we managed to find more Buzzards, Red Kite and a lovely Black-winged Kite along with Thekla Lark and a small flock of Calandra Larks.  A closer look at the many gathering Spotless Starlings even revealed a pair of Northern (or Common) Starlings plus a single Magpie.  Then at least ten Hoopoes on and around the electricity wires and poles.  Having commented that the Little Owl was not present in its usual site we were informed that Derek's car had seen an individual early in the day not long after setting off but then they did not see the Green Woodpecker that took off from the top of an electricity pylon. Also in this area we added Robin and Blue Tit to add to the Great Tit seen mid-morning.

So back to base and after such an enjoyable day, lots of good birding and banter and a total of about 60 species we celebrated with a quiet drink before setting off home in our various cars.  But the day had not ended as, looking u, a pair of Cattle Egrets passed over heading, no doubt, for their evening roost. 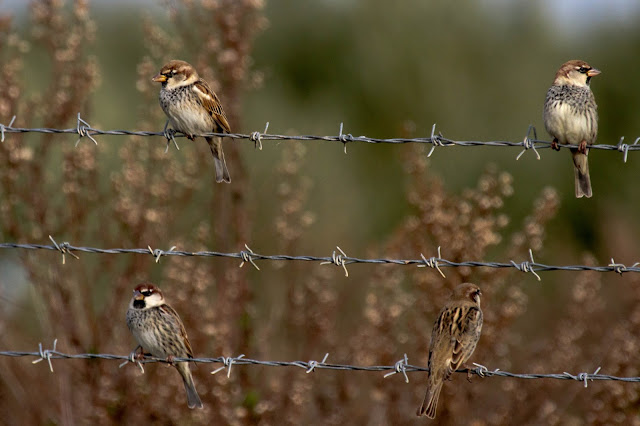 
Check out the accompanying website at http://www.birdingaxarquia.weebly.com for the latest sightings, photographs and additional information.
Posted by Bob Wright - The Axarquia Birder at 10:21