After yesterday's visit to my eye specialist friend it would appear that the healing process following the cataract operation four weeks ago, despite some minor complications, is going well and the message is to go out and use the eye, get some practise, make the little orb do some work.  So I did.  Took off for the coast west of Malaga to try and find the two winter visitors that are presently, as seen in the past few days, with us but may not be next winter.

Late morning in blazing sunshine and not a cloud in the sky I was at the hide overlooking the beach/sea below the Fuengirola lighthouse.  However, with a very stiff on-shore breeze the sea was rough and virtually no beach as a result of the accumulated rubbish following last month's storms and most of the feed rocks covered.  Not a single wader in sight so did not find the elusive Purple Sandpiper; one twitch down.  On the other hand, there was a mixed flock of Lesser Black-backed and Yellow-legged Gulls resting on the sea and to my left a pair of Audouin's Gull resting along with a single Cormorant on a larger rocky isle.  Behind me a small number of Golfinches and Serins were feeding on grass seeds.

Next further along the coast to the golf course that was reported to be hosting a winter-plumage female Long-tailed Duck.  Drove up the road looking down at two small lakes, more like large ponds, and stopped at the upper hand where there was some convenient parking.  Moorhens, Little Grebe and a passing Cattle Egret but no ducks.   I watched the White Wagtail messing about in front of m and then drove back down the hill, noticing a number of Mallards on the lower lake. Having found a nearby piece of waste ground to park the car I than walked back up the buggy track alongside the drive and lake.  Coots in the water and both House Sparrows and Collared Doves on the opposite bank and then, immediately in front of me, about a dozen Mallard on the track being fed bread by a couple of golfers.  Just my luck, I thought, only Mallards.  But as I drew nearer and the golfers moved on, I noticed that the Long-tailed Duck was immediately to the side of me, not five metres away very close to the bank.  The duck might be on winter holidays but obviously not as brave, or stupid, as his Mallard cousins.  But there the bird was, paddling round and round and not at all bothered by my presence as I snapped away.  Wonderful sight with the sun on the bird; second twitch a success. 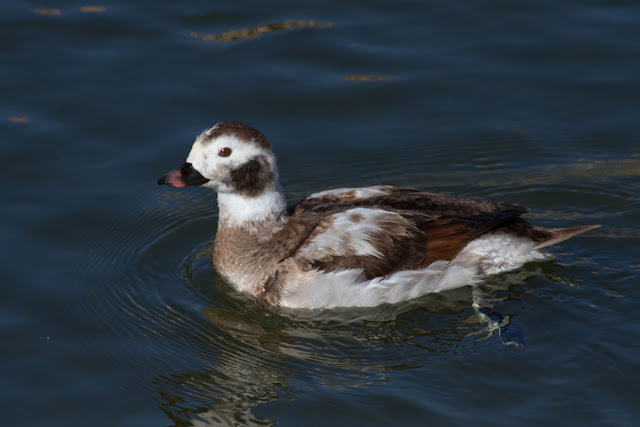 All completed so I made my way back to Malaga city to pay a very short visit to the Guadalhorce reserve, sort of make up for missing out last Saturday due to the rain.  No shortage of either Spotless Starling  or Cormorants and, on reaching the Laguna Grande, took a quick count and estimated that any one moment there were over 200 present.  A Heron was resting on the far bank as I made my way to the hide and I also recorded Zitting Cisticola, a couple of Stonechat and Black Redstarts.  On the water both Little and Black-necked Grebes, at least ten of the latter, and about a score of Shoveler and handful of Pochcard.  A few Moorhens, a small party of Black-winged Stilts on the far island and just the single Yellow-legged Gull.

The Lagua Escondida produced a number of White-headed Ducks  and Crag Martins feeding overhead.  The sun still shining so took the opportunity to walk over to the eastern arm and found Coots and Little Grebes on the Laguna Casillas.  The Wader Pool was very quiet with just a quartet of Black-winged Stilts and a single juvenile Flamingo.  A Marsh Harrier appeared overhead along with a trio of screaming Monk Parakeets and then White Wagtail and Greenfinch as I made my way to the old river .  Here I did find a few waders in addition to another handful of Black-winged Stilts.  A single Black-tailed Godwit, a couple of Sanderling and a single Green Sandpiper.  A Sardinian Warbler fussed about the bushes and my walk back to the car produced a couple of Blackbirds and a resting Kestrel.

Check out the accompanying website at http://www.birdingaxarquia.weebly.com for the latest sightings, photographs and additional information.
Posted by Bob Wright - The Axarquia Birder at 13:09