A day's birding in Almeria

Car still in the garage so making the most of using the miles on the three day rental.  Lovely sunny day with not a cloud in the clear blue sky and the temperature reaching 27C by afternoon so no wonder I wandered up to Almeria.  Long day and needed to stop for a half-hour sleep on the way back - and also try and compensate for the bright evening sun coming straight at me, disadvantage of spending a day travelling eastwards!   So it was off to Las Norias first and even with a normal start still on site by 10 'clock thanks to the new, continuous, motorway.  Then followed the salinas at Roquetas de Mar and finally almost a couple of hours at Cabo de Gata so that I could still start the homeward journey by just after 5pm.  More than a little tired by the time I got home so this report is going to be a day late, especially as I am using the final day of the rental to drive up to Ventas de Zafarraya, the woods at El Robledal and then back down the mountain track to the Alcaucin picnic area.

A Flamigo flew over the road as I approached Las Norias and once parked up on the first crossing I was immediately greeted by a Moorhen feeding on the grass verge on the right and, with the sun fully in my eyes to the right, looked left to see the mass of Cormorants and Coots at the far end.  Nearer to mind a plentiful supply of Red-crested Pochards with just a handful of Common Pochards.  No Mallards and very few Shoveler but I did find a single Gadwall.  Not to be outdone, Little, Black-necked and Great Crested Grebes were in front of me and, ironically so, more of the Great and less of the Little!   A White Wagtail wandered by and on the far bank a single Green Sandpiper.

Moving down to the last crossing neat the waste plastic factory, I soon added a Hoopoe, Crested Lark and Robin.  Just the one Grey Heron but then a pair of roosting adult Night Herons.  No shortage of House Sparrows, Spotless Starlings and Collared Doves along with busy-feeding Chifchaffs and, over the water, my first Barn Swallow of the year.  The visit was completed by adding both Black Redstart and Stonechat.

Arriving at the salinas near Roquestas de Mar the first stop was on the waters near the lighthouse.  Not a lot to be seen other than scores of Flamingos and the off Lesser Black-backed Gull.  Then, high above in front of me, first a Buzzard followed by a Marsh Harrier.  Leaving the site I had the pleasure of a winter plumage Reed Bunting on the track in front of me.  Driving round to the fresh water lake I added a single Magpie and a couple of Kestrels before encountering the feeding Crag Martins over the water and a whole host of Common Coots including the "piebald" Coot.  Lots of Gulls and mainly of the Back-headed variety.

The final part of the morning was spent wandering along the sandy tracks, dodging puddles and holes, around the swampy salinas on the far side of Roquetas.  Strange to see a Black-tailed Godwit feeding on its own andthen, almost immediately, a single Greenshank feeding in one of the track puddles.  Mallards to the fore and then hundreds of Shovelers on most of the larger waters along with a good smattering of Coot and Flamingo.  The shallow edges to my right hosted feeding Little Stints and a Common Sandpiper along with a single Turnstone. 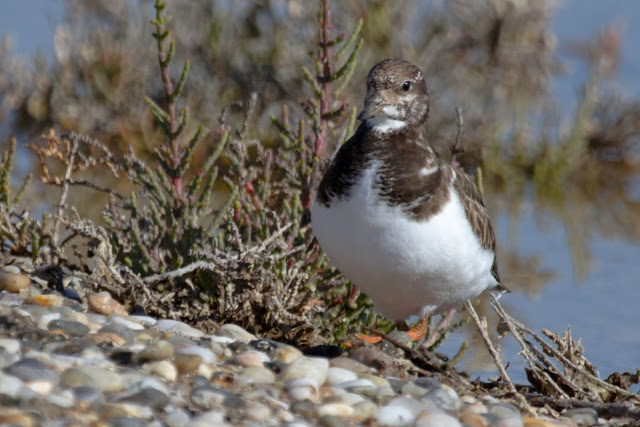 Taking a right turn  I came across my first of many Black-winged Stilts. The next water through up Redshanks and then a single Great White Egret took fright from almost under the wheels of the car.  This final, large, water also held a large colony of mixed gulls, mainly Lesser Black-backed and Yellow-legged but also a handful of Slender-billed Gulls.  Working my way back to the road I also recorded a small flock of Greenfinches and a couple of Blackbirds.

Full speed ahead now towards Cabo de Gata and a picnic stop at KM4.  Nothing to be seen but I did get chance for a rest.  Approaching the village I had Collared Doves on the wires and a coupe of hovering Kestrels.  But it was straight to the lighthouse for my target bird picking up both Black Redstart and Black Wheatear as I climbed up the last peak and then down to the road's end.  Only House Sparrows and Crested Larks to be seen so I quickly moved round behind the area on the service road to the customs station or whatever it is on top of the hill.  Parking in the same place as three weeks ago I just looked around, found the Trumpeter Finches and happily took photos as the birds went about their bust feeding activity.  Indeed, driving on a short distance to turn round I then parked within five metres of the Trumpeter Finches and was able to continue photographing albeit across the empty passenger seat.

From the "Public Hide" I was able to get good views of Flamingos to the left along with a small number of Avocets and many Black-headed, Lesser Black-backed and Yellow-legged Gulls to my right.  Looking closer at the gulls as they rested on a rocky bar I was also able to pick out the score or more of Sandwich Terns.  Smaller waders included Dunlin and Little Stint along with Black-winged Stilt and Redshank.  Needless to say, there were also Cormorants to be seen.


My final stop was at the last hide on my way out of Cabo de Gata before setting off on the long journey back to Mezquitilla.  Here I found a good number of Shelduck along with some rather delicate looking Mediterranean Gulls.  Just two Little Egrets and the final birds of the visit were Collared Doves and Greenfinches.

Check out the accompanying website at http://www.birdingaxarquia.weebly.com for the latest sightings, photographs and additional information.
Posted by Bob Wright - The Axarquia Birder at 07:22