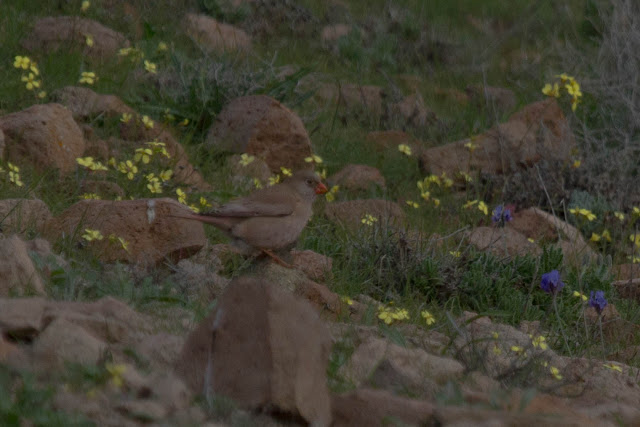 Up and out of our hotel straight after breakfast and check out the nearby hide at the top end of the salinas before heading straight off to the light-house in search of the Trumpeter Finches and the hope that we might get a few decent photographs.  Collared Doves on the wire behind us along with a couple of White Wagtails whilst on the water we could pick out distant Flamingos and Avocets.  nearer to the hide we had a couple of Black-tailed Godwits along with both Greenshank and Green Sandpiper.  Finally, a Dunlin was recorded before we set off in search of the Trumpeter Finches at the light-house, passing both Stonechats and Spotless Starlings on the way.  Indeed, a stop overlooking the sea near the start of the climb up the Sierra Cabo de Gata produced both Black Wheatear and Black Redstart. 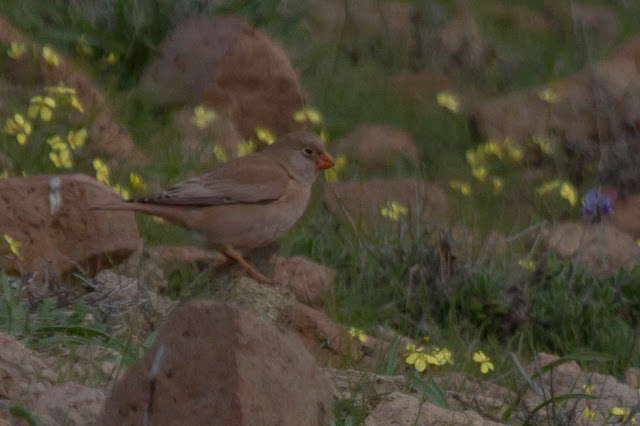 No sooner had we parked at the light-house, all on our own so, hopefully, no disturbance for a short while, we found our target birds.  Below us a sea level we had both Cormorant and Little Egret.  Lots of photographs taken by Steve before we moved round to the mountain road behind the new information centre building (?) so giving a chance to cover the bank that stretched from here to the former stop.  In total we must have recorded at least twenty individuals along a with a few House Sparrows and even a pair of Sardinian Warblers and the odd Crested Lark for good measure.

Time to eventually move on to the public hide overlooking the salinas where we saw many adult Flamingos and Avocets.  A small flock of Shelduck were feeding on the far side of the water and Black-headed, Lesser Black-backed and Yellow-legged Gulls were present in good numbers.  Waders included Little Ringed Plover, Redshank, Sanderling and a single Grey Plover whilst on the end water to our right we also picked up Black-winged Stilt.  Amongst the many, mainly Black-headed, gulls on the shallow spit of rocks we also noted a small number of resting Sandwich Terns.
In the nearby vegetation we had feeding Greenfinches, Sardinian Warblers and Chiffchaffs.  Crag Martins fed over the water and the occasional White Wagtail wandered by.

Missing out the remaining hides we headed straight to the Rambla Morales where, unexpectedly, we found the river levels still very low with just a narrow channel of water down the middle.  Obviously, not as much rain as we thought when seeing yesterday's numerous flooded tracks. here we found just a single Coot and a handful of Kentish Plovers but also a small charm of Goldfinches.  However, the surprise package here was the small Kestrel-like bird that flew straight into the middle of a small, thick bush then shot out on our side and disappeared at low level straight down the rambla on a parallel course close to the ground like the proverbial "bat out of hell."  How else would you describe a Merlin?  The drive towards Retamar produced both Kestrel and a Buzzard on poles along with at least a quartet of Hoopoes. 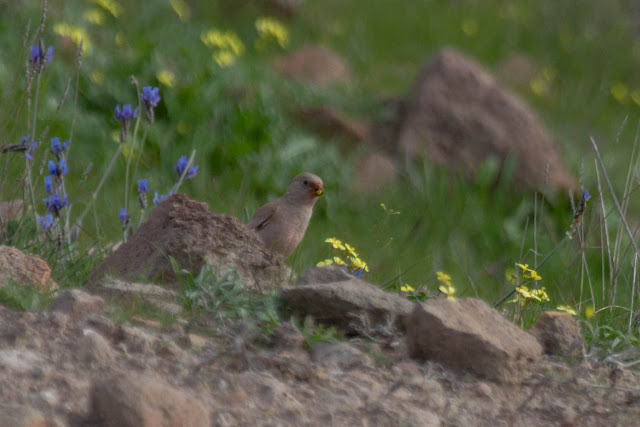 Back in the Dotterel wintering area and despite a good walk, which produced a rapidly departing Stone Curlew for Steve, nothing found other than more Iberian Grey Shrikes, Crested Larks and Greenfinches.  Similarly, the open field alongside the main road produced no Dotterel but at least the small flock of Sky Larks were still present and along with a good-sized flock of Serins and a few accompanying Goldfinches whilst a number of Meadow Pipits fed with the larks.  Even a stop for coffee in Retamar before setting off on the return journey produced of all birds some screeching Monk Parakeets!

Check out the accompanying website at http://www.birdingaxarquia.weebly.com for the latest sightings, photographs and additional information.
Posted by Bob Wright - The Axarquia Birder at 10:27