Meeting of the Andalucia Bird Society at Bonanza, Cadiz on Saturday 15 October so it seemed a good idea to travel via La Janda and see if the Spotted Eagle might be about; it was not as far as I was concerned.  On the other hand, Jenny and I had a good selection of birds, all seen through the one eye, including some lovely raptors. 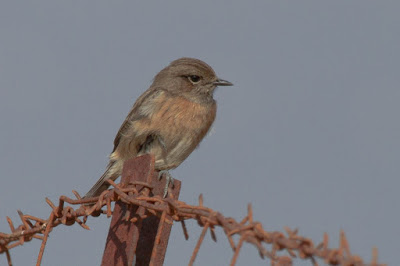 Birds from the off including a selection of small birds including Corn Bunting, Stonechat, House and Spanish Sparrow, Crested Lark, Serin and Goldfinch and, of course, no shortage of White Storks, Little and Cattle Egrets and Grey Herons.  It was also lovely to see a few Spoonbill and our first Marsh Harrier of the day before adding Buzzard, both Lesser and Common Kestrel, a female Hen Harrier and, only just in time, a fleeting glimpse of the visiting Spanish Imperial Eagle.

The “pool” in the rice fields was not as active as on our last visit but it did contain a pair of Wood Sandpipers and, nearby, the one Snipe.   Overhead, feeding Barn Swallows and a steady supply of Cetti’s Warblers in the reeds next to the canal.  A Green Sandpiper flew up and out of the ditch and more and more Jackdaws and Spotless Starlings put in an appearance along with the first of the Lapwings on the fields on the other side of the canal.

Working our way up to the “smelly farm” with many Wood Pigeons overhead, after seeing the Imperial Eagle we had another Bonelli’s Eagle and a couple of Pheasants before the Ring-tail whilst a pair of Ravens worked their way across the sky to take on the Bonelli’s Eagle.  The Little Owl was on its regular resting rock and turning left at the junction we came across a Black-winged Kite that simply refused to fly away!  Finally, on the pool formed by the stream, we added Coot and Little Grebe.  Then it was on to Chipiona at the mouth of the mighty Guadalquivir for our two-night stay.

Check out the accompanying website at http://www.birdingaxarquia.weebly.com for the latest sightings, photographs and additional information.
Posted by Bob Wright - The Axarquia Birder at 00:01