Back to the apartments we were once again able to visit the natural lake below the 17th green of th golf course.  Water levels were only slightly down but lots of cover for the wintering and resident birds, including the free-breeding wild Muscovey Ducks which seemed to have had a great breeding season.

On arrival a couple of Purple Swamphens were walking the edge of the green before returning to the water where there were very many Mallards along with a plentiful supply of Teal and Gadwall and Shoveler.  Also lots of Coots and Moorhens plus Little Egrets and Herons.  Both Snipe and Redshank were recorded but the majority of waders were Black-tailed Godwits.

With the light dimming and the sky starting to take on a red glow, we looked behind us in time to see a lone hawking Black-shouldered Kite which proved very popular to all present.  then it was on the artificial lake at the back which is used as a water supply where we found many duck, mainly Shoveler, Mallard and Gadwall but also both Common and Red-crested Pochard.  However, the prize sighting was the quartet of resting Wigeon rather than the main flock of Muscovey Ducks. 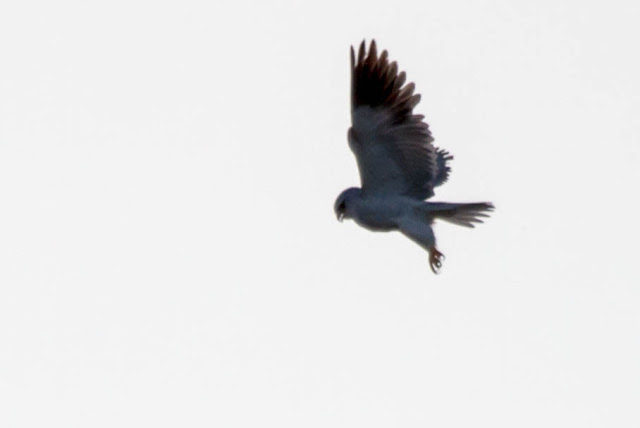 Check out the accompanying website at http://www.birdingaxarquia.weebly.com for the latest sightings, photographs and additional information.
Posted by Bob Wright - The Axarquia Birder at 01:53