We had intended to ravel over to Portugal to find the main salinas near Tariva, especially as I seemed to be one of the very few who had not seen a Spotted Redshank during the past three days.  In the event we decided to make a brief return to the riverside reserve  near Castro Marin and then take a final look at the old salinas below the village.

Entering the reserve we soon encountered the resident House Sparrows, Corn Buntings and Crested Larks before the first good-sized flock of Spotless Starlings.  Cattle Egrets and Mallards flew over and then a lovely posing Iberian Grey Shrike on the hill-top fence to our left.  Then it was the first of a number of Northern Wheatears before finding the Black-winged Stilts along with Redshanks in the pools on our right.  Stonechat, Green Sandpiper and Little Egrets were soon added and then to the Visitors Centre.  Whilst here we also added both Avocet and Yellow-legged Gull.

The big surprise on leaving the Centre was to see a Carrion Crow, yes a Crow with its long tail, fly over the building and away towards the river.  The large muddy area opposite held a few Dunlin and even a couple of Spoonbills flew away. 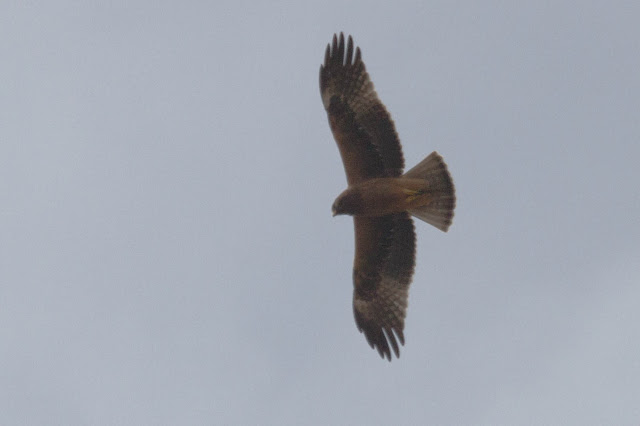 Leaving the centre on the return drive we had a couple of Magpies and a pair of Ravens fly past then stopped to take a closer look at the large raptor above us.  Definitely an eagle and the photos confirmed that we had seen an impressive mighty Iberian Imperial Eagle (seems strange to call it "Spanish" on the other side of the border).  The juvenile Bluethroat was found on the same bank as on Monday.  This area also produced both a Black Redstart on the ruined building and a nearby Dartford Warbler with a covey of Red-legged Partridges at the back. 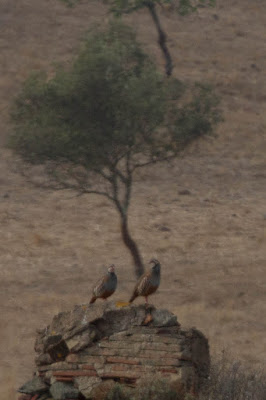 Next u was another great sighting; a dark morph Booted Eagle so intent on preening that it refused to move away from its chosen fence post giving us marvellous views - and the Azure-winged Magpies that did their best to, unsuccessfully, move it on.  What a way to end this part of the visit.


Moving along the road the salinas visited on Monday were, like the pond last night, rather depleted in species and numbers.  We picked up Heron, Sanderling and Redshank.  Knowing that our visit to Ayamonte and its environs had come to an end we drove the car as far as we could, not very far, along the track and found a Kestrel and distant Flamingo.  A Zitting Cisticola put in an appearance and then, on the last corner before arriving back at our usual parking place, I happened to look across the tall grasses and see a grey/white wader.  I recognise that colour and shape!  Yes, our very last sighting was that of a wintering Spotted Redshank and it remained long enough to get plenty of photos as can be seen.

All in all, a great five day with great company and, by coincidence, an absolutely wonderful way to spend one's birthday; good company and good birding with special thanks to all for helping out this old one-eyed birder see what he couldn't on his own.

*  More shots of the Booted Eagle and Spotted Redshank on separate blog.

Check out the accompanying website at http://www.birdingaxarquia.weebly.com for the latest sightings, photographs and additional information.
Posted by Bob Wright - The Axarquia Birder at 02:19