Frampton Marsh with the One-eyed Birder

Dry and cloudy when I left home but obviously, when I arrived at RSPB Frampton Marsh near Boston, there has been heavy overnight rain here, one has to take the opportunity to try and gets some biding in, everybody else seems to manage.  So here I was, having noted Crow, Rook and Wood Pigeon on the approach road, just after 9am and, having been greeted by the first Magpie of the morning, all set to try and see if I could get the eye working; obviously not as there seemed to be a series of puddles rather than pools.  Either I was seeing only half of the water or I was, potentially, in for a disappointing morning.  And if you think watching with one eye on the bins then try taking photographs the "wrong" eye and as for a left-eyed telescope....  So initially parked up at the end of the lane just before the steps up to the embankment, no was was I going to expose the eye to a walk along the top overlooking the Wash marshes and the penetrating wind that would do absolutely nothing for my eye, I quickly encountered Moorhens, Teals, a single Canada Goose and Little Egret along with a small number of Wigeon on the marsh. 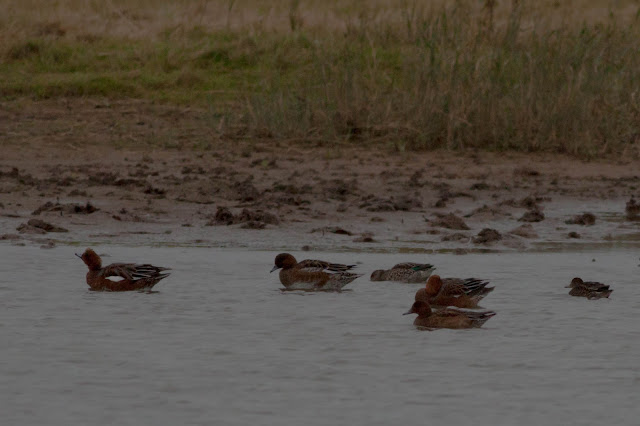 But turning round revealed the hundreds or more Wigeon on the fields behind me.  By the time I left the reserve I would estimate that was well in excess of a thousand Wigeon and at least 500 Teal on the reserve.  Finally, as I was getting into the car to move back towards the track to the 360Hide a Sparrowhawk casually drifted immediately overhead and over towards the Wash marshes.  A Green Sandpiper took off away to my left and a Blackbird crossed the road.

All rather quiet as I surveyed the surrounding areas to the 360 Hide and, at first, the birds rather distant.  Lots of Wigeon and Teal then a walk past by a lone Little Egret.  I could see distant Black-tailed Godwits, Dunlin and Ringed Plover and, again, after a patient wait a few managed to come closer to the hide.  A number of Moorhen were moving about and walking over the to the opposite side of the hide to check out the water towards the East Hide I was delighted to see a small flock of Brent Geese.  Closer inspection with my left ye on the scope also produced both three Avocets and a pair of Golden Plover not to mention Common Redshank.  Another look from the original window where the Dunlin were now rather close and then its off top the East Hide.

Once inside the East Hide I had reasonably close views of about twenty Brent Geese and resting Teal.  Looking behind me from near the door I also happened to be in time to see a passing Shoveler whilst a single Mute Swan occupied a nearby channel.  It was whilst approaching the hide where I saw the Mute Swan that I also noted distant pair of "pale" waders and using the scope was most please to find the pair of Spotted Redshank that had been seen earlier by neighbouring birders.  Also present on the same pool were a couple of Tufted Ducks. 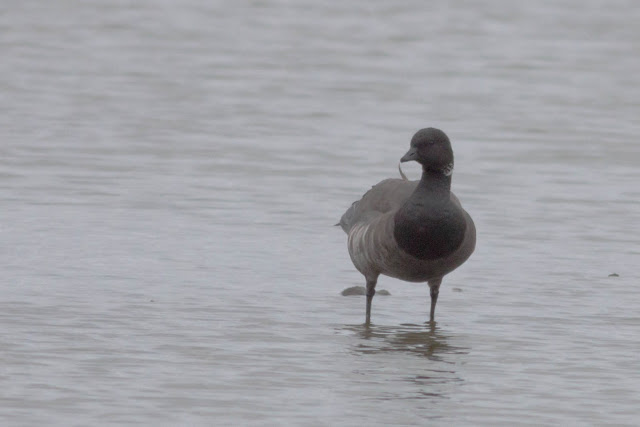 Back next to the Reedbed Hide where I finally found the Mallards and a couple of Shelduck.  Lots of Moorhens and more Teal and Wigeon plus a lone Cormorant.  A flock of Dunlin with the occasional Ringed Plover where also present and then a mall charm of Golfinches flew over the water to their next feeding stoop.

Finally, back to the main car park, passing Crows, Magpies and Wood Pigeons, and a stop at the Visitors centre to check out the feeding station.  Lots of Greenfinches and Tree Sparrows about along with more Goldfinches.  But looking at what I assumed was a Kestrel in the distant dead tree turned out to be a rather more exciting sight, that of a resting Merlin.  No point trying to photograph through the glass so went outside to discover a bare branch - but the Merlin had simply swapped sides, albeit with a branch masking the4 shot.  Off the bird went whilst I watched a flock of about 50 Golden Plover pass over in front of the hide and then, looking towards the sea bank, at least 200 Brent Geese arriving on the reserve.  By now the Merlin had returned for a short stop quickly followed by a Crow.  No sooner had we seen the Marsh Harrier than a neighbour pointed out the distant Pintail and checking with the Centre's scope I was able to confirm there were indeed three individuals.

Then it was off home, and both Kestrel and Crows on the wires a the reserve's exit followed by large numbers of Crows and Wood Pigeons as I travelled the narrow exit lane back towards the village of Frampton.  Taking the Centre's advice to look in at the Willow Tree Reserve near Tongue End on the undulating back road between Pode Hole and Baston Fen, I found the site almost deserted of people and just a couple of Moorhens on the water. Then a Jay flew across the track accompanied it seemed by a kestrel into the neighbouring trees so, perhaps, the very slight detour was well worth while.

All finished, I thought, but as I passed one of the flooded Baston gravel pits near the road I stopped to look at the sizable flock of Black-headed Gulls along with a good number of Jackdaws.


Check out the accompanying website at http://www.birdingaxarquia.weebly.com for the latest sightings, photographs and additional information.
Posted by Bob Wright - The Axarquia Birder at 12:15