Looks like I was not the only one out and enjoying Sunday's glorious weather.  Whilst Jenny and I were over on the Malaga/Cordoba border at the Embalsa Iznejar with Mick Richardson looking at all the different orchids (and birds), John and Jenny were experiencing the wonders of the Rio Genil as per the following report from John.  More from me as soon as possible.

Photograph opposite by Jenny Wainwright


Wow, a real warm one today - 27C on the car temperature gauge.

As we approached the bridge over the Rio Genil a large flock of Jackdaws came over the tree tops, also here we saw Azure-winged Magpies, Rock Doves, and a few Wood Pigeon.

As we stopped to photograph some Moroccan Orange-tips, a Wryneck called from the trees opposite and we saw here also Wren, Blackcap, Serins, Chaffinches and several House Sparrows. Further along the track we just managed to see a Bonelli´s Eagle being harassed by two Jackdaws. Cetti´s Warblers and Nightingales were in full voice all the way along this river.  Wood Pigeons leaving the trees - with their familiar "clatter of wings" - put out Spotless Starlings, Blackbirds and Mistle Thrushes.  A Wryneck started calling again and it was spotted close to the top of a fir tree.

Out in the open fields we saw lots of Crested Larks and in the small bushes to our left we found Great Tits, Goldfinches, Sardinian Warblers and a Green Woodpecker was heard.  On the cliff top a Blue Rock Thrush was seen displaying.

Retracing out steps we located a Woodchat Shrike and several Greenfinches, a Hoopoe, Short-toed Treecreeper, Red-legged Partridges and a Blue Tit.  We stopped again where we had seen the orange-tips and a Scops Owl started calling and a Nuthatch was seen.  And at the old "dovecot" we saw a Blue Rock Thrush, House Sparrows, two Red-rumped and some Barn Swallows, a Collared Dove and a couple of Rock Doves. 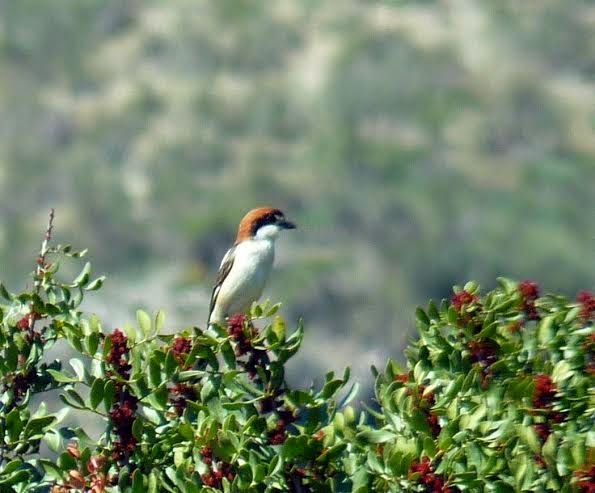 Butterflies were in good numbers with the majority being the Moroccan Orange-tip, with Common Swallowtails, Large and Small Whites, Bath Whites, Speckled Wood, Adonis Blue and Brimstone.