Birding in Two Provinces - over 60 species


What a long, busy day.  Out of the house by 8 o'clock to spend a couple of hours with Mick 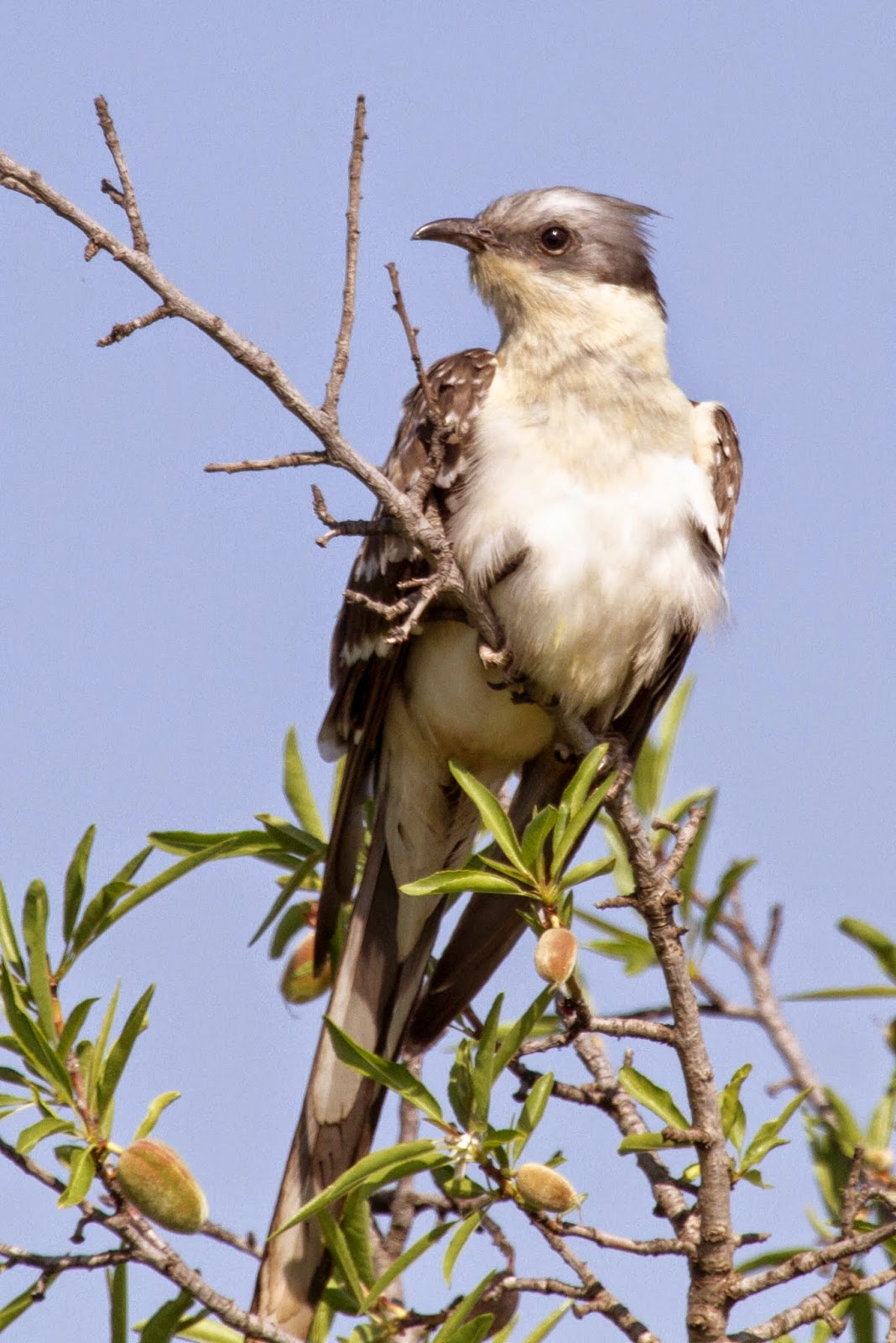 Richardson in Granada province then the long drive over to Ronda to collect the latest ABS quarterly magazine with a stop at both the main quarry on the lower slopes of the Sierra Loja and Laguna Dulce (very much an in-and-out at the former) before returning via the bird-laden Fuente de Piedra - but late enough to miss most of the Easter holiday tourists.

The birding concentration was on the higher Cacin Valley with five target birds for the two-hour visit; the Little Owl being something of a bonus.  The journey over from Casa Collado had already produced Barn swallow, House martin, Rock and Collared Doves, along with House Sparrow and Goldfinch before I reached Ventas de Zafarraya and the provincial Malaga/Granada border,  Then it was Chaffinch, a number of Mistle Thrushes and a single Woodchat Shrike before entering the main area of the "Magpie Woods" where a number of Azure-winged Magpies were seen.  Driving across the arable fields to take the old, badly potted road up towards the Salar road I had first a couple of Common Magpies followed by Crested, Thekla and Calanda Larks.  Along the journey there was certainly no shortage of both Hoopoes and Corn Buntings.  And so to the meet with Mick and our move off to the designated site accompanied by the first of many Common Kestrels seen during the day as a whole.

No sooner had we arrived than a distant Black-bellied Sandgrouse took flight and resulted in a total of at least eight individuals moving across the sight.  Then, moving on to the old ruin, a Little Bustard came into view to be followed by a Short-toed Lark as we drove towards the neighbouring almond orchard.  The first Rollers had arrived in the area only a few days before so we worked our way round to their new nest site in time to see the target birds disappearing off towards the almond trees.  All that was left was yet another pair of Corn Buntings to add to the many already seen on site along with , as before, Crested, Thekla and Calandra Larks. 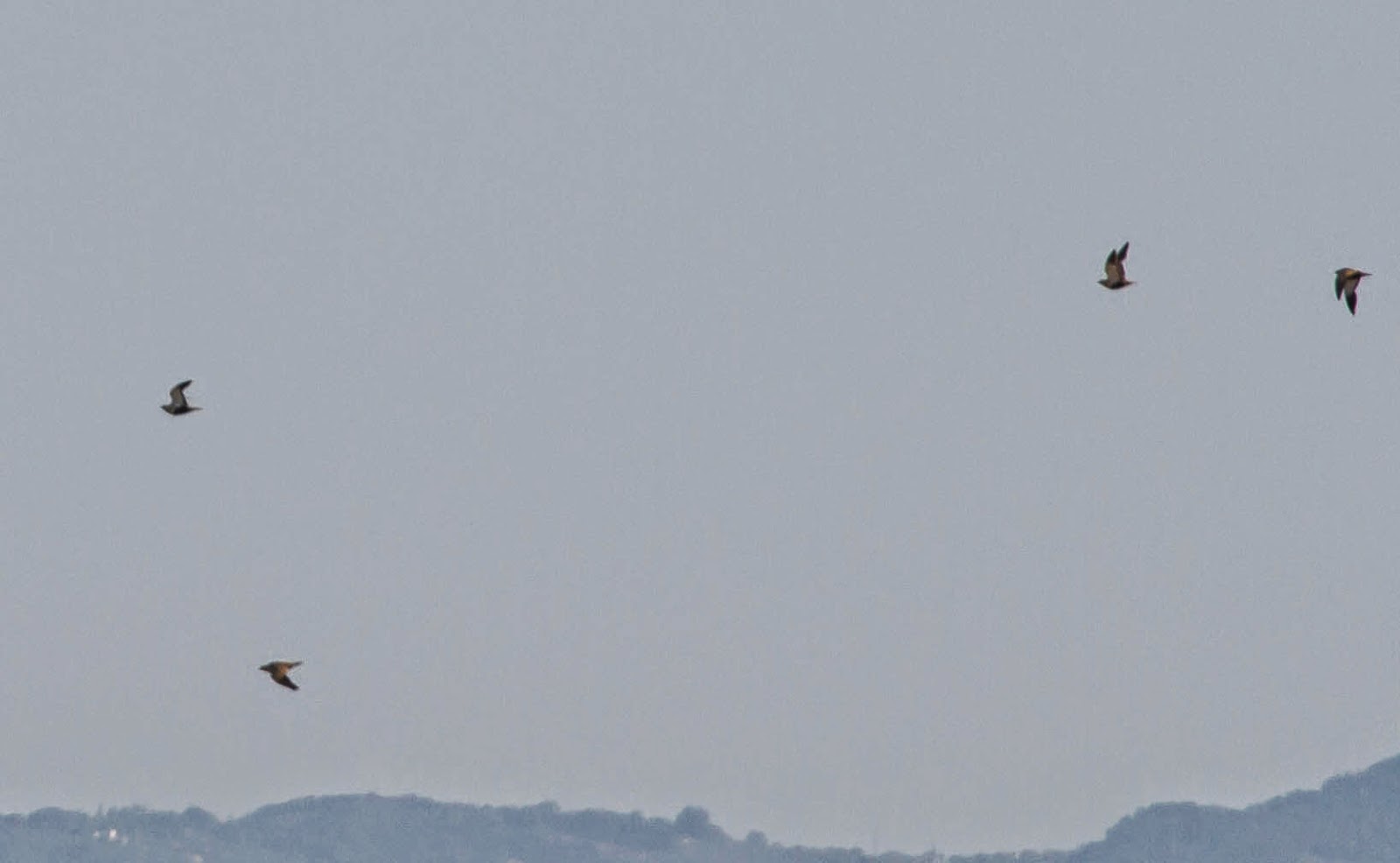 Both Wood Pigeon and Goldfinches were seen as we made our way through the avenues of trees in the orchard trying to seek out our illusive Roller whilst, at the same time, keeping in mind that we still had yet one more target bird to locate.  Then the bird was found but, too late, we were already within a couple of metres and the bird took off.  Ans so we crept and crawled along n the car trying to catch up with our target.  Eventually, we were to spend very many minutes with close views of the bird; a lovely site to see them in their natural habitat rather than simply sat on wires above a road. 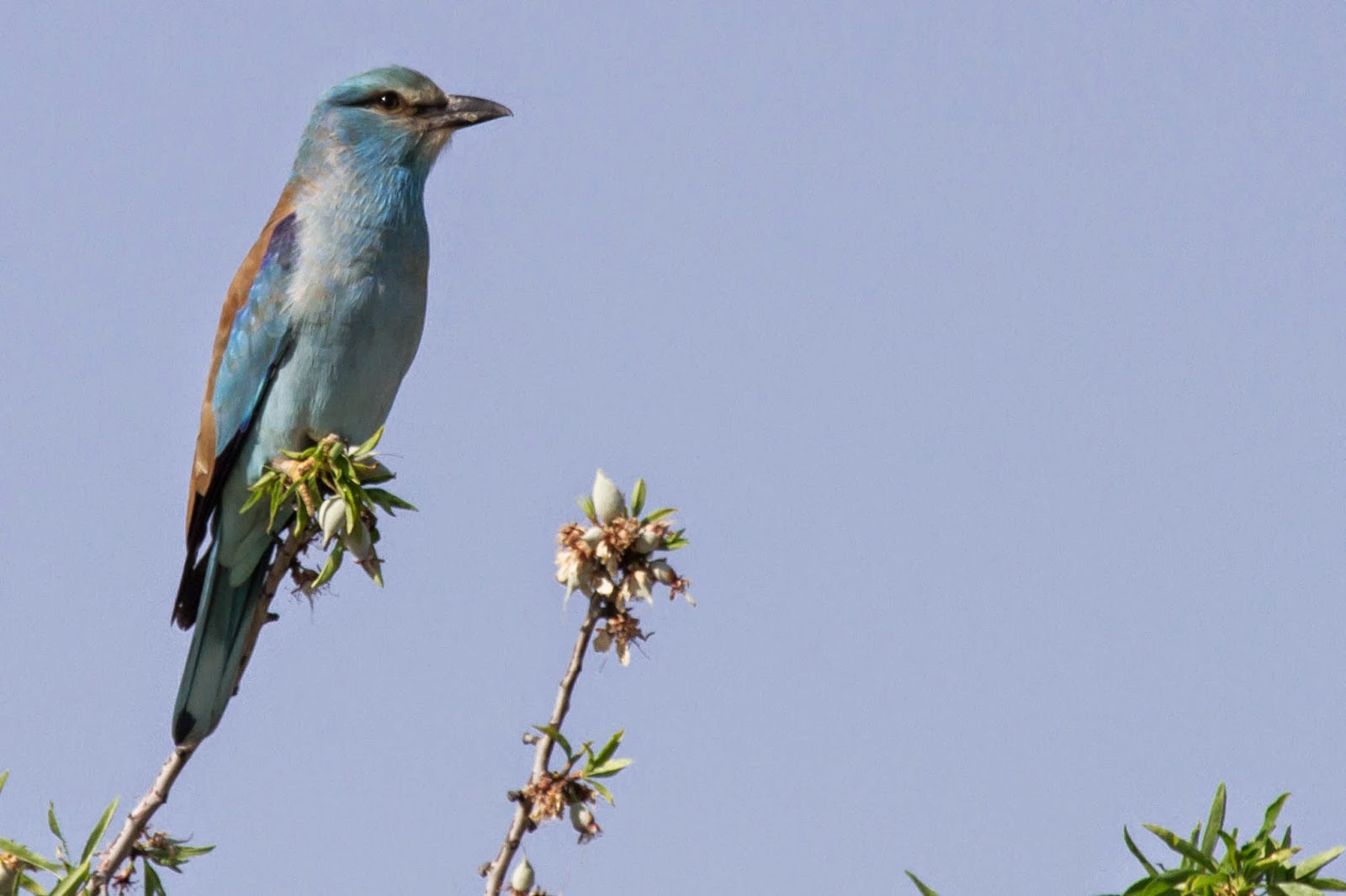 So, one species to go but not looking very promising.  Even Mick had to admit that he thought their numbers were down this year and so, finally, we took a final ride through the far fields to the next , large almond orchard.  Then, out of nowhere, Mick heard that distinctive call of a "yaffling" Green Woodpecker and a double dose of A class drugs and we saw a quick movement a few trees back.  Out of the car and a good walk round and, then, we managed to spot the bird almost hidden near the top of a well-leaved tree.  Yes, finally, we had found our final target bird, the Great Spotted Cuckoo.  Then, rather like the cream on top of the cake, as we drove to the end of the orchard I gave Mick the instruction to "Stop!" as, sitting well-exposed in a tree on his side was yet another individual.  Perhaps the Mapies have changed their preferred nesting site and the cuckoos have simply followed on. This was potentially born out when a Common Magpie landed in a tree not ten metres away where we could clearly see its nest.  Too late now to close the stable door! 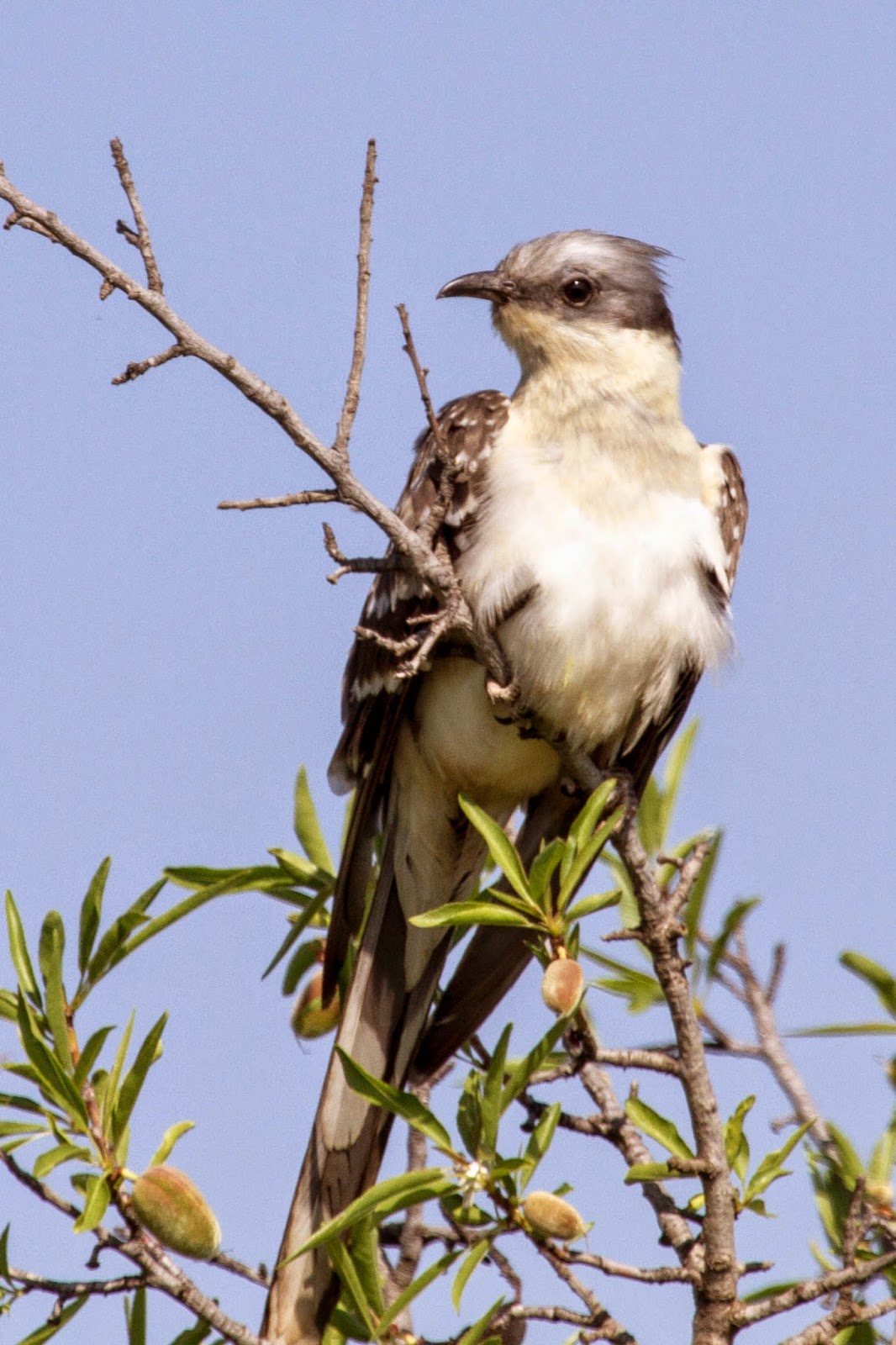 Job done, I left Mick to make mt way over to Ronda but, with about forty-minutes to spare, took the opportunity to take the track up the lower slopes of the Sierra Loja to check out the main quarry and see if the local Eagle Owl was once more on site.  No, it was not.  On the other hand, I did pick up a male Black Redstart, Stonechat, Crag Martins and Choughs overhead.  Then, as I drove back to the track back down to the petrol station, another Woodchat Shrike.


Onwards and westwards and still time to spend twenty minutes at Laguna Dulce to check out the present avian occupants.  On the way a small flock of Red-rumped Swallows crossed the road and at least forty Cattle Egrets feeding in a road-side field.  Lots of Common Coots but relatively few gulls of which most were Yellow-legged and Lesser Black-backed gulls.  A number of Grebes, mainly Black-necked but also both Little and Great Crested Grebes.  A couple of nearby Flamingos and then a small selection of ducks including both Common and Red-crested Pochard, White-headed Duck and Mallard.  A single Marsh Harrier quartered the far reeds whilst behind me a cacophony of song form the Cetti's and Reed Warblers.  Finally, it was a pleasure to watch the feeding Whiskered and Gull-billed Terns. 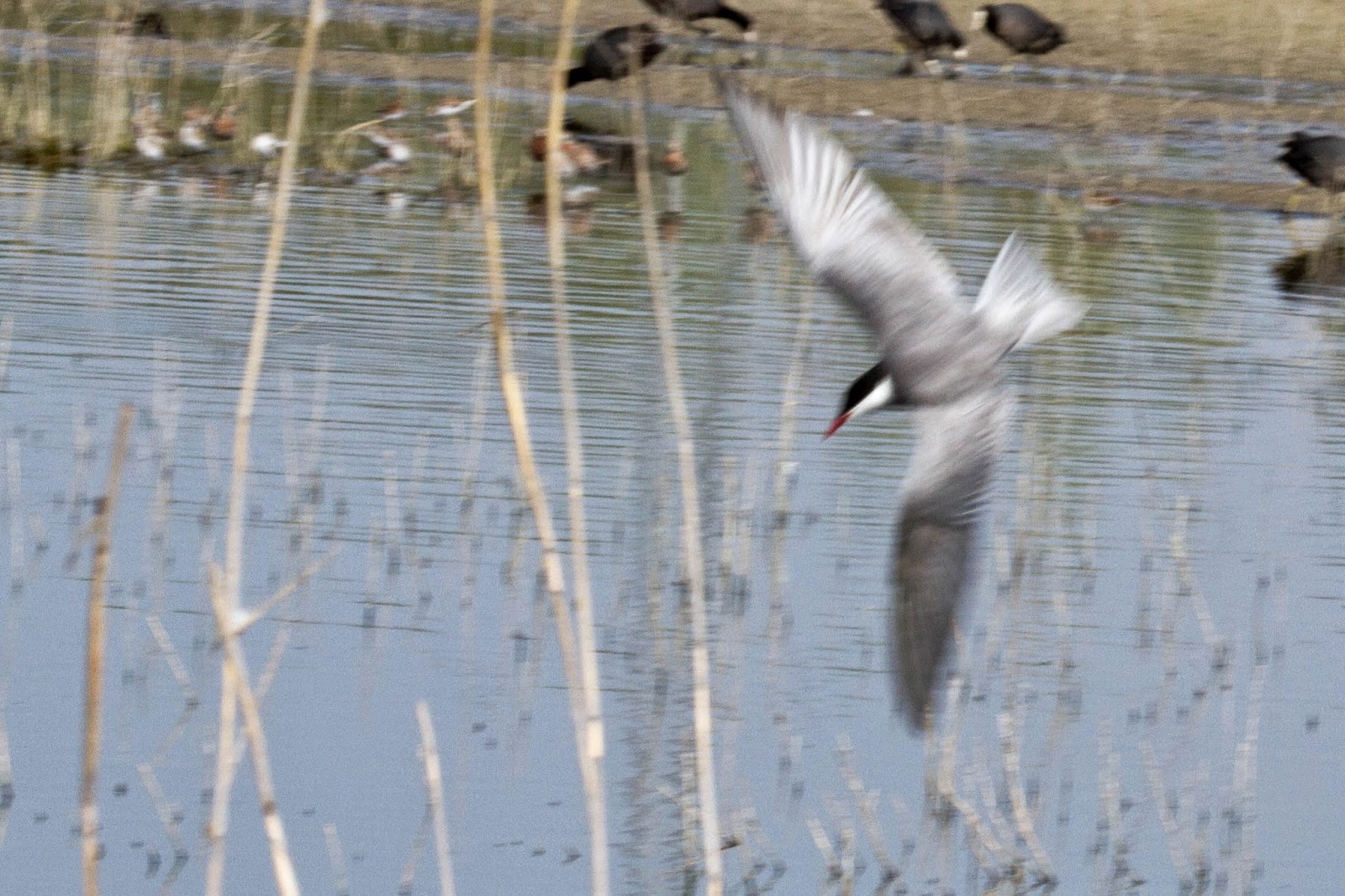 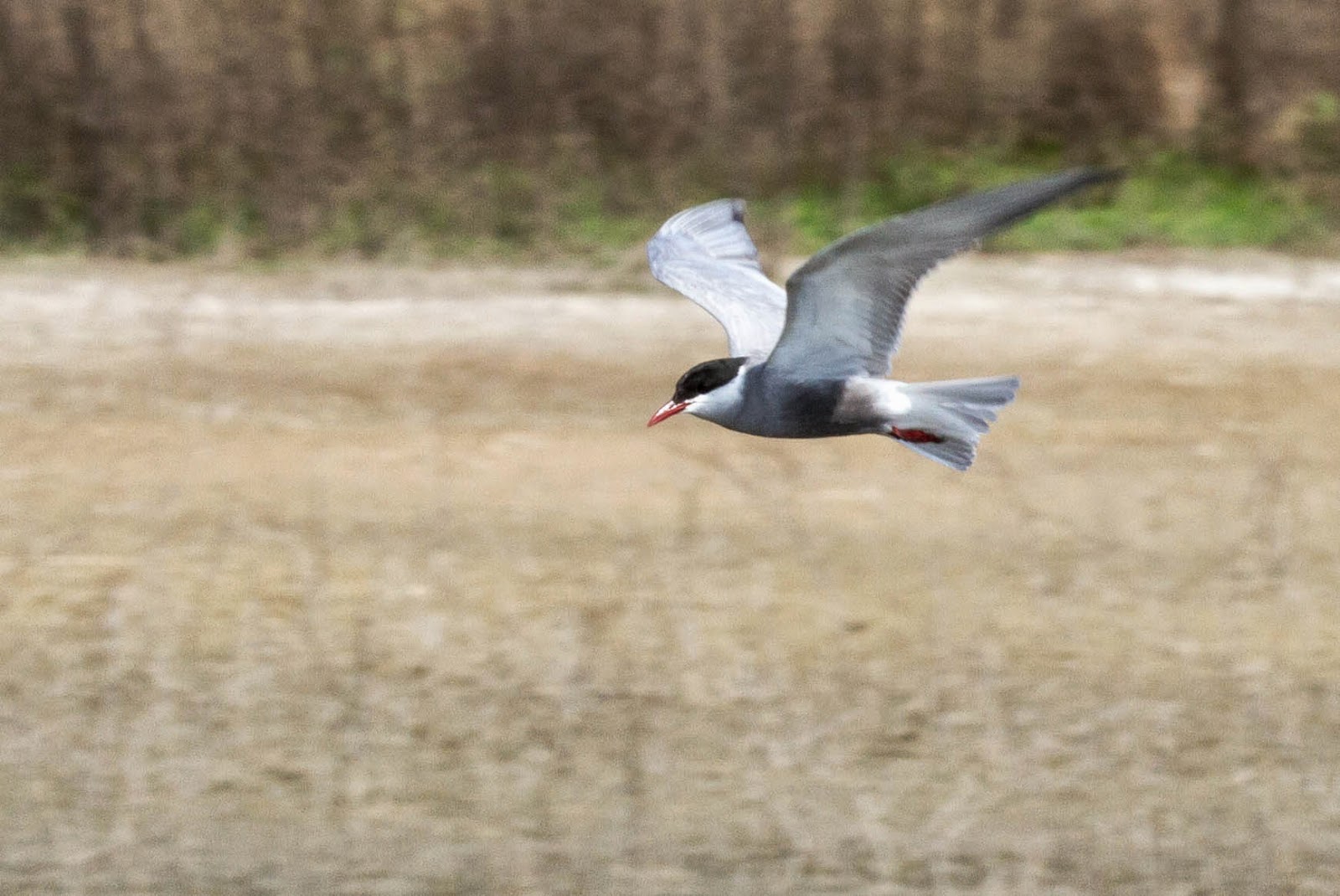 Business finished in Ronda and chance to wish Pieter a happy birthday, it was back to Fuente de Piedra, a passing Grey Heron overhead n the way, and a brief stop at the Mirador Cantarranas.  Lots of Flamingos to be seen but I decided to press on to the main entrance having heard that there were many waders to be seen on the flooded field on the left approaching the car park.  And that was certainly true with yet more Whiskered Terns also feeding from the surface of the water.  Also at this site were numerous Curlew Sandpipers along with a sizable selection of Dunlin, Little Stint, Ruff, Ringed and Little Ringed Plovers, Redshank and Common Sandpiper.  Both Coot and Black-winged Stilts were also making the most of this feeding opportunity whilst a number of Avocet fed near the far bank.

Too many visitors to make it worthwhile walking across the causeway so I concentrated on the laguneta at the back of the site.  A small number of Black-headed Gulls but also a Mediterranean Gull with an almost black head accompany the gulls an occasional Little Grebe.  Mainly Shovelers on the water, there was also a small number of Common Pochard, Mallard and Gadwall present.  Meanwhile, immediately in front of the main hide, there were a score or more of feeding Jackdaws on the field and a couple of Moorhen working their way back to the water.  Finally, the small pool in front of the smaller hide produced a pair of Red-crested Pochards and a couple of female individuals. 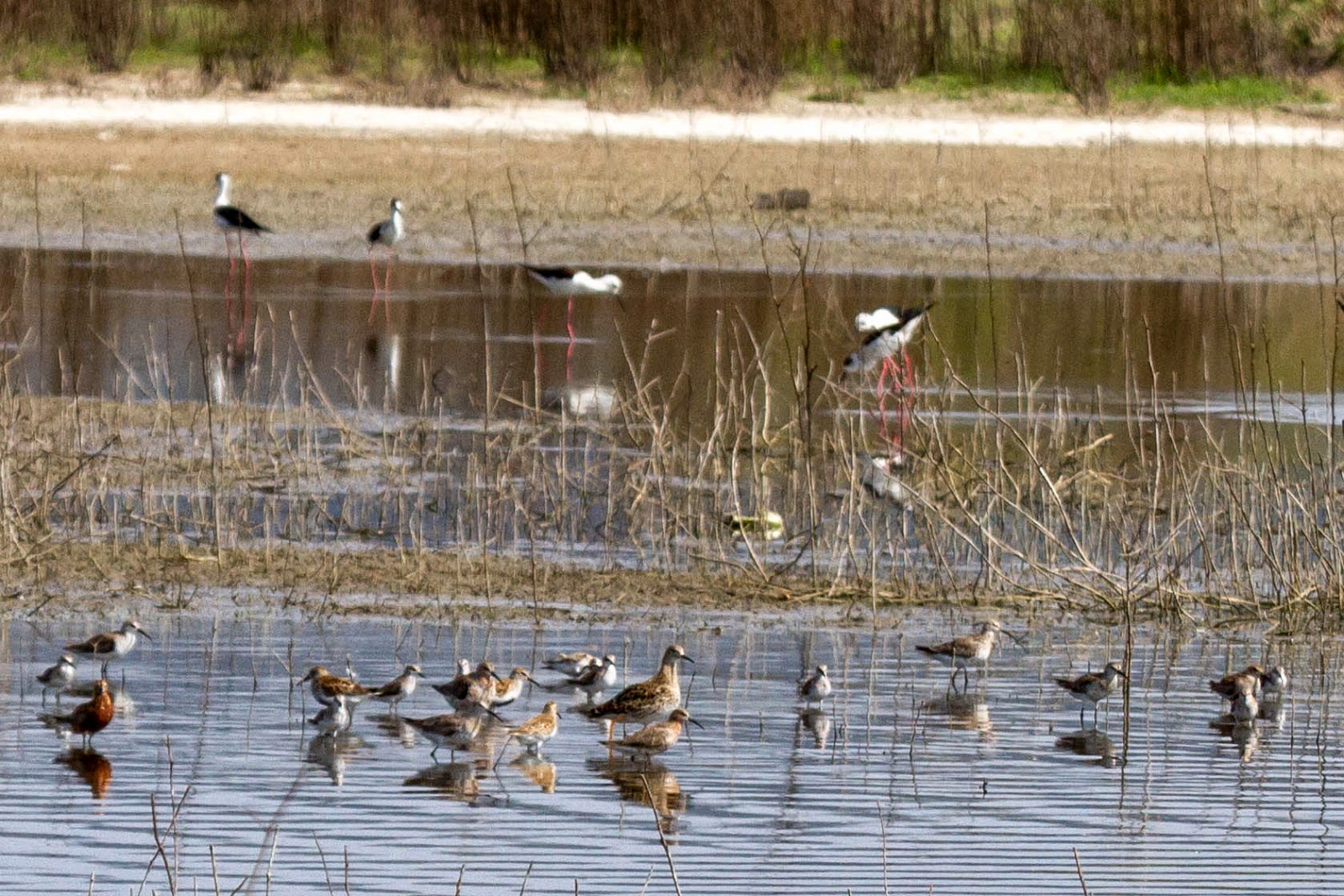 And so, eventually and much Later than I had intended, I set off for home having reached a total of 63 species.

Check out the accompanying website at http://www.birdingaxarquia.weebly.com for the latest sightings, photographs and additional information.
Posted by Bob Wright - The Axarquia Birder at 13:54