What a conundrum!  A White-headed Duck Oxyura leucocephala with a completely black head seem to have taken up residence on the Laguna Escondida down at the Guadalhorce reserve in Malaga.  But where did it come from, both literally and metaphorically?  Again, is it a pure White-headed Duck or some form of mutant and/or hybrid with the American Ruddy Duck Oxyura jamaicensis?  Lots of questions here that I, for one, would love to know the full answer. 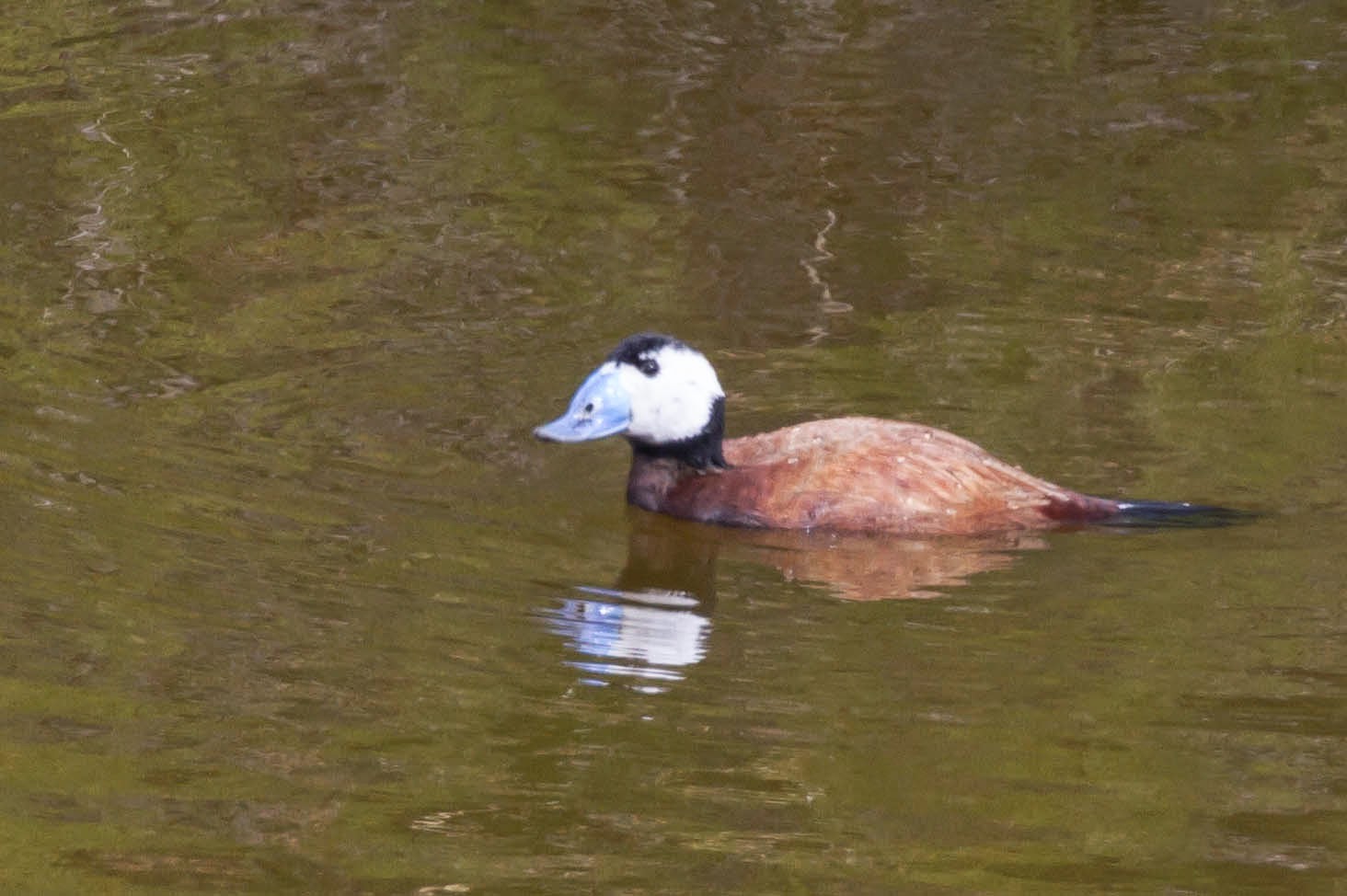 If a White-headed Duck, was the bird hatched at its present location and, if not, where might it have come from?  If it is a first summer bird, will its first full adult moult result in the duck growing back a more "normal" feather colouration?  If not, can we say for certain whether the bird simply has a colour "problem" (after all, we do come across very many aberrations in the wild bird stock of many species) or is it masking some "foreign" genes/DNA in its ancestry?  What to do it the latter?  If ever there was a case for bird ringing (banding in the USA) the, surely, this individual might be a prime candidate so that we can monitor its progress and development over the coming months.

Again, where did this bird spend its winter months?  There seems to have been no recorded sightings from the few birds that over-winter at the Guadalhorce so, perhaps, it was one of the hundreds that spent the winter months at the, relatively, nearby Laguna Dulce on the eastern outskirts Campillos.  If so, did it just "tag along" with migrating ducks and end up at the Guadalhorce purely by chance?  Will it return to the Laguna Dulce later this year?  Perhaps we should start scanning the wintering flock to see if there any any other black-headed variants which might imply that this is more than a case of an individual case.  But what to do then? 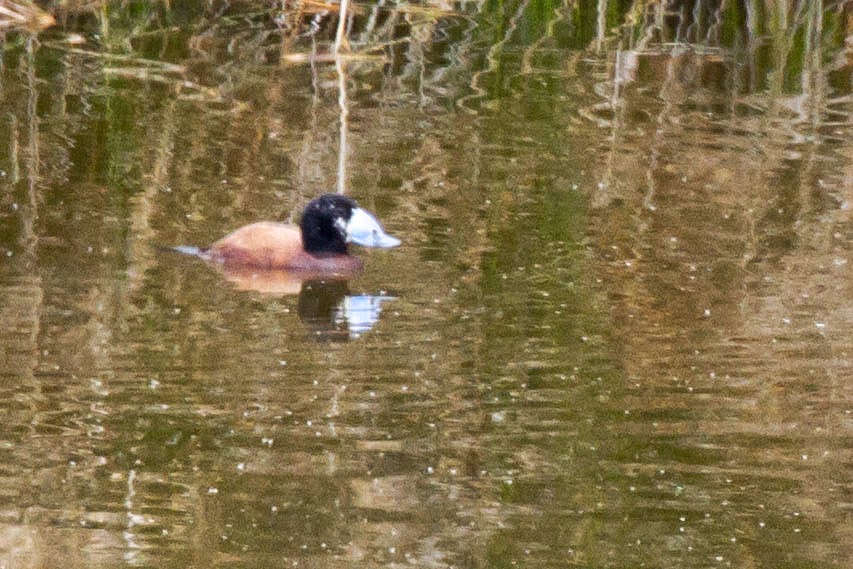 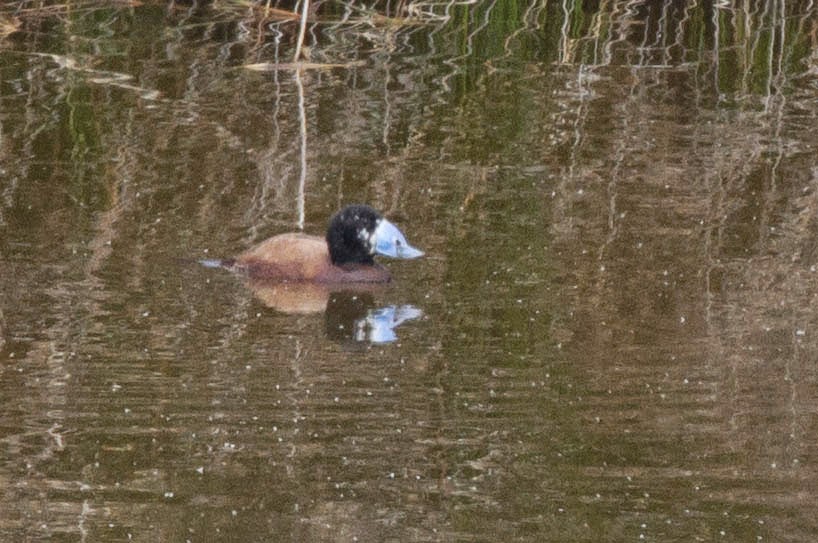 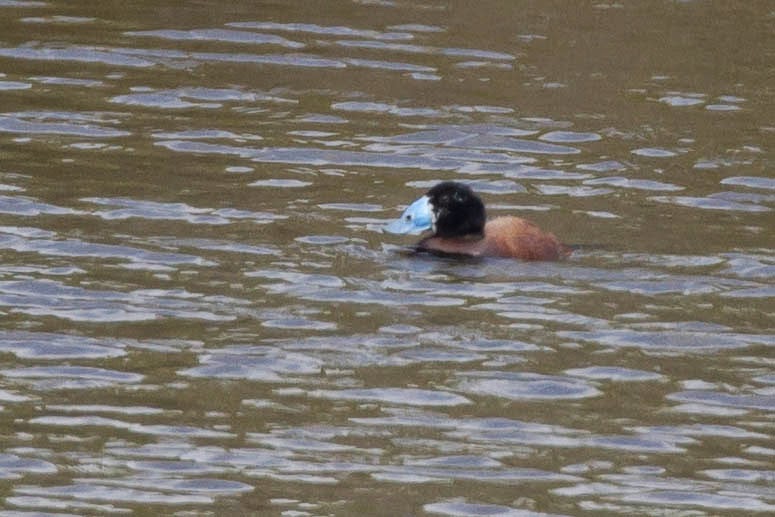 Taking a closer look at the three variants, White-headed, Ruddy and "Black-headed" Ducks and look especially at the bill.  You will notice that, in addition to the actual black and white pattern on the head, the White-headed Duck has a somewhat bulbous shape whereas the Ruddy Duck has a more "flattened" bill.  Now look at the black-headed individual and you will see that its bill is more the shape of the former.

What if the bird has some Ruddy Duck ancestry in its genetic make-up?  Given the extensive culling that has been on-going for the past six or more years resulting in the removal of, I believe, over 7000 individuals being shot or killed in some way to protect the wild White-headed Duck stock, then this bird must surely be living on borrowed time.  That then beggars more questions; from how far back in its ancestry does the Ruddy Stock genes emanate?  Is this a well-travelled bird from, presumably, northern Europe or do we have more pure or fertile Ruddy Duck hybrids already in our midst?

One would assume, I imagine, that the "nature police" must by now be aware of this individual and some professional consultation and advice has been taken.  No doubt, if the consensus is that this bird has any Ruddy Duck genes in its make-up then we will not be seeing the bird at the Guadalhorce for much longer.  From now on it is very much a case of checking the Escondida water on future visits to see if our black-headed White-headed Duck can still be located.  Watch this space whilst I await reports.

Check out the accompanying website at http://www.birdingaxarquia.weebly.com for the latest sightings, photographs and additional information.
Posted by Bob Wright - The Axarquia Birder at 01:18