Off to Ronda first thing this morning to collect magazines  followed by a stop at both Laguna Dulce and Fuente de Piedra on the return journey.  Leaving the motorway towards Campillos at least thirty Cattle Egrets feeding in the adjacent field which was in the process of being harrowed.  (on the return journey, the tractor had moved to the other side of the road and there was now in excess of forty individuals.)  Next to the egrets a solitary Kestrel kept watch of the process from a neighbouring watering pole whilst, quite unconcerned by the Kestrel's presence, almost an hundred Rock Doves also worked the newly ploughed field.

Leaving Ronda I had a quartet of circling Griffon Vultures above me and then, a little later, arrived at Laguna Dulce to see what was about.  As expected, hundreds of Coot and a very large number of White-headed Ducks plus very many Mallard and  Shoveler, a few Gadwall and a small number of Common Pochard.  Only the occasional Great Crested Grebe noted but plenty of Little Grebes.  However, the dominant grebe on the water was the Black-necked Grebe, most now in full winter plumage, but I was unable to find the winter-plumaged Slavonian Grebe that had been seen by Peter Jones late last week.  A single juvenile Flamingo was feed in close tot he left of the hide and there was a plentiful supply of Moorhens to be seen.  Other birds on the water included both Black-headed and Yellow-legged Gulls.  To the edge on the far bank a couple of Black-winged Stilts were noted and then both Corn Bunting and Goldfinches flew into the trees behind me whilst a Sardinian Warbler flitted through the reeds.  Before departing, a single adult female Marsh Harrier started to quarter the reeds on the far side and to my right and no sooner was I back on the main road than I had a resting Buzzard on top of one of the now defunct telephone polls.

Approaching Fuente de Piedra it was apparent that, whilst there was till water in main laguna, most of the neighbouring ponds and damp area were now completely dry.  Even the laguneto at the rear of the visitors' Centre was hardly more than a joined-up lair of dark green ponds.  However, the main focus was on the every greatly reduced number of Flamingos to be seen.  Had the birds flown to pastures new (or should that be waters new)?  Whereas on my last visit the Flamingos could be counted in thousands, probably reaching 20,000 or more, now the birds would, probably, be easier to count in hundreds with a final total well short of 2,000.

A few ducks on the main water and the ponds at the back held a few Flamingos but a good-sized mixed flock of ducks, mainly Mallards and Shovelers but also a small number of Teal.  Moorhens were bust feeding and smaller birds included Sardinian Warbler, House Sparrows and Goldfinches.  Just the one Kestrel was recorded but I did find a couple of male Stonechats.

I spent a little time with the scope trying to locate any Stone Curlews in the field beyond the causeway, that with the newly-restored tower, and managed to find a single individual.  So, on the way back I walked across the above causeway for a closer look and finally managed to find a couple that were very well concealed on the ground amongst the sods (of earth!).  Walking back to the car I saw about thirty flying in low to the same field from the direction of the laguneto so parked my car just on the side track and had another look with the binoculars.  Yes, there they were So I was eventually able to get a few, hopefully reasonable, distant photographs of the local Stone Curlews.  At the moment the flock would appear to be about thirty to forty strong but, of course, there may be others in the neighbouring fields around the laguna.

Then it was home for a late lunch (again!) and a very pleasant surprise to find a Barn Swallow feeding alongside the road as I approached the Colmenar turning.  My local Thekla Larks were waiting to welcome me back on to the mountain, along with the local goat herd that I had to follow up the track. 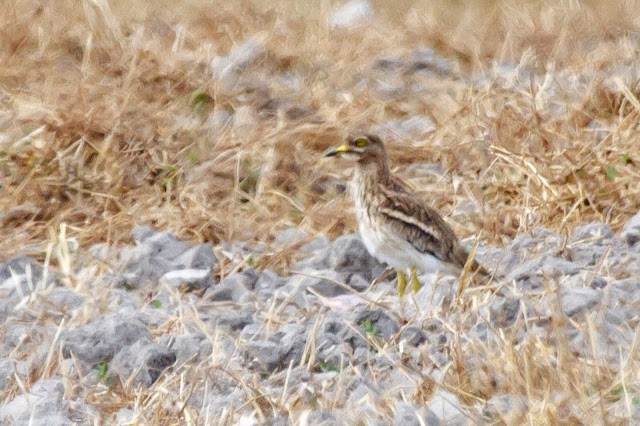 Check out the accompanying website at http://www.birdingaxarquia.weebly.com for the latest sightings, photographs and additional information.
Posted by Bob Wright - The Axarquia Birder at 09:22