How can both of these birds be Ruffs?

As reported yesterday, whilst at the Rio Velez I cam across a pair of grey waders feeding together in the shallow water and, at first glance given the marked difference in their respective sizes, immediately thought one Redshank and one Greenshank.  At that point I lifted my binoculars to take a closer look.

Certainly the larger bird had darker legs, almost a blue-grey reminiscent of Audouin's Gull, but the beak was all wrong; short like that of a plover.  So, time spent on this individual trying to establish what other large wader had dark legs despite the body markings which suggested a Ruff.

Having "sorted" the larger bird I then looked at the small individual, noticing that it was well-marked with a closed ring above the knuckle of the right leg and a coloured and lettered ring on the opposite leg.  Again, no sooner had I taken a closer look through the binoculars than I once more had to change my identification from a juvenile Redshank to a second Ruff; very obvious once I looked at the beak and the overall colouring.

But the question remains; why the marked difference in sizes between the two birds which wee feeding close together?  The smaller bird looked fine for a Ruff in size terms but the second was at least 25% larger - but with the same markings and bill size other than the darker legs.

So, the question is can anybody out there help me solve this conundrum.  Is it two Ruffs of marked size difference or am I missing something?   Please leave your comments or email me at: rcnwright@gmail.com.  (I really must get the new "Facebook" site dedicated to my blog/website up and running which would make this much easier for birders!) 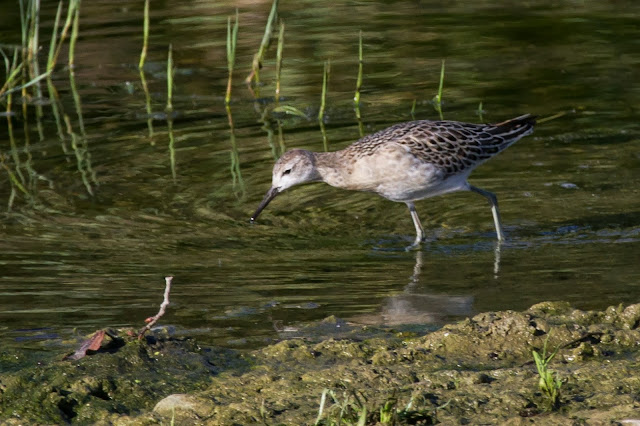 Check out the accompanying website at http://www.birdingaxarquia.weebly.com for the latest sightings, photographs and additional information.
Posted by Bob Wright - The Axarquia Birder at 01:37