It´s all happening at the Rio Velez!

Picked up an email from Mick Richardson this morning telling me about his visit to the Rio Velez yesterday (Thursday) morning where, in three hours, he managed to record 62 species.  As if the total was enough, the quality of the species was something else!  How's this for to add to your list for the morning?

2x Osprey, 1x Quail, 2x Bluethroats, 12+Yellow Wagtails, 3x Collared Pratincoles, 4x Penduline Tits and several Pied Flycatchers. Also attached were photographs of the Osprey and a Zitting Cisiticola and, judging form the quality, Mick's photographs using the new lens are getting better and better.  I shall have to improve my technique just to keep up with Mick.  Many thanks for the report and photos , Mick which I am sure readers will very much enjoy.


As a result of reading Mick's email, a slight change of plan for me.  Jenny and I were going down to Torre del Mar this morning once all the washing was on the line so I was "given permission" to wander the Rio Velez myself for an hour.  Greeted just under the bridge by a trio of Mallards and a couple of Shoveler I then made my way down stream towards the pumping station.  I had recognise the car in parked front of me so gave Steve a quick call to establish where exactly he was.  Turns out he was near the beach and had already seen and photographed the Osprey which had headed upstream over the road bridge.  Whilst he was in the same area he had also seen a pair of Collared Pratincoles disappear under the bridge and upstream.
Only a single pair of Ringed Plovers noticed on the way down along with another trio of Mallards, the usual good numbers of Moorhens and the Coots had returned, probably totalling up tot a score.  A Kestrel was resting on top of an electricity pylon and a number of Blackbirds were moving around.

Reaching the pump house I noticed a single Cattle Egret feeding with the quartet of tethered horses whilst another trio were following the ploughing tractor behind me.  On the river a number of Yellow-legged Gulls but nothing else other than the above Coots.  On the grasses in front a number of House Sparrows along with a few Serins, including a very yellow male, and then, surprise , surprise, a pair of Common Waxbills arrived in a nearby bush and continued to be very active.
At this point I looked behind me to see Steve and Elena Powell walking back from the beach, where they had seen both Cetti's and Reed Warbler, along with Dan Wilkinson and his wife.  In addition, Dan had found a Little Bittern in the reeds behind the beach.  After a natural break to exchange sightings and greetings, etc we all continued on our respective ways.

Other than more Yellow-legged Gulls and Coots on both the river and sea I started to make my way back to the pump house recording Cetti's Warbler.  The grassy slopes between here and the car then produced Stonechat and both Yellow (Iberian) and White Wagtails before spotting a trio of Ringed Plovers, not necessarily a complete addition to those previously seen.  A couple of Monk Parakeets passed over and a small number of Spotless Starlings was recorded.  Only the single Crested Lark to be seen along with a nearby Chiffchaff but it was lovely to find a male Pied Flycatcher just before my departure to collect Jenny.

In addition to the birds, the weather was still fine enough to produce a number of butterflies, including some vey small white species, and there were large blue dragonflies to be seen over the water, presumably Blue Emperors.  I based this identification, rather than Lesser Emperor (Anax parthenope) on the amount of yellow on the abdomen and the fact that, according to the Field Guide to the Dragonflies of Britain and Europe (Dijkstra), the abdomen was not as straight as that seen in the latter.  No doubt, somebody will correct me if I am wrong! 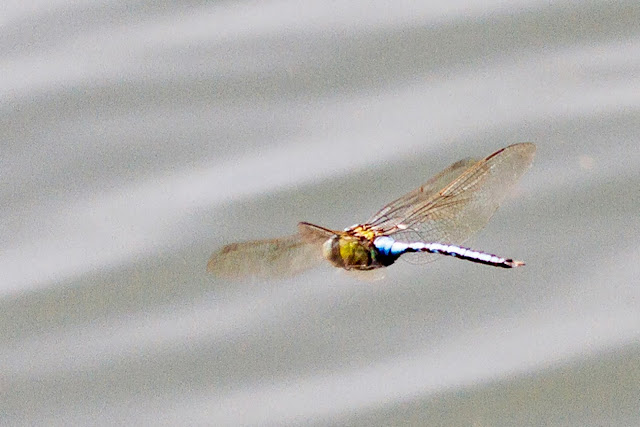 Posted by Bob Wright - The Axarquia Birder at 09:11