Rather longer than expected undertaking some maintenance in Velez de Benaudalla so just a bare sixty minutes at the Charca de Suarez reserve on the western outskirts of Motril as we made our way back to Casa Collado.  As we entered "Turtle Dove Alley" (all the Turtle Doves seem now to have departed for more southern climes) we were greeted by a single Moorhen in the drain and a watchful Kestrel.  Driving down the concrete alley there were lots of House Sparrows feeding on and near the road along with a small number of Serin.

Jenny off for a coffee at a local hotel as I walked round to the main hide, first encountering a number of male Blackbirds and then a single Spotted Flycatcher.  The first pool, Laguna del Taraje, held a few Mallards and Coots but little else seen until I reached the main Laguna de las Aneas.  I got the distinct impression that Coot numbers were very much down but still plenty to be seen along with the usual Moorhens.  A lot of Cormorants had arrive and a count of seventeen suggested that this might be a roosting site at the present time.  Only a handful of Little Egrets and just the single Cattle Egret along with a trio of Grey Herons.  Little Grebes had to be searched for and, eventually, a total of a score or more were counted.

Ducks consisted of mainly Mallards in the foreground but perseverance produced about a dozen Shovelers at the back of the water along with a pair of Teal.  However, pride of place must go to the single female Pintail which, whilst being relatively close to the main hide, was feeding in the shadow of a very low sun as the available light quickly receded.  The only other birds recorded on the water were a couple of dozen Black-headed Gulls. 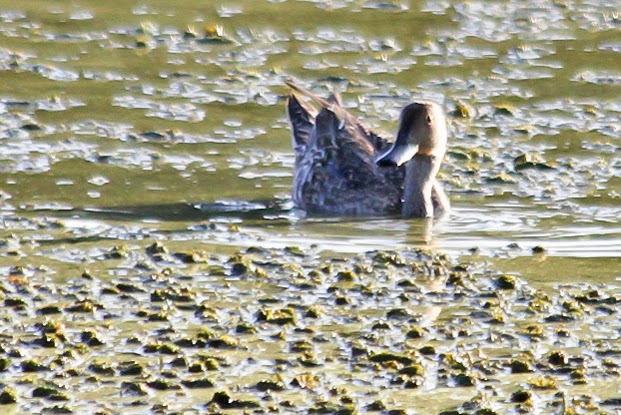 Whilst the walk to the neighbouring Laguna del Trebol produced nothing new, just a single Little Egret and Little Grebe, a handful of Moorhens and a dozen Coots, I did get out of the hide in time to see the female Marsh Harrier drift over the waters and away to the east.  Just a shame that the Pintail, as mentioned above, was not found until my return to the main hide by which time it was almost time to depart before closing and only limited light available.  On the other hand, whilst Mano prepared to lock up I did manage a quick thirty second visit to the Laguna del Lirio and there was my first Purple Swamphen casually wandering along the back of the water in the shade of the reeds.

Check out the accompanying website at http://www.birdingaxarquia.weebly.com for the latest sightings, photographs and additional information.
Posted by Bob Wright - The Axarquia Birder at 02:56