Up early and down to Puente don Manuel with Jenny to collect Eric Lyon and then on up to the pass at Ventas de Zafarraya to cross over into Granada Province and join up with the monthly field visit of the Andalucua Bird Society at the foot of the Sierra Loja.  Leaving Casa Collado there was a very thick mist with visibility down to less than one hundred metres so, at the time, we wondered what might possibly be in store for us as we started the initial climb up to the pass.   But have no fears; within a kilometre of the summit we suddenly broke through the mist into clear blue skies and lovely, warm sunshine.  Indeed, the rest of the day remained the same with hot temperatures, even on the Sierra Loja top. The latter half of the journey to Loja produced many Blackbirds plus Spotless Starlings and Azure-winged Magpie but not so strange as the quartet of Mallards walking along the road just before Zafarray itself.


Leaving the House Martins and House Sparrows behind at the service station we headed for the lower quarry for our first stop, but not before recording a trio of Mistle Thrushes, where we soon had both Wood Pigeon and Collared Doves, over-flying Goldfinches and a single Jay which very conveniently dropped into a tree top as I focused on the same object.  Then it was on up to the hidden quarry having parked the cars at the turning point so that we could walk the short track.  A number of Red-legged Partridges were seen along with more Blackbirds and the first of a number of Azure-winged Magpies.  Whilst the quarry produced both Black Wheatear and Black Redstart, the Eagle Owl was not to be seen, almost certainly as a direct result of a pair of climbers tackling the cliff face within twenty metres or so the owl's nesting cave.  Overhead there were regular sorties of Choughs and a constant stream of feeding House Martins accompanied by a good number of Barn Swallows and the occasional Red-rumped Swallow.   Next it was the turn of the Swifts to put in an appearance, mainly Pallid but a small number of the Common species.  On the opposite slopes a number of Dartford Warblers were recorded and then a single male Crossbill resting atop a small bush, what was he doing here away from the pine trees?


As we returned to the cars and started the drive up the mountain we had our first Kestrel of the day and then more Choughs along with a steady supply of Jackdaws.  A number of Woodchat Shrikes were seen during this first part of the drive.  A couple of stops along the way produced a number of Stonechats along with Thekla Larks and Rock Buntings and, once clear of the tree line, we were finally able to find Northern and Black-eared Wheatears.  A distant Blue Rock Thrush prepared us for many closer views at the top and a number of Crag Martins were feeding over the slopes below as a small party of Bee-eaters flew over, as did a Sparrowhawk.

Rather than stop to find the resident two pairs of Spectacled Warbler we pushed on to the grassy banks at the Charco de Negro pond.  Lots of water here but a lovely place to enjoy our picnic lunch.  On to the top and up past the old cave where we, naturally, found Rock Sparrows and more Crag Martins plus a number of beautiful male Blue Rock Thrushes.  Finally, our first Rock Thrush sitting on top of a low cliff; a female that was soon joined by the male.  A little later and we had another male Rock Thrush with his salmon chest glowing in the bright sunshine. 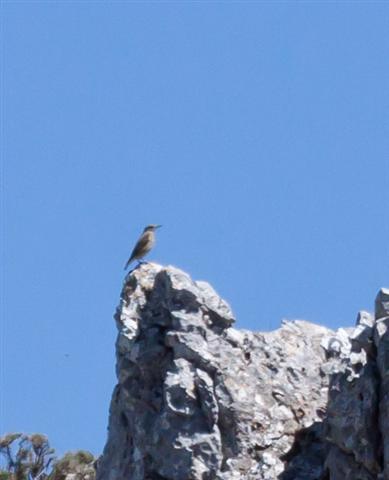 Mission accomplished so we started the descent stopping at the favoured site where we duly found the Spectacled Warbler along with more Northern and Black-eared Wheatears.  However, as we were so near and passing anyway, we called in once more at the hidden quarry and to our delight the climbers had gone.  All the usual birds present as we fixed the scope on the target cave but no bird.  Then, thinking I would try and focus on what looked like a feather at the edge of the nest site, the Eagle Owl walked though the view finder and took up station at the front of the ledge where it remained or the rest of our time at the site.  Certainly, the hard work was done in time for the second car that also had the same thought as ourselves so that they could, also, get some magnificent views of this lovely nocturnal raptor.  On the other hand, despite using a 400m lens, the approximate distance of about three hundred metres made taking a good photograph rather difficult, hence the record shot as illustrated.


All in all, a great day's birding where the group, as a whole, managed to record well over fifty species on the mountain.  For ourselves, rather than return home by the same route we took the motorway east and came home via Salar, passing a couple of Southern Grey Shrikes on the way, and the old, now closed road down to the back of Zafarraya; no problem if taken carefully.  More Chaffinches at the top of this road and, once at the bottom, we had Magpies and then both Calandra and Short-toed Larks.  To be expected, there were also numerous Corn Buntings on the wires and fences.

Check out the accompanying website at http://www.birdingaxarquia.weebly.com for the latest sightings, photographs and additional information.
Posted by Bob Wright - The Axarquia Birder at 23:56