Do Dunnocks breed in the Axarquia?

An interesting hour or so up at the Alcaucin lower picnic site this morning made more intriguing by the the return journey.  No sooner had  I left the track than just after the second bend as I, literally, crawled down the road in the hire car, I had a Dunnock feeding on the grass verge right in front of me.  No sooner seen and eye brows raised than a second bird was seen, presumably, picking up grit at the side of the road.  I was able to sop immediately, not so much a six-pence more a penny piece, and study the bird in the wing mirror.   Reversing slightly gave me a better view but there was no chance of actually getting out of the car, not least also because to the two 4 x 4s rapidly approaching a couple of bends away on this very narrow road.  Just as I was about to photograph the mirror image, naturally, the bird moved away and then the above cars were round the corner and almost inside my car.

Late April and Dunnocks still with us and as a pair.  Too late, surely, for migrating birds so the question, once again, is do Dunnocks breed in the Axarquia district?  Is it not sufficient for the annual winter visits to Steve and Elena Powell's garden up in Frigiliana?  Who next will see one or more of these shy, but very randy, little brown jobs? 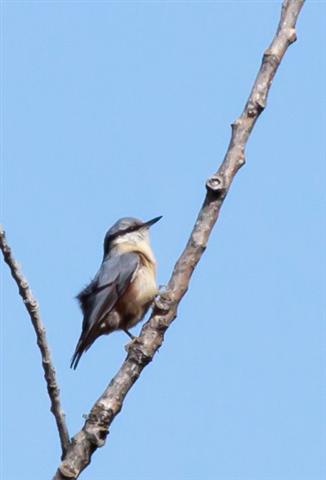 Back to the beginning; Stonechats on the way up and down along with Goldfinches but very little to be seen at the actual picnic site.  A lovely singing Nuthatch and plenty of Crossbills to be seen, mainly juveniles, along with Blackbird and Chaffinch.  A Green Woodpecker "yaffled" off in the distance and as I made my way down through the various picnic areas I had a quick view of a Short-toed Treecreeper along with a male Great Tit.  A few Serins, including a rather handsome male bird, were also recorded along with a single Coal Tit.  Amazing, only eleven species seen in the area and yet five were new for the month!


As already stated, the return drive down the mountain was noted for the Dunnocks, a Collared Dove on top of a wooden pole and then the arrival of the House Sparrows and Barn Swallows as soon as I reached human habitation.

Finally, a little furry rodent on the path alongside the watercourse above the picnic area.  I am not sure who was the more surprised.  I shall have to check it out but I can only presume that it was an Edible Mouse.  A lovely, clean and light "gingery-brown" in colour it sat upright, eating grass seeds I think, just like a miniature Hamster or Gerbil.  No sign of a tail as it was in short grass.  I slowly eased back shortening the lens from 4400 to 1oo and at the same time changing the focus form 6 to 3m to infinity.  But no, the little , furry animal had finally worked out that I should not have been there and slowly ambled under the nearby vegetation on the slope.  I wonder what it was?