Great birds in the Zafarraya area


At last the weather had changed and we had beautiful blue skies and warm, sunshine - just a shame about the accompanying wind!  Off early to meet up with Steve Kitchen from Watford at Puente don Manuel so that I could show him some of our mountain birds.  And in this we were not to be disappointed for, apartment from dipping on an almost guaranteed Crag martin , we saw just about everything else including some birds that had not even figured on the radar when we set off for our extended morning to Ventas de Zafarraya and the the hinterland to the north-west.

Arriving at the mirador so that we could walk the old railway line until the old ruin about 800 metres beyond the tunnel, we found it to be very cold with the opposite cliffs blocking out the sun and very windy; a good job we had extra layers to put on.  The Choughs were already in the air with plenty to be seen and soon after starting we had first a Dartford Warbler quickly followed by a single Rock Sparrow.  The Black Wheatears were not as numerous as usual but they were there to be seen along with a female Black Redstart.

Through the tunnel and we had a gorgeous male Black Redstart along with regular sightings of Choughs and then a distant Bonelli's Eagle hove into sight.  Wonderful!  Returning to the car we had a couple of Rock Buntings and a handful of Goldfinches before a Booted Eagle passed overhead.  Finally, at the car, a most handsome male Blue Rock Thrush arrived and posed on a rock just beyond the car park. 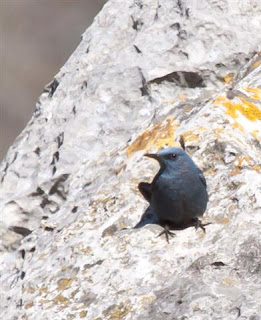 Next of to the "Muck Heap" passing the local House Sparrows and Spotless Starlings on the way, where we not only found a pair of Crested Larks and at least five Thekla Larks but also a small number of Short-toed Larks - all larking about as they say.  Whilst here a first year marsh harrier passed close overhead - what was he doing here unless on migration?

Passing through the "Magpie Woods" we had to wait till the very end before glimpsing a handful of Azure-winged Magpies skirting the tree tops along with a closer Blackbird.  A Wood Pigeon made a hasty departure.  But we were to see many more Azure-winged Magpies as we took the old Loja road and then completed the anti-clockwise circuit.  This route produced a number of Corn Buntings, lots of Azure-winged Magpies and even a few Barn Swallows.  However, a stop at the lower fields once more produced the hoped for Calandra Larks and, although low in numbers and well concealed, we did manage to get some good views.  During this stop we found our first Northern Wheatear and a single Red-legged Partridge but, even more exciting, one  and then a second Great Spotted Cuckoo as the pair flew back and over the car closely followed by a Common Cuckoo. 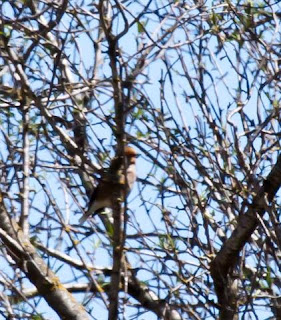 Just after turning off the main road a Firecrest flew into the neighbouring tree whilst, within minutes, we found a pair of Linnets on the other side of the road.  Continuing on , and almost round the circuit, we stopped to watch more Azure-winged Magpies and were delighted to find a resting Hawfinch, albeit the twigs prevented a good photograph.  Then, with more sightings of Northern Wheatears, it was on and through Alhama de Granada in order to take the usual route back to Ventas de Zafarraya and, whilst we did not find our Little Owls on this occasion, we id pick up both Mistle Thrush and Woodchat Shrike.


The final part of the journey brought us down the mountain and a stop to watch the Bonellis's Eagle that took off from a nearby pylon. Whilst here we also picked up House Martins and then a Collared Dove when back amongst the houses of Puente don Manue.  Finally, after saying goodbye to Steve, I drove up to Casa Collado passing a number of Serins as I approached Los Romanes and then, within minutes of returning home and emptying the car, a small flock of noisy Bee-eaters passed over the house.  Add on the Chaffinches I saw on the way down my mountain, it was a very respectable total of 37 species for the morning; a case of more quality rather than quantity.


Check out the accompanying website at http://www.birdingaxarquia.weebly.com for the latest sightings, photographs and additional information.
Posted by Bob Wright - The Axarquia Birder at 09:40