Eldest son, David over for five nights with Caroline and they were keen to join me on a little birding to see how our Spanish birds might differ form those regularly seen in their large, wooded garden.  Rain promised for the first two days so we manage to get a visit over to the Alhambra at Granada completed but, instead of rain, we had some lovely sunny weather.  Serious rain promised for their last two days and sun and probable rain for Saturday so it was an easy choice in selecting Good Friday where, at least, we had the promise of dry weather id some what cloudy.  And "good" it was in just about all aspects.  The Ventas de Zaffarya railway track was a little on the very cool side with a gusty wind behind us on the outward journey but thereafter the clouds cleared away and the day became quite warm with glorious sunshine and very little cloud.  Wonderful and just goes to show that you accept weather forecasts as sound advice but not necessarily a "God given" as they say.

The four of us, including brother-in-law Chris who had also arrive the same day, had no sooner driven round the corner form Casa Collado and we had a lovely Rock Bunting on the track in front of us.  Finding it in the nearby shrub also produced a Sardinian Warbler and these were quickly followed by a pair of Great Tits and yet another Thekla Lark and we had only travelled less than 500 metres.  Add on a number of Spotless Starlings and we were well on our way to "non-British" birds.

Greeted by a Collared Dove on arrival at the Ventas de Zafarraya mirador we were soon hearing the Chough calls and before long were seeing the birds in front of and over the usual nesting cliff face.  Great silhouettes as they flew over and then on up the track and through the tunnel picking up numerous Black Wheatears.  Once through the tunnel, we picked up a pair of Ravens followed by a male Blue Rock Thrush.  A single Blackbird made an appearance followed by a quartet of Rock Buntings.  Checking out the distant slopes I suddenly had a rather lovely male Montagu's Harrier slowly quartering the slopes until it disappeared from view below the track.  Returning to the cars we had but one single Crag Martin come out and fly round the tunnel.

However, very few birds were seen, but we did have a good sighting of a pair of Ibex watching us from the top of the cliffs, and we decided to head off towards the "Magpie Woods" in the hope of some flashing blue but we were to be disappointed.  We had our first Mistle Thrush and another Blackbird, not to mention House Sparrows as we drove through the growing fields, and so we continued westwards to try and locate some close views of Corn Buntings and lark.  In this we were to be successful.  A number of Corn Buntings on the wires and both Spotless Starlings and Crested Larks on the stony ground just beyond the last farm on the road towards the "broken" road leading to Loja.

Stopping to check out the fields for Calandra Larks, Caroline was the first to spot the many small flocks of little brown birds.  Finally, I manage to get my bins on the birds, they were so well camouflaged once on the ground, but I had managed to pick up a handful of Calandra Larks, also seen by the others, before locating many of Caroline's Short-toed Larks, no doubt recently arrived back from their winter holiday.  Whilst Caroline was also the first to find a (common) Magpie, a pair at the far side of the field, my bird of the day was a Black-eared Wheatear sitting in front of us at the side of the road; my first for the year.


Mission accomplished, the plan was to make our way back to Ventas de Zafarraya for a coffee (to be accompanied by a small party of Mistle Thrushes immediately outside the venta) and try out a little "off-roading" as we tackled the mountain track down through the Sierra Tejeda to Alcaucin, calling in at the picnic sites on the way.  But bonus after bonus, no sooner had we returned to the Magpie Woods that we had first a single Wood Pigeon and then a small flock of those rather handsome Azure-winged Magpies which gave very good sightings of both their coloured wings  and lovely head markings.

I thought I was joking when I said "off-roading" knowing that at the top end of the track there was a short section with deep ruts that we would have to carefully navigate by either driving close to the edge or straddling the ruts themselves.  What I did not expect to find was that heavy vehicles had returned and churned up another section into a mud hole with deep ruts before we even reached the "promised" land. To continue or turn back, that was the question.  We had only added Goldfinches to the day;'s total and their seemed to be a very narrow width of unused grass between the track and ditch which might accept the off-side wheels so, placing the car into locked four-wheel drive the decision was taken to push on.  (Hopefully not literally as I dread to think how deep the mud might have been and we were all wearing trainers!)  Hairy, scary but a successful navigation both through mud and over the ruts to reveal a pair of Booted Eagles above us.

I think the last time until further notice that I will want/ be able to complete the full track but, soon after, we were at the top picnic site.  Second disappointment, for us, the masses had arrived for eater week-end and were obviously not wanting to camp at the lower site.  However, apart from a few Chaffinches and more Serins we did manage to locate a handful of Crossbills so that we could all get good views, albeit the sun produced more of a silhouette than a good colour identification.  Next it was down for a quick check  of the lower picnic site but this was really busy.  We simply stayed long enough to find at least three Nuthatches before continuing on down and back to Casa Collado.

John and Jenny might have rushed home to avid the arriving rain whereas we were probably trying to get out of the heat!  Greenfinches driving back up the track and then David had a go at capturing a distant Stonechat to take our final tally for the day to a not-too disappointing 30 species. 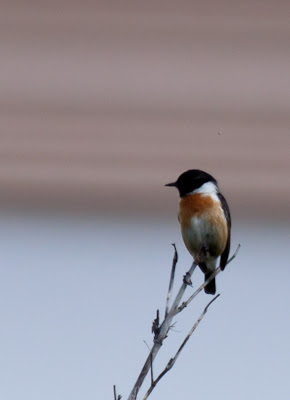 Check out the accompanying website at http://www.birdingaxarquia.weebly.com for the latest sightings, photographs and additional information.
Posted by Bob Wright - The Axarquia Birder at 05:38