After a week of non-stop rain and birding restricted to observing "through the window" it was good to wake up and see a dry morning with beautiful warm sunshine and not a cloud in the sky.  Jenny had already taken the grandchildren off to the Sierra Nevada and the ski slopes so it was up and out of the house to find some birds at both Laguna Dulce and Fuente de Piedra.  I took this specific route so that I could check out the flooded fields in the Colonia Santa Ana area where, previously, hundred of gulls, herons and waders seemed to congregate.  But first, down the mountain passing Thekla Lark, House Sparrow and Black Redstart and , as I joined the main road above Lake Vinuela, a pair of courting Ravens on and above the nearby electricity pylon.

Colonia Santa Ana did indeed have its regular fields once more in a state of flood but, as far as I could see, only gulls with a few Yellow-legged in with the hundreds of Black-headed Gulls.  The road off to the left proved a great disappointment in that I hoped it would take behind and nearer the birds so that I could actually stop the car and use the telescope.  No luck here as it veered away once round the corner.  However, I did manage to see some lovely Serins, a pair of Redshank and single Little Egret and Mallard on nearby grass ponds.

Laguna Dulce was reached by 10 o'clock and what a change from my last visit.  Gone were the thousands (it seemed) of Coots albeit there must still have been about a hundred or more spread round the water and its edges.  Duck numbers were also down with the main species appearing to be Common Pochard; these, too, were spread across the laguna in small groups.  Immediately in front of me a couple of Black-necked Grebes gradually moulting into their summer plumage and another pair displaying off to the left.  The same could be said for a pair of Great Crested Grebes with a total five counted on the water.  As for Little Grebe, I had to wait until just before departure to find the first of the few bids on the water.

Overall, there was a good range of ducks with the usual Mallards and Shovelers plus a tight flock of thirty-seven White-headed Ducks.  Meanwhile, the Black-headed Gulls rested towards the back and on the far bank a small number of Flamingos were noted.  The first of a few Lapwings passed across and then the appearance of a splendid female Marsh Harrier.  Next an arriving Grey Heron and a trio of Red-crested Pochard to the right at the very back.  A single Moorhen was recorded and then I made my way round to the main lagoon at Fuente de Piedra without seeing a single hirundine over the water.

Taking, for a change, the anti-clockwise route I managed to pick up more Black Redstarts and Serins plus both Corn Bunting, Goldfinch and a rather handsome pair of Linnets before reaching the main car park at Fuente de Piedra.  The entrance pond (flooded field) on the left held both Shoveler and Teal in addition to Coots and, overhead, a number of Barn Swallows were feeding.

Next off across the boardwalk to check this area and meet up with Eric and Pat Lyon who had arrived at about the same time as I was arriving at Laguna Dulce.  In my absence they had already managed to record a small flock of Ruff, Robin, Water Pipit and a selection of Yellow Wagtails not to mention a pair of Avocets.  However, as confirmed by a Swedish couple I met as I reached the bridge, they had also seen a number of small parties of Cranes making their way out of the area towards the west.  The Cranes winter here and tend to leave by the end of March or, if we are lucky, might still be found during the first week of March.  Did this mean that I had arrived too late and would have to go without once more seeing the graceful birds until next October?  I must admit, at the time I feared so.


Meanwhile, I had Black-winged Stilts for company along with a Kestrel and a number of Cattle Egrets.  There were numerous Chiffchaffs feeding in the reed edges and shrubs whilst a Crested Lark put in an appearance.  With Pat and Eric we then mad our way round the path below the Information Centre and on to the Laguneta at the rear.  lots of Shoveler everywhere on the main water and pool to the right plus the usual Coots and Moorhens but still good to also record both Mallard and Teal.   The Flamingos, as ever, looked gorgeous n the summer plumage and especially when in flight so that the colours were enhanced by the black feathers.  However, I very much got the impression that the overall numbers had somewhat depleted and I wonder if this is a result of there being too much water to ensure successful breeding.  A Sardinian Warbler along with a few House Sparrows were active in front of us and so the the laguneta.

Again, lots of water and very little habitat for wades.  More Shovelers, Teal and Common Pochards but also a few Gadwall.  Little Grebes were in better supply but not a lot more of anything else unless you include both Rock and Collared Dove.  So we made our departure and headed off to the Mirador Vicaria to see if the arriving wagtails might be on the grassy fields in this area.  In the hope that I might find the Avocets on the flooded fields at the back of the reserve just after taking the main road (I did with three recorded), Eric and Pat drove straight on the mirador and managed to watch a low-flying female Marsh Harrier flush at least twenty Snipe up from near the road.  Whilst they were driving not only were the Avocets discovered but also a small number of Shelduck along with many more of the ducks already recorded.


The wagtails were where we hoped to find them.  Not in large numbers but amongst the half-dozen or so White Wagtails we were able to find a couple of "Blue-headed Wagtails," the Iberian sub-species of Yellow Wagtail Motacilla Flava Iberiae feeding alongside a single Meadow Pipit.  However, more exciting, was the single Italian sub-species, Yellow Wagtail Motacilla Flava cinereocapilla.  From here it was on to the Mirador Cantarranas and he last hope if any Cranes were still to be found in the area.  During this short drive none were to be found on their usual feeding fields but I did manage to see both Jackdaws and a single Wood Pigeon along with more Crested Larks, Corn Buntings and another pair of Linnets.

The Mirador turned up trumps with not only further small departing groups of Cranes but a main flock of about sixty individuals still feeding on the grass to the left of the nearby pool.  Again, more Shoveler, Teal, Coots and at least one Great Crested Grebe on the water itself whilst overhead a handful of Marsh Harriers quartered the reed bed including a rather magnificent adult male bird.  No sooner had we enjoyed this experience than the harriers were joined by a single female Hen Harrier and a couple of Common Buzzards were spotted not so far off.  Again, whilst there were hundreds of Flamingos at this end of the water the impression was till that numbers were seriously lower than last month.

So it was back to the Laguna Dulce for (me) a quick look before driving on to the Campillos lagunas of Redonda and Capacete to see if the Ferruginous Duck was still about.  At the Dulce a Green Sandpiper was recorded with a very close Corn Bunting and as I moved off to Redonda Eric managed to find a flighty Purple Swamphen in the reeds below the hide to the left.  Both the following waters were very disappointing, probably as a result of being too full.  More Black-necked and Little Grebes but, perhaps, the best was on a flooded field just before the Redonda when a small number of Little Egrets were seen and, at the back of the water, nine feedig Black-tailed Godwits.  So ended my day as I made my way back home with a final total for the day of 51 species. 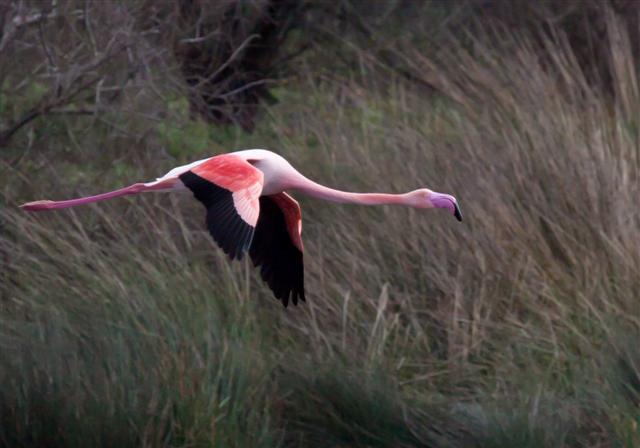 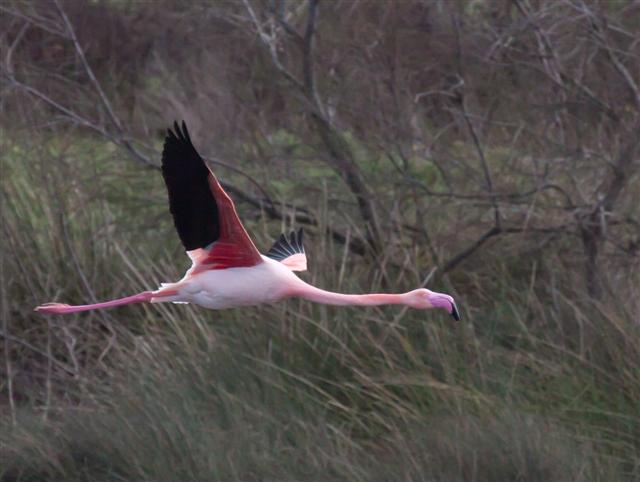 
Check out the accompanying website at http://www.birdingaxarquia.weebly.com for the latest sightings, photographs and additional information.
Posted by Bob Wright - The Axarquia Birder at 00:58