Needed to be at the airport for 3 pm to collect brother-in-law so left early so that I could spend a few hours at the Guadalhorce in Malaga.  Greeted by Collared Doves when I arrived at 10.30 and then a trio of Mallards flew over the western arm followed by the first of a number of Cormorants that are still at the site.  Naturally, there were Spotless Starlings to be seen and a sole Woodchat Shrike as I made my way to the Laguna Escondida to check out the  small water.  On the whole very quiet with just a handful of White-headed Ducks, a couple of Shovelers hiding at the far end and a few Barn Swallows feeding over the water.  But a Hoopoe did fly past to give a little variety.

Leaving the hide and making my way to the main hide at the Laguna Grande I could see a Booted Eagle resting on the "feeding post" which, very conveniently, remained on post until I arrived at the main hide and could take some distant photographs.  The main water itself held a good number of White-headed Ducks, they are certainly pouring in now, along with both Little and displaying Black-necked Grebes.  Lots of Black-winged Stilts and about a score of Cormorants whilst on the island at the far right back a trio of Grey Herons, a Little Egret and a Spoonbill were either resting or feeding.  To my left and in front more Shovelers, a Pochard, a small number of Coots and the occasional Moorhen.  In the nearby bushes I had a number of both Serins and Goldfinches and then Andy Paterson and his sister Gay arrived, having already checked out the eastern arm of the river and walked the beach.  With them they brought news of a first Northern Wheatear so I immediately took my leave and walked down to the beach path to check for myself.  Yes, found the bird within a couple of metres where Andy had seen the Wheatear and then a quick look at the beach produced a pair of Black-headed Gulls resting on the sand before heading back to the hide.  The Wheatear was now exactly where Andy had described but, much to his chagrin, had been joined by two others.  Meanwhile, a pair of Greenfinches were recorded along with a male Blackcap immediately in front of the hide and then a single, swimming Avocet.

Time for Andy and gay to depart so I walked back to the car with them, recording House Martins on the way, to exchange the camera for my scope in readiness to return to the eastern arm and the wader pools.

Returning, I had the usual Rock Doves under the bridge and a very close Zitting Cisticola just after crossing the footbridge.  Approaching the Laguna Casillas and its hide a quartet of squawking Monk Parakeets dashed over whilst a handful of Linnets were feeding in a bush opposite the hide itself.  From the hide it was, again, very obvious that the White-headed Ducks had returned with a vengeance but there were also a couple of Pochards and Mallard.  A pair of Gadwall and it was time to move  on to the Wader Pool.

Approaching the Wader Pool I came across my Danish friend Claus Pedersen who was busy trying to locate Bluehroats between the two pools but did join me at the hide from where we could see a single Avocet and fifty-five Black-winged Stilts.  Having already had at least thirty on the Laginua Grande and a further seventy-five were to be counted on the Rio Viejo, it was most apparent that a serious movement of these birds was currently underway.  The, from south to north, the appearance of four Purple Herons heading inland up river.  At this point Eric and Pat Lyon suddenly appeared in front of us and they, too, were on airport duty but having just deposited their passenger. Again, more news of what might be seen if we ventured forth to the beach.


A couple of Crested Larks were seen to the left and, apart from all the Black-winged Stilts, there was also another Avocet (the third), a pair of Redshank and a single Ruff to be seen on the Rio Viejo.  Behind these birds we also found two pairs of Teal. 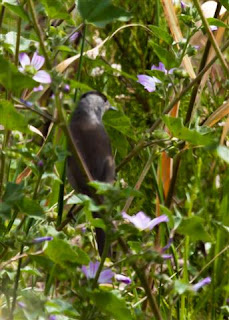 At the Sea Watch we picked up a good-sized mixed flock of Gulls, mainly Yellow-legged but also a number of Lesser Black-backed Gulls.  To the right a small group of Mediterranean Gulls were also identified with a couple if full black headgear.  There must have been at least thirty Common Scoters split into two distinct rafts and then a very hungry/greedy Great Skua arrived and put the whole flock into the sky whilst it selected its victim and harried it all around the bay in front of us until it gave up whatever ii had caught for lunch.   From the Sea Watch we also saw the Blue Rock Thrush that Claus had discovered last week, and on the same post near the river.  It certainly sounds like a lost soul to me!

Returning to the previous hides I added a swimming Purple Swamphen at the first and by now the air was alive with feeding Barn Swallows and House Martins as the skies cleared the temperature rose and rose to give a very warm session.  Nearing the footbridge a couple of White Wagtails were on the footpath and then, at the car, the first Kestrel of the day along with a number of House Sparrows. 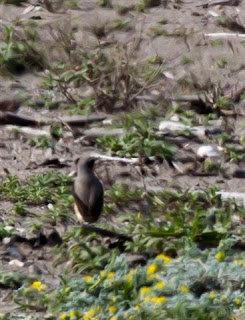 Check out the accompanying website at http://www.birdingaxarquia.weebly.com for the latest sightings, photographs and additional information.
Posted by Bob Wright - The Axarquia Birder at 11:49