Osprey and Peregrine but no Short-eared Owl 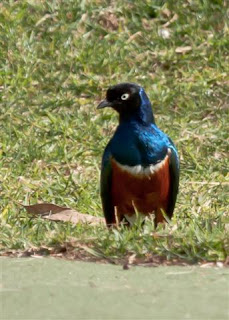 A beautiful warm and sunny day with clear blue skies and not a breath of wind in the air.  What better way to spend the day, therefore, than visiting the Gualdalhorce reserve in Malaga.  Arriving just after 10 the day was to be split into two sessions; the morning complete with scope and camera checking out all the pools and sea and after a little more than an hour's break to get something to eat in San Julian I returned via a short stop at the Parador Golf (and what a surprise that turned out to be!) by mid-afternoon to concentrate on camera work in the hope that the wintering Short-eared Owls might put in an appearance.  They did not even though I waited until well after 5.30 before setting off for home.

The morning session started with a welcome from a gorgeous male Black Redstart and a small charm of Goldfinches.  The odd Rock Dove was still present below the motorway bridge but, otherwise, the western river was deserted.  So, on to the eastern arm and the Laguna Casillas where I found a handful of White-headed Ducks, a few Coots, Mallards and a pair of Little Grebe.  Before departing I also managed to locate a pair of Teal and a few Gadwall came out to play along with the first of the Black-winged Stilts.  Behind me, a Zitting Cisticola was busy knocking five-bells out of a seed-head.


Moving on down to the Wader Pool I had House Sparrows and Chiffchaffs in the neighbouring bushes and the regular movement of Cormorants between the reserve and their various feeding stations.  The pool itself held a good number of Teal plus a single male Shoveler along with a pair of Gadwall.  Another pair of Little Grebe and about a dozen Black-winged Stilts added to the score.  Waders also included a single Redshank and Greenshank plus a couple of Common Sandpipers and a single Green Sandpiper.  Whilst looking at the Spotless Starlings in the top of the trees at the back of Laguna Grande I noticed the resting Booted Eagle and, returning to the Wader Pool picked up a small movement to my left.  Not this time more Ringed Plovers, the most common wader present, but a Bluethroat looking for food.  And to the other side of the hide a Robin for comparison and a Serin behind me.  Meanwhile, the Booted Eagle had take to the skies and at one point there was a trio of these lovely birds in the same view.  Finally, a single Snipe was spotted and a quartet of screaming Monk Parakeets passed over the hide before I started the walk down to the Sea Watch.


The walk to the Sea Watch produces both Crested Larks and Stonechats and on the old river, Rio Viejo, were a number of Black-winged Stilts but mainly Ringed Plovers and a few Kentish Plovers.  Also present were a g]handful of both Sanderlings and Dunlins.  From the Sea Watch therer were a couple of rafts of gulls to be seen, mainly Yellow-legged but also a number of Black-headed Gulls.  However, just beyond the main group was a closely packed group of nine Common Scoter and, before leaving, I also managed to sea a couple of Black-necked Grebes.  On the beach in front of me a lone White Wagtail worked the edges in search of food.

The return walk to the above hides produced first a handful of Meadow Pipits and then another Bluethroat.  In addition to more Stonechats a lone Southern Grey Shrike played the role of sentinel overlooking both water and grass.  Finally, just when I thought I was only to see the one raptor this morning, the wintering Osprey appeared and moved slowly up river.

Then it was on to the Laguna Escondida which produced more White-headd Ducks, indeed there were birds on all waters other than the Wader Pool totalling in number about a dozen males, along with a number of Moorhens and the a Purple Swapmphen paddled across the back of the water before disappearing into the far channel.  In addition to the numerous terrapins that were sunbathing on every available surface, Chiffchaffs moved freely about the trees and shrubs whilst the Cormorants continued there everlasting wanderings back and forth from the main pool.


The main pool, Laguna Grande, itself was rather quiet other than the thirty plus Cormorants present along with a couple of Little Grebes and a single Heron.  So, time for a break and as I made my way back towards the footbridge I had first a female Blackbird and finally a Little Egret.  In the distance I could hear both Collared Doves and yet more Monk Parakeets.


Returning to the Guadalhorce afetr lunch I called first at the Parador and had no sooner entered than I was looking at a number of Collared Doves, Spotless Starlings and Monk Parakeets.  Then a pair of very obliging Hoopoes fed close by as I took numerous photographs.  Just when I was thinking about whether or not the Splendid Starling was still present I suddenly saw the bird.  Almost tame, the starling was happy to wander around the area close to the kiosk giving good photogaphic opportunities.

Back at the Guadalhorce I had a close view of a Cetti's Warbler as I made my way towards the Laguna Grande.  The Booted Eagle had departed but now present was a Buzzard in the same tree and two trees to the right a splendid Peregrine Falcon.  A pair of Black-necked Grebes had arrived plus a single Snipe immediately below the hide along with a couple of White Wagtails.  On the main water a number of Shoveler had appeared plus a couple of Herons and the Cormorants now totalled in excess of forty.  Out towards the sea a large number of Lesser Black-backed Gulls were making their way east.


With still an hour to spare before the owls were likely to put in an appearance I decided to spend the time at the Laguna Escondida where at least I could find some shelter from the blazing sun burning my back.  I had, at last, a Kestrel in front of me as I made my way round to a very quiet laguna with now only the occasional Moorhen and the odd White-headed Duck but the, out of the reeds if not the blue, a Water Rail flew out from below me at a low level with steady flight, looking more like a chicken dresses as a Snipe, to land and immediately disappear into the thick undergrowth.  If I had looked away for a split second I would have missed the bird.


And so it was time to take up my watch station for the appearance of the Short-eared Owls.  Chiffchaffs, Stonechats and even Sardinian Warblers but no owls.  So, finally, with a heavy heart I admitted defeat and started off back to the car to make my way home.  No doubt, as I drove over the western channel the Short-eared Owls smiled to themselves and decided that, perhaps, they were hungry and would appear after all!


So you see, there may not have been any Short-eared Owls to be seen but I did record five raptor species excluding the Southern Grey Shrike, a range of waders even if somewhat small in numbers and a brief view of a flying Water Rail in the day's tally of 56 species.

Check out the accompanying website at http://www.birdingaxarquia.weebly.com for the latest sightings, photographs and additional information.
Posted by Bob Wright - The Axarquia Birder at 13:55