Very windy and quite cloudy as I set out for the monthly visit of the Axarquia Bird Group visit to the Guadalhorce in Malaga.  By the time we started the wind had somewhat abated, the cloud was breaking up and the promise of a warmer day was in the offer as the sun rose higher in the sky.  Indeed, by mid-afternoon the clouds had just about all gone, the breeze had abated and the sun shone down on a very warm day.  Excellent birding with over fifty species recorded before I finally headed off for home.  For this first meeting of 2013 we had a splendid turn out of thirteen including Eric and Pat Lyon, Malcolm and Susan Austin, John and Jenny Wainwright, Patrick Raines, Bryan Stapley, Gerry Collins, Lesley Laver, Louise Gray, Ellie Wallbank and myself.  Also a pleasure, Andy Paterson was able to drop down from Torremolinos and see us on our way as he returned for more legal work and the continuation of trying to finally settle estate matters.  Andy also brought news of a new publication by neighbour and friend, Ron Appleby, whose book on the study of Honey Buzzards in Yorkshire should interest many.  (If so, get in touch with Andy as shall I.)


Back to birding.  We were greeted by a light morph Booted Eagle and numerous Cormorants, a Moorhen and a couple of Coots on the (western) river plus a Little Egret or two.  Straight on to the Laguna Casillas where we found a small number of Teal, Mallard, Little Grebe and, eventually, a handfull of Pochards.  A very tame female Black Redstart joined us on the path and the occasional Goldfinch flew past along with a Blackbird.


Approaching the Wader Pool a Zitting Cisticola sat on top of a fence post and then, at the water, we had further views of the juvenile Flamingos plus more Teal, a number of Gadwall and more Little Grebes.  Both Green and Common Sandpipers were present and then we found three Greenshanks and a single Redshank.  Apart from a dozen plus Black-winged Stilts we also had a handful of Shovelers and the bushes in front held a score of Greenfinches.  Both Black-headed Gulls and Spotless Starlings flew over and then, at the back of the pool, a low-flying Marsh Harrier.


The walk down to the Sea Watch produced another Booted Eagle plus Buzzard along with a number of Meadow Pipits and a couple of Robins.  Monk Parakeets regular passed overhead accompanied by their raucous calling and hen more Black Redstarts and a few Stonechats and White Wagtails.  Out at sea in addition to a small number of Black-headed Gulls we had the occasional Lesser Black-backed Gull and more than a score of Common Scoters.  At least six gannets were fairly close to shore as they went about their search for a fishy lunch.  We even had a single Black-necked Grebe out on the open water and a Grey Heron lazily flapped its way ashore.  No sooner had we started on or return walk than we had, first , at least a quartet of Crested Larks and then a rather lovely Bluethroat.  Naturally, there were also very many feeding Chiffchaffs and then a trio of House Sparrows paid a short visit to the beach area.

Between here and the Laguna Escondida we then had a couple of Kestrels, calling Cetti's Warblers, another Sardinian Warbler, Serin and Blackbird.  The water itself held very few birds and nothing new.  On to spend some time at the  Laguna Grande where there were numerous Cormorants and a good number of Herons.  A couple of Little Egrets and a distant Cattle Egret along with the resting Buzzard at the back of the water. On the water, a couple of Black-necked Grebes, Coots, Pochards and Mallards plus, eventually found, a single female White-headed Duck at the very back of the water.  More Chiffchaffs and White Wagtails and time to split up and go our various ways.  For some this meant the journey home or shopping whilst a half-dozen of us took advantage of a Menu del Dia in neighbouring San Julian.  Interestingly, John and Jenny remained at the hide as the rest of us departed and were greeted by the arrival of a low-flying Buzzard which put up the Herons and Egrets to the left of the water.  Surprise, surprise, Pat was right.  One of the skulking Cattle Egrets hiding behind the reeds was indeed a Great White Egret; so yet another specie to add to the day's tally.


For me, an ulterior motive as I intended to check out the Parador Golf Hotel and then back to the reserve in the hope of finding the wintering quartet of Short-eared Owls that have been present for the past two months.  The first objective proved unsuccessful but I was back at the Guadalhorce by about 3.45 and came across John and Jenny Wainwright with the same task in mind.  A check first of all at the mouth of the western canal produced nothing so on to the main reserve and across the bridge with yet more Black Redstarts, Stonechats and Coots.  Also Little Egrets, Rock Doves and, of course, the constant movement of Cormorants moving in and out of the reserve.

Not yet 4.30 as we walked along the main track towards Laguna Grande and John found a single Short-eared Owl resting on a small, bare tree not so far away from the path.  After a considerable time watching the bird it took to the air, probably as a result of the second individual that passed close by.  Finally, a third individual joined in the search for food and the next thirty of minutes was spent by the three of us watching these fabulous birds.  What a privilege.  Deciding to take a last look at the Laguna Grande having now recorded the target species, we found the final member of the Short-eared Owl quartet on the other side of the track; yet more time watching this lovey bird.


The laguna itself held a distant Buzzard and a Marsh Harrier, probably the individual we saw fly over us during this last walk, along with scores of Cormorants and very many Herons and Little Grebes.  The Black-necked Grebes were much closer to the hide as were the Gadwalls, Mallards and Shovelers.  In addition to the Coots, a pair of juvenile Flamingos and many Chiffchaff, we also found a Snipe below the hide.


Having completed our check, it was back to the "Owl Field" to watch the lovely Short-eared Owls and we were not to be disappointed.  For over another forty minutes we watched the bird as for, probably, the fifth or sixth time we put off our departure.  We even had a Hoopoe fly past the owls; obviously too big for supper!  Eventually, reaching the footbridge, we were met by a returning Ellie who had not seen the bird so yet another twenty minutes as we, too, watched again and took more photographs, albeit the light was now rapidly deteriorating.  As we, finally, set off for home a pair of the Short-eared Owls were still very active and showing well.  What an incredible and pleasing way to end a day's birding with a final tally of 52 species. 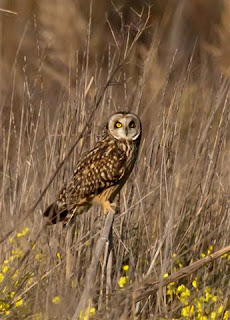 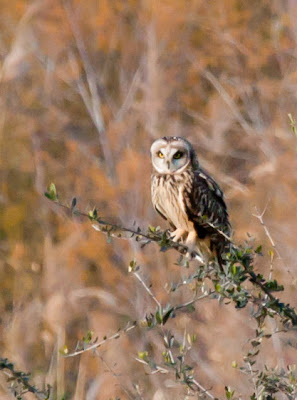 
Check out the accompanying website at http://www.birdingaxarquia.weebly.com for the latest sightings, photographs and additional information.
Posted by Bob Wright - The Axarquia Birder at 11:48