More Cranes and a White Stork

Sunny but very, very windy and cold with it as with Graham and Sue Knight we visited Laguna Dulce followed by a relatively short stop at Fuente de Piedra.  The outward journey recorded Serin, Goldfinch and Blackbird before coming across the flooded fields at Colonia Santa Anna where there were scores, if not hundreds of Black-headed and Yellow-legged Gulls with the odd Lesser Black-backed Gull thrown in for good measure.  Add on a number of Lapwing and Black-winged Stilts and we were read for the Dulce and whatever wind it might throw at us.  And it did; right in our faces making it almost impossible to look over the water.  However, the big shock of the day was to have a single White Stork leisurely sail along side us as we approached the site; what was this bird doing here at this time of the year?

The water was very rough but it was easy to pick out the Coots and a large party of Flamingos hunkered down on the far side.  Lots of gulls resting towards the far side and then there were the ducks, mainly Pochard and Shoveler but also Mallard and Gadwall.  Even better, we recorded at least three male and one female Tufted Duck still present but no sign of either White-headed Duck or Red-crested Pochard on this occasion.  A good number of both Little and Black-necked Grebes plus the occasional Great Crested Grebe.

The far side produced a single adult female Marsh Harrier and a few Crag Martins flew over the water.  Better yet, the first Barn Swallow of the year with a couple feeding over the reeds to the right of the hide.  Meanwhile, at the far right amid the small flock of Lapwing we suddenly had at least 150 Golden Plover take to the air.

In the hope that we might get a clearer view of the plovers we drove round to the back of the laguna where, instead, we picked up Crested Lark, Cattle Egret, Whuite Wagtail and over a dozen Jackdaws.  Then it was a handful of House Sparrows and a few more Black-winged Stilts before a gorgeous Marsh Harrier rose not too far away in front of us.

On to Fuente de Piedra via the Mirador de Cantarranas passing a Kestrel atop a pylon but not before a stop at the far (shallow) end of the laguna where the Flamingos rested by their thousand.  Amongst all the nearby Shovelers and a few Mallards we also managed to pick out a couple of Shelduck with another quartering Marsh Harrier and a lone Raven going about his daily business looking for something to nibble on.  The Cranes themselves became visible as we approached the entrance to the car park and, having taken a quick look for photographic reference, we may out way to the viewing point. Loads more Flamingos and a lovely pair of Marsh Harriers including a magnificent male bird plus a pair of Purple Swamphens.  However, another first for the year, our first House Martins with at least a dozen feeding high above the nearby water.  In front of us a true pair of Black Redstarts made sure that they were noticed.


Having eased down the road so that we could photograph the Cranes from the car we then moved on and recorded both Corn Bunting and Stonechat before reaching the entrance to the Fuente de Piedra lagoons.  The flooded field to the left of the entrance road held a number of Coots, Black-winged Stilts, Shoveler and Mallard along with the occasional Chiffchaff and when we looked back at this water from the height of the top car park we were also ab;e to pick out a solitary Ruff  and a departing pair of Pintails.


The laguneta held a small number of ducks but at least twenty Little Grebes (must have been the annual convention!) and a lone Snipe whereas the pool to the right of the Visitors Centre, seen from above, held Moorhens and we even managed to find a single Black-tailed Godwit.  But still no Avocets to be seen.  Finally, as we left the reserve, we had a Buzzard bust feeding whilst perched atop a pylon in the field opposite the site.  Considering the very windy conditions, a final tally of 46 species was quite reasonable for the extended morning. 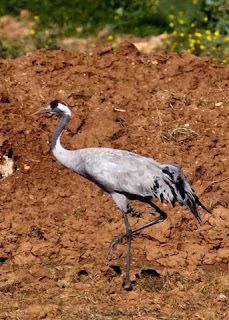 Check out the accompanying website at http://www.birdingaxarquia.weebly.com for the latest sightings, photographs and additional information.
Posted by Bob Wright - The Axarquia Birder at 10:35