Nearing the end of my present stay in Spain so an early morning visit to the Rio Velez in Torre del Mar for an hour at 9 to say a fond farewell and at least there was still water in the newly-created lagoon.  Lovely dry and sunny weather and able to see a good selection of birds for driving back to Motril to sort out bits and pieces before closing up.

Good to see lots of activity with many Barn Swallows and a couple of juvenile Goldfinch before the appearance of both Spotless Starlings and House Martins.   A Blackbird flew across the track and Nightingales were calling from the dry river bed below as a Spotted Flycatcher watched me from its perch on the nearby fence.

Moving slowly down the track I noticed the many House Sparrows and found a male Kestrel "hiding" at the top of a pylon.  A male Chaffinch was resting within a metre and then it was tm e to stop and checkout the first sight of water in what was left of the rapidly receding river. A trio of Black-winged Stilts, a single Mallard and a Little Ringed Plover. 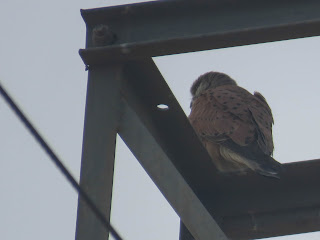 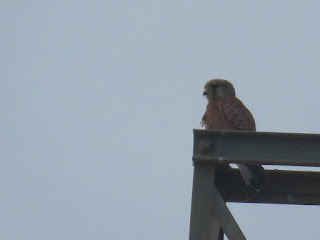 On down to the hide and much quieter than my last visit.  No shortage of Barn Swallows, House Martins and Pallid Swifts overhead and drinking the water on the wing.  To my right another Little Ringed Plover and a couple of Black-winged Stilts working the far bank.  To my far left a resting mixed flock of mainly Audouin's and a few Yellow-legged Gulls.  Nearby, both Moorhen and a couple of Purple Swamphen.  A trio of Monk Parakeets flew over and then the appearance of a small number if Common Swifts. 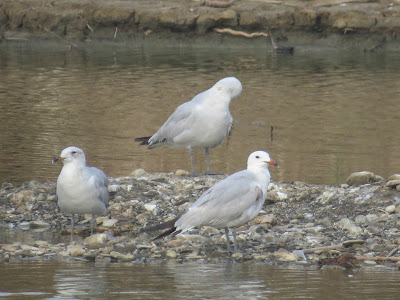 The walk along the beach to check the lagoon at the end of the river produced another three Purple Swamphen and fifty Mallards including two clutches of 10 and 8 ducklings.  Starting my walk back  m along the far bank I observed a couple of Crested Lark and the first of the Reed Warblers, another Nightingale plus a good number of Collared Doves along the way.  A handful of Goldfinches and then both Wood Pigeon and Rock Doves before reaching the car and departure.

For the latest news follow the Axarquia Birds and Wildlife Facebook page for more photos and comments and the opportunity to share with the wider birding world.
Posted by Bob Wright - The Axarquia Birder at 01:15