Setting off early I drove to the Charca de Suarez the long way round in order to check if the local Shag(s) might still be present at Charcuna to the east of Motril.  Ten minutes scanning the sea in front proved negative so scope back in boot and car started for the onward journey.  Then I looked out of the car, which was parked facing the sea, and there was a dark bird on the water somewhere between 20 and 30 metres off shore.  Bins and scope back in action and able to make a positive identification of a juvenile Shag.  Much pleasure albeit I did wonder where the other juveniles and adults might be that were recorded in the same general area within the past fortnight.  A very happy me then drove on to the Charca arriving in time for the 6pm opening where I spent the next ninety minutes.

Collared Doves as I entered the reserve followed by a Turtle Dove, half-dozen Serin, a pair of Great Tit and a Blackcap as I headed straight to the bamboo hide overlooking the Laguna del Taraje where, much to my surprise, I found an empty water.  Eventually a Purple Swamphen put in a brief appearance and a Spotted Flycatcher posed for a lengthy time in the shade of the bare tree in front of the hide.

Reed Warblers as I moved on to the large hide overlooking the Laguna del Alamo Blanco where, once again, little to be seen n the ow overgrown vegetation.  A Little Egret landed and disappeared at the far end and in the channel to my left a Moorhen and the only Glossy Ibis seen during the visit.  On the other hand, there were a number of House Sparrows feeding tin the area.  The track leading to the back gate produced both Cetti's Warblers and Nightingales along with a handful of Goldfinch and then it was on the main hide over looking the Laguna de las Aneas recording a number of Blackbirds on the walk.

Checking the water there appeared to be a similar number of both Common and Red-knobbed Coot along with a score or more Mallard and a handful of Moorhen.  Just a couple of Little Grebe and a another Little Egret and Purple Swamphen.  Overhead many feeding House Martins and less than a dozen Barn Swallows.  Just the one Black-headed but no shortage of Yellow-legged Gulls.

A couple of minutes before reaching the track leading up to the northern hide overlooking the Laguna del Trebol a large tree was blown down by the increasing wind and blocked the path so on round to the far hide on the southern side of the water passing more Turtle Doves.  More Red-knobbed Coots, Moorhen and House Sparrows along with a single White Wagtail. 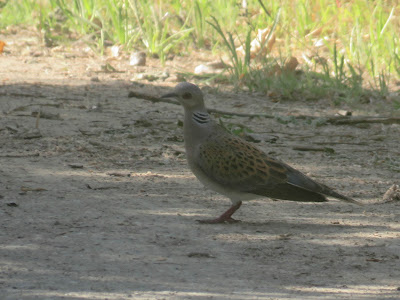 Just a pair of resting Red-knobbed Coots at the Laguna del Lirio so back to the car and check the Camino Patria at the back of the reserve.  First an Iberian Yellow Wagtail quickly followed by a trio of Rock Doves, Spotless Starlings and a pair of Hoopoe so rounding up to a total of 30 species for the evening. 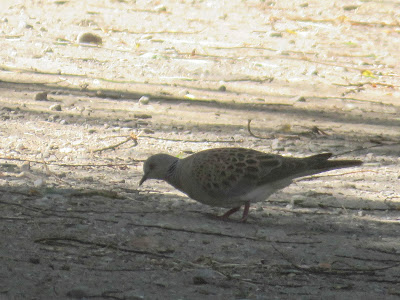 Posted by Bob Wright - The Axarquia Birder at 23:21