Three excellent days of birding in Sevilla and Cadiz province with my dear friend Derek Etherton. And even the weather was in full cooperation with warm sunshine yet a little broken cloud to keep away the extreme heat.  Osuna on Thursday morning had target birds of Montagu''s Harrier and Roller whereas in the afternoon at Los Palacios de Villafranca we were hoping top find the elusive Laughing Dove.  A couple of nights in Alcala ought to provide plenty of Lesser Kestrel then Friday's visit to Trebujena had Rufous Bush Chat as the prime target bird to be followed by something different nearer the ponds and salinas close to the Guadalquivir near Sanlucar de Barrameda followed by a stop at Chipiona on the way back to Alcala to find the resident breeding colony of Little Swifts.  Finally, a stop at the Marismas de Cetina on the outskirts of Cadiz city would hopefully provide both Collared Pratincole and Short-toed Larks on Saturday morning before setting out on the long journey back to Malaga. Eight target birds and all achieved; now that's some great birding and we also managed to record over 90 species in total.

Following our breakfast on arriving at Osuna we were soon seeing many of the expected birds but it soon became obvious that there were many Turtle Doves about and this was to be a feature of the following days.  A Spectacled Warbler quickly followed by a Hoopoe then Spanish Sparrows and Ravens as we awaited one of our target birds.  It seemed everything but as we recorded Marsh Harrier, Kestrel and White Stork followed by Short-toed Lark (earlier than expected) then a couple of Calandra Larks.  At last our first Montagu's Harrier of the day.

Even better as we worked our way round the back of the "Triangle" not just Bee-eater and Corn Bunting but a number of Lesser Kestrels near the ruined farm on the back track and then, at last, our one and only Roller of the morning and, indeed, the whole visit.  More excitement to follow as our first Cattle Egrets were followed by a Black-shouldered Kite and then Black Kite.  Even the Magpie was a pleasant surprise.

On then to Los Palacios de Villafranca where we hoped, given previous instructions re location, to find one of the handful of resident Laughing Doves.  And what some finding it took only claiming our target right at the end of the visit when we had all but given up hope.  Gull-billed Tern overhead then a passing Purple Heron as we checked all the trees in the river bed below. Bee-eaters above along with more Black Kites and Spanish Sparrows.

A walk along the top track on the opposite side of the dry river bed to the dirt road led us to a fabulous flooded area with hundreds of Glossy Ibis and many Spoonbills as a starter,  Little Tern, Purple Swamphen and both Cattle and Little Egrets whilst behind us a Red-rumped Swallow and many calling Nightingales.  Lots of calling Reed Warblers and then a lovely Woodchat Shrike resting on a fallen log and our first Sardinian Warbler of the dat.  Above us a circling Booted Eagle as we made our way back to the car and, at last, we heard the Laughing Gull and as we waited and searched the bird flew a short distance between trees and I managed to catch a brief view as it walked deeper into the foliage at the centre of the tree.

So on to our accommodation in Alcala where we were surrounded by a mixture of House Martin, Pallid Swift and Lesser Kestrels.  What a welcome; and the same was to follow on the second evening.

Come Friday we were away by 7.50 for the drive to Trebujena and ere leaving a visit to the roof terrace by Derek not only produced Lesser Kestrels, House Martins and Pallid Swifts but also a passing Peregrine Falcon.

Given for potential sites we were at the first by 9 o'clock and within three minutes a Melodious Warbler who vacated his perch in the tree immediately in front of us to be replaced by the handsome Rufous Bush Chat.  And we watched it for many a minute or more along with passing House Martin, Common Swift and a close Woodchat Shrike.  Likewise, the second site came up trumps with two Rufous Bush Chats as did the fourth site albeit we were unsuccessful at the third site.  The final site also produced Marsh Harrier, Pallid Swift and Black Kite.

On down to the outskirts of Trebujena near the Rio Guadalquivir where we had a range of birds on the new reserve albeit we had to observe from the road as the gate never seems to be open.  Almost immediately a Red-crested Pochard with ducklings and the first of a handful of Purple Swamphens.  Little Grebe, Flamingos and many Spoonbill along with Common Pochard, Heron, Little Egret and many Avocets added to the attraction.  Then came the couple of  Collared Pratincoles, many Iberian Yellow Wagtails, Zitting Cisticola, Black-tailed Godwit and Purple Heron. On the far bank of the mighty Guadalquivir a lone Great White Egret.

On next to the large pool at the edge of the woods adjacent to Algaida near Bonanza.  Night Heron and both Little and Cattle Egrets plus a couple of Kentish Plover and a small number of Glossy Ibis and White-headed Ducks.  In the reeds Reed Warblers and a couple of Little Ringed Plover. Both Marsh Harrier and Black Kite were also recorded.

Moving on round the corner we visited the two pools on the outskirts of Sanlucar de Barrameda we found very many White-headed Ducks along with more Red-crested Pochards, both Common and Pallid Swifts.  A walk through the neighbouring pine trees then produced Spotted Flycatcher, Common Waxbill and Nightingales but, best of all, a Great Reed Warbler.

The final stop was at the commercial fishing port at Chipiona where, due to the light shower, all the local Little Swifts were feeding low and in and out of their colony nesting site.  So back all the way to Alcala and more of the expected Lesser Kestrels, etc. 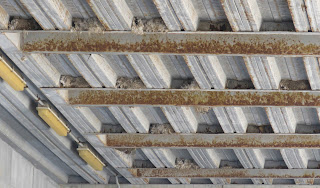 Time to set off back home come Saturday so an early start to enable us to visit the now accessible reserve at the Marismas de Cetina where the salina pools are superb during migration periods.  Nevertheless, we soon saw our target birds of Collared Pratincoles and Short-toed Larks.  In addition plenty of Glossy Ibis and Iberian Yellow Wagtails before checking the water itself where we found many Flamingos, Kentish Plover along with a few Redshank, many Black-tailed Godwits plus a couple of Lapwing.  Also mainly Yellow-legged with a handful of Black-headed Gulls but, in addition, a small group of Slender-billed Gulls. The occasional sighting of Little Terns added to the attraction. Breeding White Storks, more Cattle than Little Egret and both a single Spoonbill and Night Heron flew over during our visit. In addition to the Mallards there was a small number of Shelduck and, of course, very many Black-winged Stilts and Avocets. 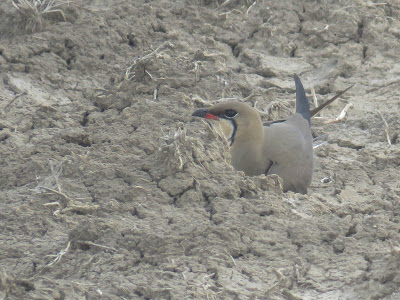 Raptors included Marsh Harrier, Black Kite, Griffon Vulture and Booted Eagle and as we left a single Sparrowhawk. As we left the salinas we found a lone Turnstone and then a stop in the trees at the entrance produced a number of Greenfinch, Sardinian Warbler, Crested Lark, Red-legged Partridge and a Spotted Flycatcher.

What a way to end some fabulous birding over the past three days and and 90 species recorded. 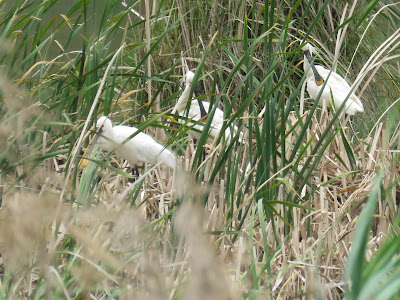 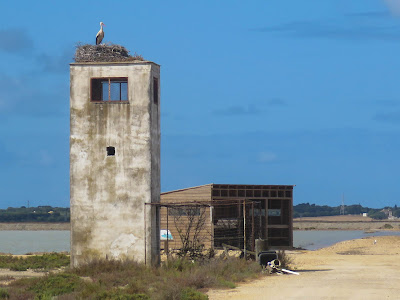 Posted by Bob Wright - The Axarquia Birder at 12:39