Another beautiful, warm and sunny start to the day albeit a cool, light breeze when exposed in the more open elements.  A the Titchfield Canal car park by 9.30 and first a walk with the scope as far as the second pool to check the bird life before returning to the car to deposit scope and walk through the adjacent spinney before taking off down the can al path once again and this time right on for a couple of miles.

No sooner out of the car than a visiting Wren, the first of five that I was to see in the next hour.  also present both a Robin and a couple of Magpies then the massed sighting of all the widespread Wood Pigeons.  A Carrion Crow flew over as I approached the Barn Owl site but no sign of the bird on this occasion.  Given the length of his absence  can only imagine that the bird has moved on in search of a new mate and/or a better nesting site.

Resting here I was able to scope the first pool and find many Black-headed but also a handful of Lesser Black-backed Gulls.  Most of the ducks seemed to be sheltering out of site under the bank but both Mallard and Canada Geese were on the open water.  Once again, just the one Lapwing noted.  Great Tits were calling as I made my way to the second pool where I found even more Black-headed Gulls along with a single Little Egret.  In addition to many Canada Geese thee was also a small number of Greylag Geese along with a few Shovelers.

Making my way back tot the car i stopped to admire the circling Sparrowhawk and then, once scope deposited, made my way through the little spinney picking up more Wrens and Greenfinches before re-joining the canalside path.  The field beyond the canal held not only foraging Wood Pigeons but also a dozen Jackdaws also searching the grassy soil.  On the wires above me a resting Stonechat but the facing light prevented a half-decent photograph.

Continuing on down the path more Great Tits, Wrens and a first Blackbird plus a Cetti's Warbler.  Before returning to the car I was to identify a further three Cetti's in the area.  The first Blue Tits were finally seen as opposed to being heard an then the sighting of those lovely little Long-tailed Tits. 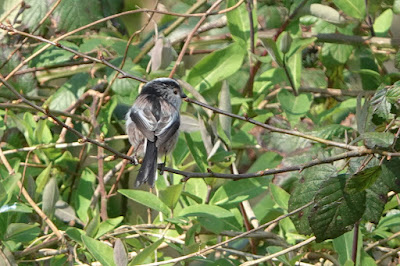 Meanwhile, a Pheasant was calling on both sides of the canal  and having started the return walk I also added many Chiffchaff and a "yaffling" Green Woodpecker.  Upon reaching the pools the ducks were now more visible along with the very many Black-headed Gulls and Coots which produced a number of both Gadwall and Shoveler in addition to the Mallards plus a dozen or so Teal and thirty Wigeon.  The pair of Shelduck and another Little Egret were somewhat of a bonus.  Right at the back of the end water a lone Heron and then, high above me, a circling Buzzard to complete the morning.

Check out the accompanying website at http://www.birdingaxarquia.weebly.com for the latest sightings, photographs and additional information
Posted by Bob Wright - The Axarquia Birder at 07:05