Gradually working our way home after visiting brother in Nuneaton yesterday afternoon and this morning.  Time, therefore, to make a quick stop at Rutland Water before driving on to Eyebrook Reservoir before spending the night close by in Uppingham.  Still beautiful weather with very warm temperatures, clear blue skies and hardly any wind.  First stop at Lyndon where we duly recorded many Blue and Great Tits along with Cjaffinch, Reed Bunting, Dunnock and Blackbird.  A pair of Mallards and a Moorhen were on the pond next to the feeders with both cock and hen Pheasants plus Wood Pigeons on the grass.

Moving on to the main reserve in Egleton we stopped at the inlet bridge and were able to see the newly arrived Ospreys with the female having returned about eight days ago and the male yesterday.  Arriving at the car park we soon added House Sparrow and both Jackdaw and Carrion Crow and the local rookery seemed to have moved nearer the Visitors Centre with plenty of activity by the local Rooks. The first Robin was also recorded waking towards the feeders. 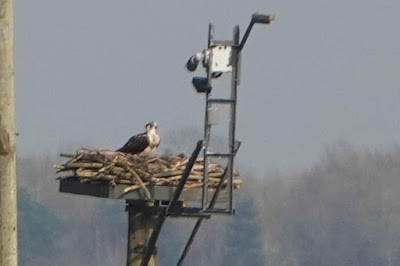 Once inside the the VC we noted Canada and Greylag Geese along with Mute Swans on Lagoon 1 and then the many ducks including Red-crested Pochard, Mallard, Tufted Duck, Wigeon, Teal, Gadwall and Pintail.  Also present were Coots, Cormorant and Great Crested Grebes.  Only Black-headed Gulls on this water but we did find a single Oystercatcher on one of the nearby small islands.

Jenny heard the saw a Wren as we made our way back to the car for the relatively short drive over to Eyebrook Reservoir.  Stopping first at the little car park below Stone Dry we found more tits along with Chaffinches and Blackbird, no doubt encouraged by the voluntary use of feeders in the trees to attract in various small birds.  Lots of Mute Swans and both Canada and Greylag Geese to be seen along with a variety of ducks and Great Crested Grebes but with the sun in our eyes it was best that we travelled round to the far side of the water.  A stop at the small bridge revealed more tits, Moorhen and Pheasant in the area and so onto the first view point.  Lots of Cormorants and very large numbers of Black-headed Gulls but also a pair of Common Gulls.  On the far side a single Little Egret and a Heron then a look at the field on the opposite side of the road produced a handful of Red-legged Partridges and a roosting Buzzard.

Moving on we found the recently reported Slavonian Grebe on the far side next to a Lesser Black-backed Gull.

A little further as we started to climb the hill we stopped at the next feeding area and here found not only Chaffinches, Blue and Great Tits but also a handful of Yellowhammers.  A cock Pheasant seemed happy to just sit and watch the world go by whilst behind him a pair of Red-legged Partridges were making a hasty retreat away from watching eyes.

Working our way round to the far end of the reservoir we also added a couple of Starlings, a single Great White Egret watching over a small pool, Kestrel and more Robins.  Over an hour at this site but by the time we left to make our way to the evening's hotel we gad actually recorded 43 species.  Most rewarding,

Check out the accompanying website at http://www.birdingaxarquia.weebly.com for the latest sightings, photographs and additional information
Posted by Bob Wright - The Axarquia Birder at 14:56