A great morning's birding in the New Forest, Hampshire.  The last of the light drizzle as I set off and by the time, 45 minutes later, I arrived at Blashford Lakes near Ringwood the Sun was fighting its way out into clearing skies and all was calm.  Stepping out of the car in the VC car park and facing away from the lakes, a Great Spotted Woodpecker was bust hammering away to my right and a Tawny Owl calling from the left.  Being the visit visitor to arrive at the site, straight to the Ivy North Hide accompanied by many calling Great Tits.  Also seen on the short walk Blackbirds, Magpie and Wood Pigeon.  No sooner had I walked into the hide than I saw the stationary Little Egret and a pair of Teal in the open channel in front.  Turning to move to the other end of the hide I immediately saw the great White Egret posed near the Mute Swan's nest but before I could get the camera out the egret had disappeared.  Not to worry as I scrutinised the dead reeds in front in search of the wintering Bittern.  And for a change, success!  There it was skulking around not five metres away from me.  Unfortunately, this hide has fixed windows so one thing seeing the bird with the help of binoculars but trying to get a photograph was an entirely different proposition.  Nevertheless, I have a "brown blob" in the reeds to remind me.  And just think, less than ten minutes on site and three new sightings for the year.

Once the Bittern seemed to have disappeared I concentrated on the lake itself with its many Tufted Duck and Wigeon near to hand.  A pair of Mute Swans arrived for the left, a pair of Great Crested Grebes from the right and always a constant supply of Black-headed Gulls.  On the far bank a few Shoveler and even  a couple of sunning Cormorants.  A Coot was moving around in the reeds and then a Heron alighted in the open channel.  perhaps a fitting finally was the singing Cetti's Warbler right in front of the hide.

With all the initial excitement completed time to make my way through the trees to the Woodland Hide passing Jay, Carrion Crow and Song Thrush plus an overflying trio of Greylag Geese. Approaching the hide a female Bullfinch took flight from the neighbouring bushes.  Once inside the empty hide I was able to use the corner seat just inside the door with the only opening window facing the feeders. Almost immediately the arrival of a continuous supply of Siskins, by far the dominant species, along with both Chaffinch and Goldfinches.  Ere long the Nuthatch joined the feeding frenzy whilst no less then four male Reed Buntings worked the area below the feeders.

It was not so much the visiting Great Tits that caught my attention as the Lesser Redpolls, arriving at regular short periods.  On the other hand, it seemed ages before the arrival of the first Blue Tit  but then a constant flow.  Finally a couple of Dunnocks put in an appearance before I made my way to the next hide. 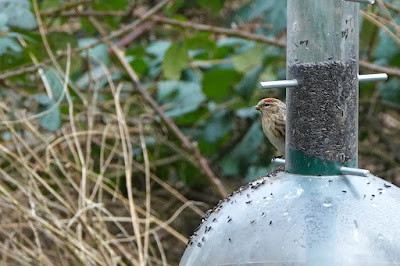 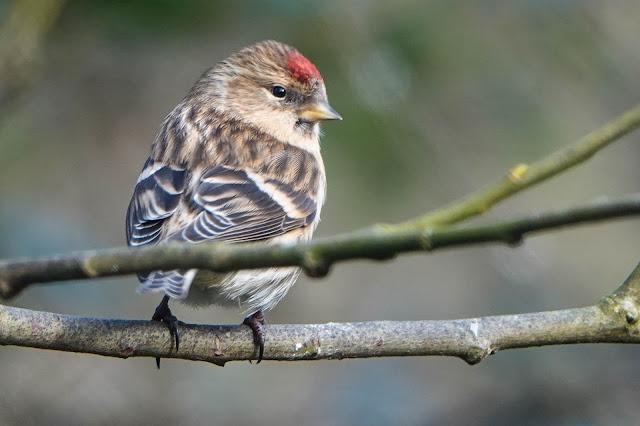 Approaching the Ivy South Hide a quartet of mallard on the small pool on the right and then the sight of massed ducks and gulls at the southern end of Ivy Lake. Loads of both Black-headed and Herring Gulls along with vey many Gadwall and Wigeon.  A few more Cormorant and the occasional Mallard, Mute Swan and Coot.

Making my way back to the Woodland Hide I found a pair of Long-tailed Tits and the first Robin of the morning.  However, once inside the hide, concentrating on the opposite side this time, more Robins along with the massed ranks of Siskin and even the Lesser Redpolls.  No shortage now of Blue and Great Tits along with visiting Blackbirds and a  Great Spotted Woodpecker flew past then returned to make use of the feeder.

Time to take the car across to the Tern Hide overlooking Ibsley Lake before thinking of my next port of call.  having watched the circling Red Kite I entered the hid and almost straight away the Red Kite had been joined by another and the pair of raptors started working the edges n the far side in search of a tasty meal or two.

To my immediate left not only a male Goosander but a single Common Scoter.  To the right many resting Black-headed and a few Herring Gulls.  The centre water at least half-way back held a good-sized flock of Lesser Black-backed Gulls and, in addition to the Tufted Ducks, there were at least 15 Goldeneye with probably more females than males.  Finally, right at the very back of the water, a single Canada Goose next to a pair of Mute Swan and as I departed a Buzzard overhead.

Just on midday so decided to take a slight detour on the way home with first a visit to the relatively close Eyeworth Pond.  Mallards and Moorhen immediately on the scene with the many tits feeding on the seed along the top of the wooden barrier and posts.  A Mandarin Duck was sheltering under branches on the far side but then a second making its way across the pond to the far side.  It was later to return for a closer sighting in full view.  Not just Blue, Great and Coal but also a couple of Marsh Tits. The Nuthatch was a regular visitor along with sightings of Chaffinch, Dunnock, Robin, House Sparrow and Blackbird.  To make up the numbers even a Magpie and a handful of Starlings.

Twenty minute later I started my drive back to Warsash but taking a slight diversion to stop on the road beside the main pool at Fishlake Meadows.  All seemed very quite and a great shortage of birds.  Yes, a few Black-headed and Herring Gulls and a small number of Wigeon, Teal, Tufted Duck and Coot but then the searching.  Cormorants roosting at the back but then a strange "blob" resting atop a small pile of reeds.  With the scope I could hardly believe my eyes as I recognised the Egyptian Goose. I soon found both Shoveler and Gadwall and eventually a single Pochard.

Back home at 2 o'clock having recorded 54 species including four new sightings for the year. 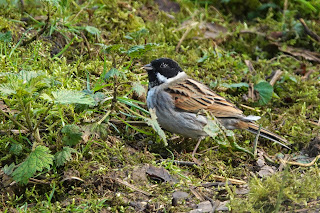 Posted by Bob Wright - The Axarquia Birder at 03:00