A beautiful clear and sunny start to the day so off to the New Forest after breakfast for a morning at Exbury Gardens and Steam Railway - and yes, we did travel the railway circuit upon arrival.  Very enjoyable walking around and background of singing birds but only a handful sighted, mainly Great and Blue Tits along with Blackbird plus both Carrion Crow and Wood Pigeon.  However, towards the end of our walk round the gardens were fortunate enough to see a circling Buzzard.

Departing the gardens we drove south to the nearby Solent coast at Lepe where the tide was full in and most of the very many Black-headed Gulls resting in the adjacent inland pools.  However, checking carefully we found a nearby Redshank and a little further away towards the main pool a single Little Egret and a couple of Shelduck.  Moving  a short distance tot he west we were able to pull off the road and observe the score or more Brent Geese and here, amongst the Black-headed we also found a handful of Mediterranean Gulls.  A Little Egret made a short flight around the sheltered water and behind us both Chaffinch and Magpie were noted.  Time to enjoy the scenery and views across the Solent to the close Isle of Wight before driving to the north of the Forest to pay a short visit to Blashford Lakes.

Arriving at Blashford Lakes we started at the Tern Hide overlooking Ibsley Water. A good number of Back-headed present but also Common, Herring and Great Black-backed Gulls.  Hiding behind a group of gulls we found an Oystercatcher and a few Teal.  On the water itself mainly Tufted Ducks and Coots along  with maybe as many as ten Great Crested Grebes.  Towards the back of this large lake we then found a good-sized flock of Shoveler along with a small number of resting Cormorants and a handful of Mute Swans.  Small numbers of Wigeon were also found towards the back.  Scanning with the scope we also recorded a pair of Egyptian Geese.

Moving over the Visitors centre car park we made our way o the Ivy North Hide.  No shortage of Great Tits seen and heard along with both Blue and Long-tailed Tits.  From the hide mainly Wigeon and Great Crested Grebes plus a pair of Mute Swans and a pen sitting on her nest just below the hide.  In the distance a number of Cormorants and very many Black-headed Gulls.

Walking through the trees to wards the Woodland Hide we heard both Great Spotted and Green Woodpeckers and had a close visit from a friendly Dunnock.  A couple of Blackbirds and then safely ensconced in the hide to observe the small birds making use of the feeders.  Lots of Chaffinches and both Blue and Great Tits before the Goldfinches appeared.  Whilst we had expected many Chaffinches it was a lovely surprise to see a good number of Bramblings with the males beginning to show their black birds as they completed their pre-breeding moult.  In addition, many male Reed Buntings and a visit for one of the local Lesser Redpoll plus the, it seems, ever present Siskins. 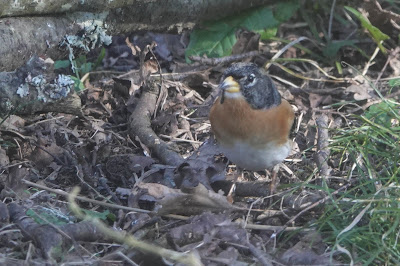 Moving on to the Ivy South Hide we had more Blackbirds and Chiffchaff along with a Robin. But, passing the small water to our right, we stopped to watch the resting Kingfisher before it flashed away.  Once inside the hide we had very close views of the many Black-headed and a few Herring Gulls.  Great Crested Grebes and a pair of Mute Swans were also present as was the main flock of Wigeon.  Finally, a pair of Gadwall to our left before finding the solitary Magpie and, just at that moment, the Kingfisher flew right in front of us in the hide, landed ion a tree less than five metres away and then returned from whence it had come at a fast rate of knots. 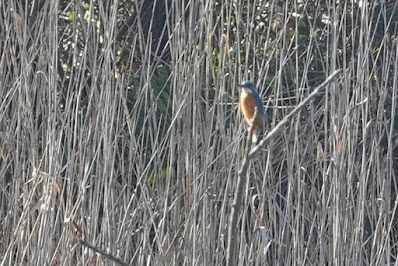 It was as we made our way back to the car park that we found our first Moorhen of the day and leaving the site encountered a half-dozen Jackdaws.  A most worthwhile and enjoyable 80 minutes.

Posted by Bob Wright - The Axarquia Birder at 15:22