Eventually forced myself out of be and still at Rutland Water by 7.30.  Unfortunately, the beautiful clear and sunny start was spoilt by the very strong, cold wind.  Not the least in that it also neutralised any help that I might have received from wearing my hearing aids!  On the other hand, all the local birds seen from the bedroom window were to put in an appearance on site so a final total of 42 species, given the time of year and very windy conditions, was a good reward for my two hours.

The fields approaching Egleton held the usual Wood Pigeons along with over an hundred Canada Geese plus Jackdaws and Carrion Crows.  Barn Swallow, Starling, Pied Wagtail and House Sparrow were also recorded before arriving at the car park.  Once again the Feeding Station was deserted and no evidence of neither the necessary management nor food in the feeders.  However, on exiting the screen both a Robin  and Blackbird were awaiting me outside.

A visit to the Redshank Hide produced the expected Sand Martins and Mallards and then straight on the  Sandpiper Hide overlooking Lagoon 4.  No waders other than Lapwings to be seen but still plenty of Mallards and Black-headed Gulls along with a Little Egret.  A couple of Mute Swans drifted by along with a feeding Teal.  Surprisingly not many Coot on show but many more Canada Geese and, right at the back, a couple of Egyptian Geese and then the arrival of eight Greylag Geese.

So on to the Shoveler Hide overlooking Lagoon 3.  At last the water level had dropped to reveal the small bar opposite the hide upon which a number of Common Tern, Black-headed Gulls and Mallards were resting.  Working the edges a Green Sandpiper and in the water a lone Oystercatcher.

Away to my far left, in the corner just beyond the duck trap, a Great White Egret was hiding in the reeds but eventually lifted its head up and out to reveal the solid yellow beak, so confirming identification.  Just in front both a number of Pochard and a Common Sandpiper was working its way along the edge of the water.

Beyond the bar on the open water a good-sized flock of Tufted Duck along with a few Great Crested Grebe. Back on the bar I noticed a sleeping Common Tern as the Moorhen wandered along and on the right-hand edge a single Black-tailed Godwit.  In front of me in the reeds a Reed Warbler presented a short sighting in addition to the repeated calling.

On to the Buzzard Hide  where I found a female Tufted Duck with half-dozen young including one riding her back.  Making my way back to Lagoon 4 I spent a while checking out the water from the Plover Hide in order to check the northern side of the water.  Lots of Lapwing and more Common Tern plus both Mallard and Tufted Duck on the water in front of me. Way over the far side on a sandbank I picked up a number of Great Black-backed and a few Herring Gulls.

A very quick visit south of the Visitors Centre to the Mallard Hide simply confirmed the very large number of roosting Cormorant along with many duck and both Canada and Greylag Geese.

The usual anti-clockwise drive round the water to check out Manton Bay which duly produced an Osprey and a Lesser Black-backed Gull along with many more Great Crested Grebes, before heading on to the Lyndon Visitors Centre.  Here the feeders were in use and my ten minute stay produced both Great and Blue Tits along with both Chaffinch and Goldfinch.  Not just a couple of Carrion Crows also visiting the feeders but also a Magpie.  And so back home in Stamford but not before noting the Red Kite drifting past the tree tops to my left as I left Edith Weston towards the dam. 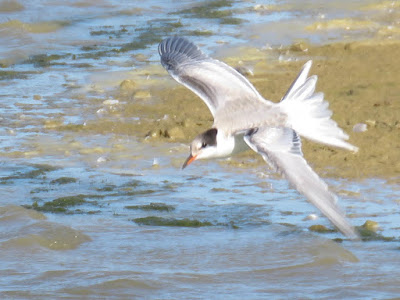 Check out the accompanying website at http://www.birdingaxarquia.weebly.com for the latest sightings, photographs and additional information
Posted by Bob Wright - The Axarquia Birder at 06:24