Time for Jenny to make her first venture away from the house after eight days so the short drive over to the Meon shore adjacent to Titchfield Haven where she was able to sit in her support chair and then make a slow walk along to the Titchfield haven Visitors Centre for a coffee, taking in the activity in the Mean harbour and river outlet.  Naturally, we both took binoculars and a camera on the off-chance that the recently seen Roseate Tern might still be about (it was not).  The water was approaching the high tide mark so limited exposed shore and becoming very hot with many visitors enjoying the seaside. Twenty species recorded but obviously a need to return when tide much lower and, preferably, well before 7am.

On the main pool reserve pool seen from the road a couple of Canada Geese and many Mallard along with the expected Black-headed Gulls and Common Terns.  Walking along the road o the viewing point overlooking the nesting platforms and main island, more of the same plus a Little Egret and two Cormorant.

A Coot was working the far side of the water and a Moorhen was resting to the front of the island.  Time to check out the emptied harbour where a good number of resting Mallards were awaiting me along with a trio of Turnstone, a few foraging Black-headed Gulls and a solitary Wood Pigeon.  Just the two Mute Swans moving around in the river outlet itself and, looking up, a couple of Carrion Crows were flying over the reserve.

A stop for coffee and ice cream, well it was extremely hot, and a chance to check the Cottage Hide where the only visitors were a Wood Pigeon, Blue Tit, Greenfinch and handful of House Sparrows, before the short walk to see what might still be seen on the southern shore.  Lots more Black-headed Gulls and Mallards plus a second Little Egret.  Yet more Turnstone, probably totalling a dozen in all on the site, the the finding of a single Oystercatcher plus a Great Black-backed Gull and a couple of Herring Gulls.  Making our way back to the car for the return journey a Magpie was seen leaving the harbour and heading off towards the reserve and no sooner in the car than a Blackbird crossed the road in front of us. 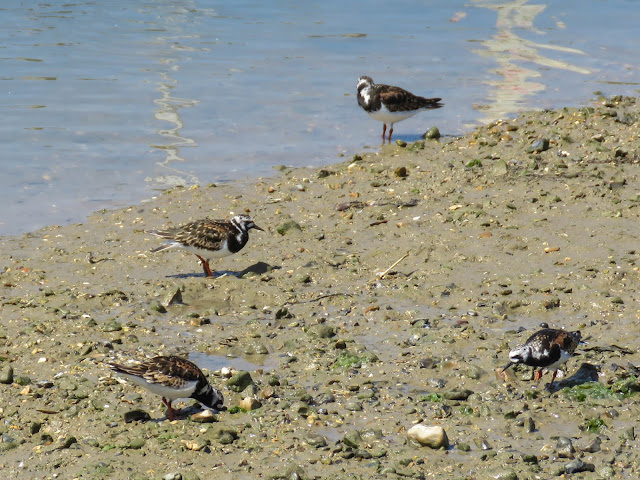 Check out the accompanying website at http://www.birdingaxarquia.weebly.com for the latest sightings, photographs and additional information
Posted by Bob Wright - The Axarquia Birder at 10:00