Back to Rutland Water and, again, at 6.30 but this time in the evening rather than morning.  After a lovely, bright and sunny day by the time I arrived it was still basically clear but the breeze starting to freshen and, of course, the setting sun not too good for photography depending upon direction.

Straight to Burley Fishponds passing Pied Wagtail, Carrion Crow, Wood Pigeon and Pheasant on the way only to discover that the site is no longer accessible!  Therefore, a little further on to the lane leading down to the water but almost nothing within site on the North Arm other than a Great Crested Grebe and passing Common Tern.

Back and towards Egleton and the meadows adjacent to the country lane had been recently mowed, so attracting scores of Greylag Geese, a similar number of Rooks, a few Carrion Crow and a couple of Magpie.  Checking the small resting flock of black-headed Gulls at the back I came across what is almost certainly a couple of 2nd winter Common Gulls.  More Greylag Geese round the corner on the next field and on the opposite side of the road a few more Greylag Geese in with at lest an hundred Jackdaw.  I am sure that, in total, there are well over an hundred of of both Greylag Geese and Jackdaw on site.

Once in the car park the first Blackbird of the evening and chance to put the scope on Lagoon 1 from near the Visitors Centre.  No shortage of Mallard along with both Coot and Cormorant plus the odd Mute Swan or two.  Time to move on to the Redshank Hide which duly produced the resident Sand Martins.  The Grebe Hide added Teal but nothing new at the Osprey Hide.

And so to the Sandpiper Hide overlooking Lagoon 4.  Immediatley more Mallard and very many Mute Swans.  Checking the various islands and waters I soon added Lapwing, lots of Black-headed Gulls but also a few Great Black-backed and a pair of Lesser Black-backed Gulls.  There were many mallard but also a small number of Tufted Duck.  Close by was a foraging Greenshank and on the far side a single Common Sandpiper.  The Oystercatcher was also a lovely addition but , bet of all, the well-grown juvenile Avocets along with an adult.  Presumably, the lovely waders bred on site.  Finally, in addition to yet more Greylag Geese this was the water that produced the only Canada Geese of the evening.

The Shoveler Hide on Lagoon 3 was rather disappointing but mainly as a result of the very high water level.  Apart from more Coot, Mallard and Black-headed Gulls very many Common Tern, a few Lapwing, a single Moorhen and a passing Little Egret overhead.  On the other hand, there were also a couple of swimming Egyptian Geese.

Back to Lagoon 4 and the Plover Hide to check out the northern end of the water but the sun was now very low and almost straight into the hide.  More Black-headed Gulls and Common Terns with young plus a sole Little Grebe and, on approaching the hide, a Heron had flown over.  A brief stop at the Bittern Hide finally produced a couple of Pochard on Lagoon 3. 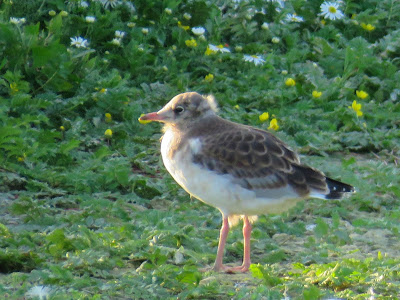 Woking my way back to the Visitors Centre a Buzzard took off form the trees to my left and as I approached the Badger Hide I noticed the small bird at the top of the bare branches in front of me.  Whilst trying to take a distant record shot of the Linnet a second individual joined my target before both then moved on.

Having decoded to forego a visit to the Mallard Hide I made my way back to the car and drove through the centre of Egleton village where I recorded both House Sparrow and Barn Swallow.  Finally, as I drove up the hill towards Barnsdale on my way back to Stamford a Collared Dove crossed the road in front of me so taking the evening's total up to 39 species.

Posted by Bob Wright - The Axarquia Birder at 07:13