A Purple Sandpiper was reported at Benalmadena Marina about a week ago but would it still be present when Jenny and I arrive not long after 9 o'clock this morning?   Having walked along the high seawall to the far end there was no sign of the wader.  The sheltered pools beyond the rusty fence on the harbour side appeared to be the obvious choice but all was quiet.  As for the seaward side of the breakwater, the large boulders and groins were too steeped to be able to see the water's edge and there certainly appeared to be nothing resembling a pool as depicted in recent photographs.  On the other hand, the photographs had shown no indication of a fence so what to do.  Checking again with my instructions I was definitely in the right area where the wall took a sharp turn inland.

Nothing for it but to step out onto the boulders and see if I could peer over the side.  All that came to me were the half-submerged weird-shaped concrete groins that are use to lock the breakwater into place before, or a the ae time, as the large boulders are deposited to build the defence.  Almost at the apex of the bend in the breakwater as I headed out and looked and the first thing I saw was a handful of these weird concrete building units.  But as I looked I was amazed to see not one but two Purple Sandpipers feeding on the damp algae attached to one of the exposed arms of the concrete unit..  Whoopy!  Out came the camera and just hope that I may have taken a half-decent photograph of the waders.

But not just Purple Sandpipers.  Making our way along the breakwater we had a couple of passing Cormorant and there were eleven Lesser Black-backed Gulls resting on the sea just off the breakwater.  Returning to the marina entrance for a coffee we stopped to watch a couple of fishermen washing their mussel catch and we were joined by a quartet of Turnstone who also appeared to be interested in what was gong on in the next boat. 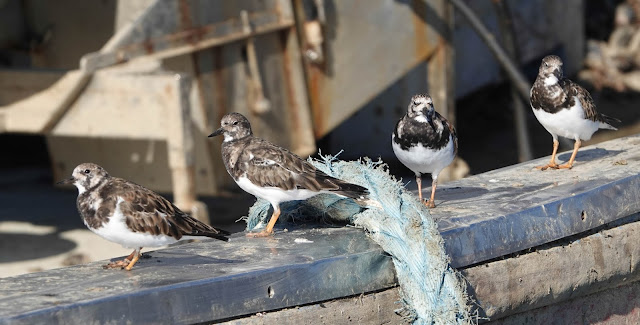 Back in the car park we quickly noted the Collared Doves, Spotless Starlings, Blackbird and House Sparrow before driving into Benalmadena town to take a walk round the lake just inside the lovely park.  Lots and lots of Feral Pigeons and Monk Parakeets plus many more Collared Doves, House Sparrows and a Blackbird whilst on the water mainly Mallard but also a Gadwall, a couple of Muscovy Duck, Coots and a Moorhen.  Even a single duckling, probably about a month old.  Now I wonder whether his siblings may have been the main meal for the local gulls? 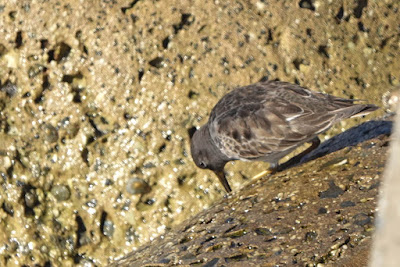 Posted by Bob Wright - The Axarquia Birder at 08:57